Mobilization by municipalities to end violence against women

Ending violence against women, one of the most pervasive violations of women's rights, requires concerted efforts worldwide. Municipalities play a key role in the global movement to address the issue, as illustrated by the Metropolitan Municipality of Lima.

Since January 2011, Lima has had the first democratically elected female Mayor, Ms. Susana Villaran, who has undertaken unprecedented reforms to turn Lima into a city free from violence against women, where women feel safe and services for female survivors are not only a proposed plan, but a lived reality. 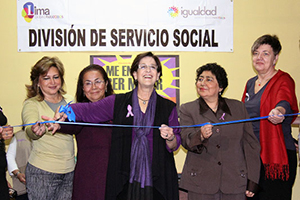 What are the issues faced by women regarding gender-based violence in the city of Lima?

Violence against women is a serious concern in Peru and more specifically in the city of Lima, where statistics reveal that 4 out of every 10 women have suffered violence. These figures reflect, however, only intra-family violence and increase if we include violence in public spaces, harassment and touching or grabbing. One of the main problems we face is that prosecution and protection mechanisms are weak and ineffective. Over the last years, we have also seen an increase in cases of femicide across the country.

When it comes to safety in public spaces, women live in their cities with a continuous perception of insecurity as violations and kidnappings are common. In the public transports, they risk being robbed and harassed and in their own districts, they cannot walk freely in many areas, which they avoid due to fear of being assaulted.

In Lima, the district of Cercado receives 22 per cent of all the reports of sexual assault against women and 17 per cent of the reports of domestic violence of the city of Lima. This is despite having only 0.4 per cent of the entire city population, 300,000 of its 9 million. For this reason, Lima Cercado is one of the seven districts targeted by the Municipality through the project supported by the UN Trust Fund to End Violence against Women.

As the Convention of Belem do Para states, tolerance to violence is a form of violence in itself and this is actually one of the challenges we face in Lima, where there is widespread social acceptance and tolerance of the issue and often times women are blamed for the violence they suffer.

What is the role of the Municipalities in the global efforts to end violence against women?

Municipalities are called to play a crucial role in the global struggle to end violence against women mainly because of their proximity to women and their better understanding of the problems they face, including gender-based violence. This also allows the Municipalities to establish mechanisms that respond better to this issue. Municipalities are called to lead the shift towards a new model of local governance that puts the improvement of human condition and women's rights at the center and promotes women's participation in decision-making, allowing them to voice their priorities and concerns.

Municipalities can also promote a new approach to citizens' security that goes beyond uniformed personnel and that addresses violence against women from a women's rights perspective, not only in public spaces but also in the domestic space, capturing the continuum of these two spheres. When people talk about governments' accountability to end violence against women, they tend to forget that municipalities are part of the State and, therefore, also accountable to put an end to this.

Regarding provision of services for women survivors of violence, municipalities are well-positioned to strengthen coordination across their departments, hence securing the integral and holistic services that these women need.

What are some of the best practices of the project to address and end to violence against women in the city of Lima?

The project is promoting a new model of local governance that promotes women's participation in the decisions that affect their lives. We have established a Metropolitan Assembly where women have the space to voice their priorities on policies and plans of the Municipality.

This year, for the first time, girls have also participated through the “Consultative Council for Girls, Boys and Adolescents of Metropolitan Lima, which provides advice to the Mayor on issues that concern them. This year, girls identified ending sexual harassment in the city as one of their priorities.

Further to this, the project has launched a campaign for safety of women and girls in public transport that is sensitizing drives and security personnel and training them to prevent cases of sexual harassment. This year alone, two cases have been reported thanks to this Campaign.

We have also engaged the serenazgo (district community guards) and promoted presence of women as part of this collective. Last year, there were only 17 women and currently there are 300. We have set up the serenazgo training center (CEMFOCAS[1]) where male and female “serenos are capacitated through a curriculum that has incorporated issues of violence against women and citizen security.

The initiative has been so successful that “serenos have come together and formed a music band, “Sabor Sereno (“sereno flavour) to come closer to citizens and raise awareness of violence against women during their performance and the events they participate in. The training has supported the serenazgo in referral of cases of violence against women to the pertinent institutions and in access to justice for women survivors by helping them with the reports and the documentation of evidence. Recently, we have promoted the “serenazgo without borders, aimed to facilitate coordination across districts within the city of Lima.

As part of the project, the municipality has also promoted provision of holistic and integral services for women survivors through the establishment of “Warmi Wasi, the kechua name for “Women's house. The Warmi Wasi offer holistic services that include legal, social and psychological support to women but, more importantly, they send women the message that they are not alone. The issue we face now is how to broaden these services, as we have been receiving requests from women from other municipalities of the country, who come to the Warmi Wasi to seek the services that are not available in their districts.

In coordination with the women's organization Flora Tristan, in Lima Cercado we have organized a women's torch-march. Women walked across the areas they considered unsafe, illuminating the spaces with torches as a way to liberate these spaces and gain symbolic ownership on them.

How is the project engaging men in the efforts to prevent and put an end violence against women?

Through the Assembly of Mayors, we have established dialogue with the Mayors of the 43 districts of the city of Lima (40 of which are male) to sensitize them on the fact that investing in violence against women and in plans and programmes that address this issue is a smart investment. This includes promoting that by end of 2014 all districts have at least a center of services for female survivors of violence. This has been not only a technical but also a political dialogue that seeks to encourage district governments to address social issues including issues affecting women, and get them to move away from an approach that limits them to infrastructure issues.

Looking forward, what would be the main feature of a city free of violence for women and girls?

For me, a violence-free city would be one where women feel free to walk at any time, with no concern other than having to wrap themselves up if it is cold. As my colleague Raquel Cuentas from the Department of Social Development of the Municipality has said, a city without violence is one where women are fully informed and know where to turn if they need support, a city where they do not feel alone but empowered through information and knowledge.

Finally, as our Mayor Susana Villaran states, “a city safe for women and girls is a city safe for everyone. This would be, with no doubt, the best indicator.

Related News
27/05/2020
On the front lines of COVID-19, women’s organizations provide vital services as first responders as violence against women spikes
15/05/2018
Advocating for services and legislation to protect survivors of violence in Ecuador
03/04/2017
UN Women and the Government of Mexico City launch the campaign #NoEsDeHombres to tackle sexual harassment in public transport
09/01/2017
Empowering refugee women and girls
04/01/2017
In a community in Myanmar, a role model changes attitudes and actions
END_OF_DOCUMENT_TOKEN_TO_BE_REPLACED