Exploited domestic workers in Cameroon organize themselves to defend their rights 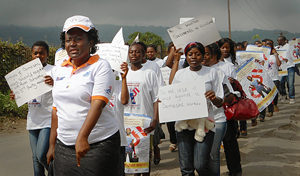 A walk to raise public awareness and widen advocacy efforts for the specific problems linked to domestic employment,organized in Buéa in the Southwest and simultaneously in other regions of Cameroon. Photo credit : Horizons femmes

Abused and exploited by her employers right from the beginning of her work-life, 50-year-old Félicité Mbida, a domestic worker for more than twenty years, fights to promote the rights of workers in Cameroon as part of the National Association Supporting Domestic Workers (RENATRAD in French).

As is the case for a number of young girls from Cameroon, Félicité started working as a domestic worker with the hope that she would do this type of work only for a short time. But with lack of other options, she was compelled to continue this work in order to provide for her two children.

“I worked with seven different families over a period of ten years due to irregular and poor working conditions and pay, she confided.

When she started working in 1996, Félicité was often subjected to sexual violence perpetrated by her employers as well as psychological pressure. She worked without a contract or social security and had no clearly defined working hours. Exhausted and fed up with such abuse, in 2004 she decided to set up an association for domestic workers in order to promote support and solidarity amongst professionals in this field.

The Association for Housewives and Cooperating Partners of Yaoundé (AMCY in French) was born and rapidly grew to include 50 members in its fold. Encouraged by its success, the initiative was integrated into RENATRAD, a body bringing together 65 associations with an average of 20 to 50 members.

Supported by the Fund for Gender Equality, RENATRAD organizes training sessions on labour legislation, the drafting of work contracts, as well as professional ethics. With this training, domestic workers have been able to affirm their social status and better defend their rights.

“We have received lots of training on our rights, salaries, contracts, and, above all, on social security; this is because many of us will soon retire, stressed Félicité, adding that she now knows the national minimum wage for Cameroon, namely 28 216 CFA francs - the equivalent of US $55 per month. She has therefore been able to negotiate her work contract with her employers, modify her working hours and benefit from social security through joining the National Social Security Service (CNPS in French).

“The programme has really changed a lot of things for us and domestic work is no longer what it was two years ago, says Félicité.

The large-scale mobilization of these women can be explained notably by their status in Cameroonian society. It is estimated that domestic workers represent 3 per cent of all workers in Cameroon of which 80 per cent are women.

“Today, we can also say that we are workers just like anyone else; what we say is taken a little more seriously now; and the number of cases of violence and abuse at work have fallen, she confirmed.

A die-hard activist, in 2011 Félicité was elected President of RENATRAD. Amongst her accomplishments is her contribution to the implementation of a national network on domestic employment regulated by the Programme's Technical Monitoring Committee (CTS in French), as well as the preparation of draft legislation on domestic employment that is now with the government.

As a result of such advocacy efforts, Félicité hopes Cameroon will soon ratify the Convention 189 (Decent work for Domestic Workers) of the International Labour Organization (ILO).