Planting the seeds of healing: moving from words to actions to restore the rights of female survivors in Colombia 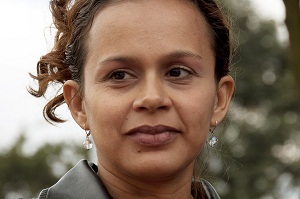 Mayerlis Angarita, a survivor of the armed conflict in Colombia, heads the Narrating for Living Foundation. The organization is supported in part by UN Women and gathers 840 women survivors from the Montes de Maria area in northern Colombia. Photo credit: UN Women / Soraya Hoyos

In her face and her tone, Mayerlis Angarita projects that infectious joy that is typical of the inhabitants of the savannahs adjoining the Caribbean Sea in Colombia, but her voice cracks as she recalls the tough times that her community, her family and she herself had to endure.

“It is a struggle that enables us to grow as women and society at the local level, because that is where you gain ground, where you build the foundation of society, declares Mayerlis, a survivor of the armed conflict in Colombia. The conflict began in the late ‘40s between guerrilla groups and traditional political parties, but that was exacerbated by the rise of drug trafficking and the emergence of paramilitary groups in the latter part of the twentieth century.

While she was still a child, Mayerlis suffered the loss of her mother, a peasant leader in the Department of Córdoba. This situation forced her father to flee in the midst of threats and harassment to seek a more peaceful, although uncertain, future for his children.

Today the power of words, of story-telling and the recovery of collective memory as a healing mechanism for the ravages induced by armed conflict, have been the main tools that this leader of the Narrating for Living Foundation (Fundación Narrar para Vivir) has founded for healing her wounds.

With an innate sense of leadership forged by the scars of war in her life, as an adolescent Mayerlis became part of community and regional efforts to ensure the vindication of human rights. She came to understand the importance of sharing memories, however painful, so that life may go on.

Working together with other female leaders in the region, Mayerlis set about the task of planting a field of corn, a cultivated field that became a permanent forum for dialogue, making it possible for these women to tell their life stories, and to describe the difficulties they had to overcome as female survivors of armed conflict, as displaced individuals in many cases, as female heads of households, as widows or orphans.

Dialogue and the sharing of experiences became a healing experience in which the words and advice of some women became a highly effective tool for the reconstruction of a life project for the other women, in which the awareness of human rights, leadership or empowerment were the path for recovering their faith in themselves and in the exercise of community development.

These workshops in 2004 culminated in the Narrating for Living Foundation, an organization that preserves the historical memory of female survivors of conflict. In 2007, the Narrating for Living Foundation initiated a joint undertaking with UNDP and UN Women (at that time UNIFEM), through the participation of several of its members, including Mayerlis, in a short course on Capacity-Building and Empowerment for Women.

“Before becoming acquainted with UN Women, I was certainly evolving in terms of my capacity for leadership, Mayerlis clarifies, “but I believe that while women always possess that spark of empowerment, without encouragement or support, we won't be in a position to achieve the goals that we set for ourselves.

“In that sense, I can say that for myself and the foundation the joint work carried out with UN Women has been pivotal, because after taking up a leadership role I evolved into an empowered leader, confident of my rights, and well-informed regarding how I can best assert these rights for myself, for my community and for other women.

UN Women, through the programme entitled Truth, Justice and Reparation for Female Victims of Armed Conflict in Colombia undertook a project that provided support for organizational strengthening. It has also developed forums for these women to inform Colombian civil society about their realities, their initiatives and ideas, many of which were included in the Victims and Land Restitution Law that was passed by the Colombian Congress in 2011 and whose implementation began in January 2012.

Currently, the Narrating for Living Foundation brings together 840 female survivors from the Montes de María area in northern Colombia. With Mayerlis at the helm, and the support of UN Women and other United Nations System agencies in Colombia, the organization is leading the process for the restoration of land to women who were deprived of their property over the course of the armed conflict.

Despite the fear and the constant threats against her life, including a recent attack due to her speaking out that fortunately left her unharmed, Mayerlis has a clear mission: “to gain access to the woman who is living in the most isolated village and say, you should do this because this is the route to ensure that you gain access, albeit to some minimal degree, to justice, to land.

Related News
19/10/2018
Sepur Zarco case: The Guatemalan women who rose for justice in a war-torn nation
22/10/2017
Sepur Zarco: In pursuit of truth, justice, and now reparations
13/12/2019
I am Generation Equality: Francy Jaramillo Piedrahita, human rights defender and peacebuilder
30/10/2018
Take five: “A successful peace process simply demands the active and meaningful participation of women at all levels”
03/03/2016
Landmark ruling in Guatemala a victory against sexual violence in armed conflict
END_OF_DOCUMENT_TOKEN_TO_BE_REPLACED