Take five: “A successful peace process simply demands the active and meaningful participation of women at all levels” 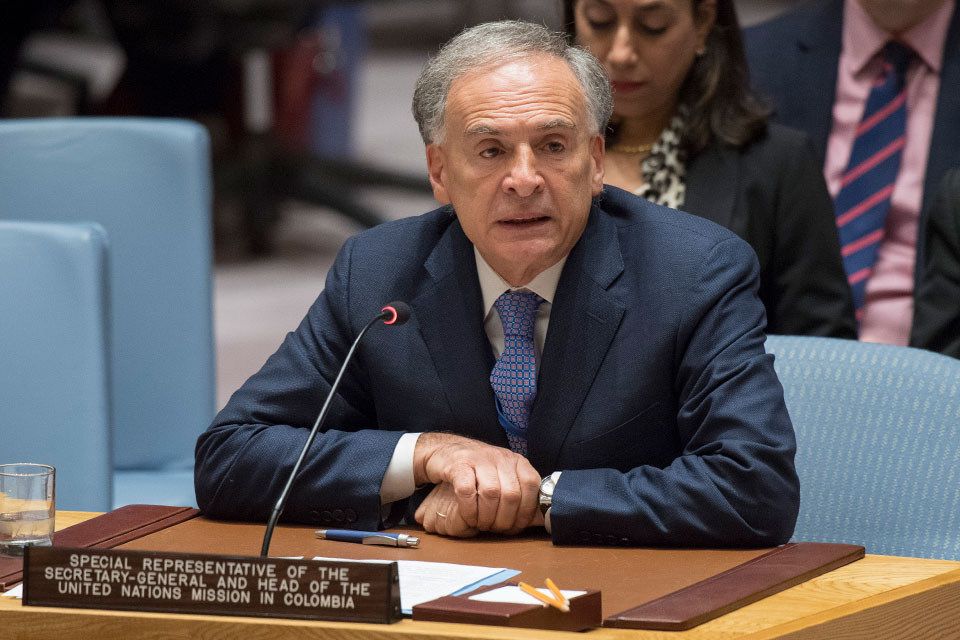 UN Women spoke with Jean Arnault, the Special Representative of the UN Secretary-General and Head of the United Nations Verification Mission in Colombia, about gender parity within the Mission and its priorities over the next year. The Verification Mission in Colombia has made impressive strides towards gender parity; 58 per cent of its professional level field staff are women and 65 per cent of field office teams are led by women. The Final Peace Agreement between the Colombian Government and the Revolutionary Armed Forces of Colombia (FARC-EP) was signed in 2016, ending more than 50 years of conflict. Contrary to most peace negotiations in history, women had a significant influence in the peace process in Colombia. The resulting peace agreement addresses core issues that impact women, such as women’s representation in decision-making bodies, access to land restitution or justice and reparations for survivors of conflict-related sexual violence.

As of 2017, of 15 UN peacekeeping missions, only 9 missions have gender units with a total of 4 senior gender advisers and 53 gender advisers and officers, andthere were only 4 per cent women among military troops in UN peace operations. Why is the percentage of women significantly higher in the Mission in Colombia than in other missions?

The Mission in Colombia started in 2106 with a large military and police observer component as our mandate focused on verifying the ceasefire and lay-down of weapons. During the first mission, we regularly met with our observer-contributing countries to encourage them to make an effort to provide more police and military women observers. However, the local teams in charge of overseeing the ceasefire and the laying down of weapons process were still largely made up of men.

So, in order to address the gender imbalance, 80 per cent of the civilian members recruited to take part in the local teams were women. It was a fair process—there was a large number of qualified women with civil affairs experience who applied. With the transition from the Mission´s first mandate to the current one—the reintegration of former combatants and the security guarantees to communities in the conflict areas—the civilian component has grown and, together with it the number of women, including the number of women in leadership positions. The success of the Mission´s Gender Parity Policy was made possible by the existence today of a large pool of women with extensive international experience in matters of peacemaking and peacebuilding.

What are some other ways that the Mission has incorporated gender equality considerations in its operations and in the implementation of the provisions of the Peace Agreement?

The Mission in Colombia is mandated to verify the implementation of two key provisions of the Peace Agreement—the reintegration of former combatants from the FARC-EP; and the provision of security guarantees for former combatants and for communities in the territories affected by the conflict.

In implementing its mandated tasks, the Mission has placed special attention on the gender provisions of the Peace Agreement related to reintegration of female former combatants and their security guarantees, as well as the security guarantees of women in the communities, who have been disproportionally affected by the conflict. Over 30 per cent of former members of FARC-EP are women; therefore, when it comes to reintegration, the Mission has made a conscious effort to understand their specific needs, capacities and interests to foster adequate institutional responses. We work closely with the Government and the Gender Commission of FARC to ensure the reintegration programmes are adapted to meet this goal.

Similarly, in terms of security guarantees, women former combatants in the process of reintegration and women who live in conflict-affected communities have specific security needs, for which we promote active dialogue at local and national levels to ensure they are involved in security and protection mechanisms. The Verification Mission has worked closely with authorities to ensure the prioritization of their needs related to prevention and protection. Women’s organizations have also been major allies in the implementation of the Mission’s mandate, as they have a significant presence and are well represented both at the capital and in the local level where the conflict played out extensively.

Having led the Special Political Mission in Colombia that, by all accounts, is prioritizing gender issues, what is your advice for other UN leaders who want to make a difference?

I have learned from experience that there is a natural convergence between peace processes and women’s movements. Peace processes are periods of change, and as such they are an opportunity for women and their organizations to promote a different and more favorable environment to promote their rights. Over the past 20 years, peace agreements have tended to evolve to become blueprints for social transformation. As such they have provided both an opportunity and a motivation for increased participation of women, and peace processes have been strengthened as a result.

But women’s participation has not only been a matter of creating alliances for the realization of progressive social agendas that peace agreements often contain. It also had an impact on the direction of peace processes. In peace negotiations and post-conflict settings, women tend to advocate more forcefully on behalf of reconciliation and the restoration of a sense of community in war-torn countries. The leadership role that women play in the innovative transitional justice mechanism in Colombia is a case in point.

What are the main concerns and challenges in gender-sensitive implementation of the Peace Agreement in Colombia and what should the UN pay close attention to in the coming years?

There is unfortunately a certain negative feature to many peace processes: they tend to focus initially on the big picture— changes to the Constitution, changes to the legislation, rearrangements at the political level, establishment of new institutions, for example. All these changes are happening in the capital, among political elites. However, in areas where the conflict has been most violent and where the victims have been most numerous—not in the capital but in the countryside, in local communities— that is where the peace process takes more time to reach.

In Colombia, FARC leaders are now part of Congress, provisions of the Peace Agreement have been enshrined in the Constitution, and new institutions have been designed to ensure truth, justice and reparation to victims, but all these developments still have one thing in common: most of them are capital-based.

The challenge now is to move the peace process out of the capital and into the areas where the conflict has been waged, and where the communities are expecting results. When it comes to the situation of women, the challenge will be to bring to bear a focus that takes fully into account their situation—those who have been victims, members of communities and women former combatants—according to their specific needs and aspirations.

How can UN Women work with the Verification Mission and other agencies to further gender equality and sustain peace in Colombia?

We are working very closely with UN Women and we are benefiting from the pre-existing presence and networks that you have with the women and women’s organizations in Colombia. The Mission has only had a presence in Colombia since 2016, and as such it can only build on the efforts of agencies such as UN Women. At the same time the Mission has now a large presence in the countryside, and we hope that while we are in the country, UN Women can expand its influence in these areas as well.

One area of work where I hope UN Women will play a key role over time is the socio-economic reintegration of women former combatants. We must not fail them in the identification of clear and long-term economic opportunities within the reintegration programmes.

Related News
17/12/2015
Joint Statement by Phumzile Mlambo-Ngcuka and Zainab Hawa Bangura on the signing on 15 December 2015 of the agreement on conflict victims between the Government of Colombia and FARC-EP
10/07/2017
Feminism in Times of War and Peace
30/11/2016
Coverage: Towards justice and gender equality to build peace
28/05/2015
Women take the reins to build peace in Colombia
06/02/2015
Women Nobel Peace laureates visit Colombia to increase awareness of sexual violence
END_OF_DOCUMENT_TOKEN_TO_BE_REPLACED