Women take the reins to build peace in Colombia

The voices of women as experts, survivors and negotiators have been included in a peace process with an unprecedented gender perspective, with the support of UN Women and other partners.

At a Women’s Gathering on 8 March 2015 in the Department of Meta, participants planted their hands painted in white on a mural as a symbol of their desire to make a mark for peace. Photo: UN Women/Mauricio Cardona

Nelly Velandia is a rural leader from Nuevo Colón, a village in central-eastern Colombia, who joined the agrarian movement at a young age. Seeing that those most affected by violence and inequality were women, she joined the National Association of Indigenous and Peasant Women of Colombia. 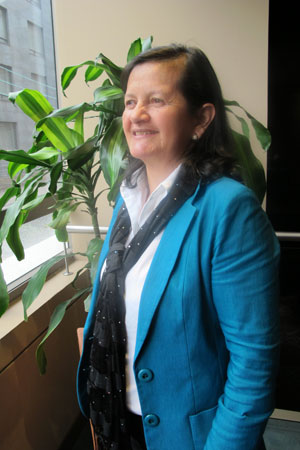 Nelly Velandia, leader of the National Association of Indigenous and Peasant Women, following a meeting of experts in gender delegates who participated in the talks in Havana Photo: UN Women/Maria Reyero

Her life has often been at risk, with constant death threats from various illegal armed groups because of her work to defend the rights of rural women. Undeterred, Ms. Velandia persisted for decades, convinced that women need to take an active part in peacebuilding: “For us, peace is defending the land, food sovereignty, and women's rights. That is what peacebuilding is about.”

She is one of 16 women who have succeeded in participating as gender experts in the historic Peace Talks taking place since October 2012 in Havana, Cuba, between the Government of Colombia and the Revolutionary Armed Forces of Colombia - People's Army (known by their Spanish acronym FARC-EP).

After more than 50 years of armed conflict and two failed peace processes, the Government led by President Juan Manuel Santos and the FARC-EP insurgent group sat down in Cuba with a common goal: to end one of the longest internal armed conflicts in the world and reach a stable, lasting and sustainable peace agreement. 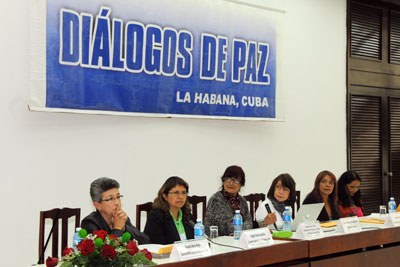 Representatives of women's organizations and networks that were part of the first delegation of gender experts at the talks in Havana - Subcommittee on Gender, present their proposals for building peace deal with Government and FARC-EP negotiators in December 2014. Photo courtesy of the Peace Talks, Havana, Cuba.

At the beginning of the negotiations, much emphasis was placed on the need for the process to be inclusive. The General Agreement that has guided the negotiations even recognizes that they “require the participation of all, without distinction.” Even then change came slowly, and it took more than two years to include women's organizations in the process. Simultaneously, as part of the peace process back in Colombia, women started speaking out, including at the regional citizen consultation forums supported by the United Nations.

One year after the peace talks had been announced however, women and their demands were still largely absent. Recognizing that this process presented an historic opportunity to raise awareness of and address the structural inequalities that prevent women from exercising their rights, women’s organizations adopted a different game plan to boost their participation. 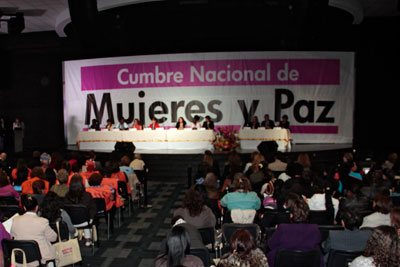 The National Summit of Women and Peace held in October 2013 was supported by UN Women. Photo: UN Women

In October 2013, they joined forces to lobby together to demand their recognition and voice in the peace process. Nearly 450 women from all over Colombia gathered in Bogotá at the National Summit of Women and Peace, supported by the UN system led by UN Women, and with support from several countries.

“As the organizations convening the Summit, we told the negotiators in Havana that we did not want peace to be made for us, but to be the peacemakers,” explained Marina Gallego, coordinator of the grass-roots organization Ruta Pacífica de las Mujeres (Women's Route to Peace).

Two weeks after the National Summit of Women and Peace, an agreement was reached at the talks on political participation, in which the parties recognized the “important role of women in conflict-prevention, conflict-resolution and peacebuilding.” Shortly thereafter, President Santos in a historic move, appointed two women with greater decision-making power on behalf of the Government at the talks.

At times, one-third of delegates in Havana have been women, still far from parity but above global averages. 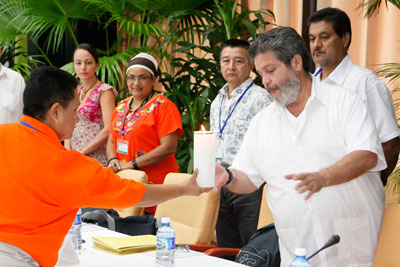 In a symbolic ceremony at the fourth survivors’ delegation to the peace talks in Havana in November 2014, Nora Elisa Vélez, a displaced woman and LGBTI survivor representative, hands over a white candle to Marcos Calarcá, of the FARC-EP negotiating team. Photo courtesy of the Peace Talks, Havana, Cuba.

Other changes followed. In August 2014, the talks opened a space for delegations of survivors of the armed conflict, with 36 women accounting for more than 60 per cent of participants. Possibly without precedent in the field of conflict resolution, the women negotiating at the table on both sides met with women affected by conflict. Their testimonies of violations of their rights, including sexual violence and displacement, illustrated the various ways in which the war has affected their lives and those of their communities.

Representatives of women's organizations and the LGBTI community also participated directly in the talks in Havana as gender experts, presenting their proposals for peace and a possible post-conflict scenario.  Ms. Velandia was among them and she took the much-anticipated opportunity to highlight the impact of the conflict on rural, indigenous and Afrodescendant women in particular. She urged negotiators to reach an agreement and include women therein.

Shortly thereafter, in September 2014, a dedicated gender Subcommittee was established at the talks with a mandate to ensure a gender perspective and women’s rights are included in all agreements.
Ms. Velandia commended UN Women's support for women’s participation as negotiators and peacebuilders: “It has acted as guarantor and has given technical support for our participation as women in the peace process. With all this technical support, I feel that I've matured politically; it has helped me develop.” 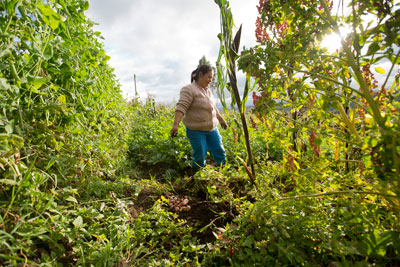 This woman shagrera – who uses ancestral forms of agricultural production – is one of many beneficiaries of a UN Women project to promote economic empowerment, which is key to building peace at local level. Photo: UN Women/Ryan Brown

In addition to UN Women’s multi-pronged support for the peace process, to help guarantee women’s rights in a future post-conflict scenario, UN Women Colombia has lent support on several fronts, from supporting the creation of laws to integrate gender equality and support women survivors, including a Victims and Land Restitution Law in 2011, with more than 25 articles on gender issues; to organizing rights training and economic empowerment initiatives for women.

During her recent visit to Colombia, at a community meeting in the Department of Antioquia UN Women Executive Director Phumzile Mlambo-Ngcuka highlighted the high-impact work of women’s groups, saying: “It is through women like you that the discourse of war has changed. The peace process is making a better country, and Colombia needs you to maintain hope.”

For more information, check out the In Focus editorial package on Women and Armed Conflict on the Beijing+20 campaign website.

Related News
06/02/2015
Women Nobel Peace laureates visit Colombia to increase awareness of sexual violence
30/10/2018
Take five: “A successful peace process simply demands the active and meaningful participation of women at all levels”
10/07/2017
Feminism in Times of War and Peace
25/07/2016
Changing the narrative on women’s role in peacebuilding in Colombia
22/07/2016
Women at the frontlines, building peace in Colombia
END_OF_DOCUMENT_TOKEN_TO_BE_REPLACED