“We will do our best in order to ensure that the world hears your voices and knows your suffering and the resistance that you have put up in this stuggle.” With these words, Iranian Nobel Peace Prize winner Shirin Ebadi, the first-ever Muslim woman to win the award, addressed a group of survivors of conflict-related sexual violence at a meeting in northern Colombia, close to Cartagena. 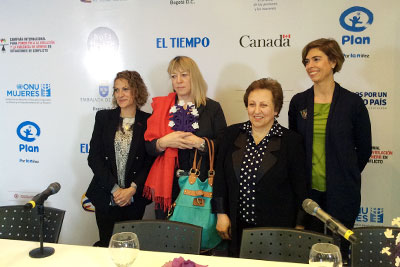 From 3-5 February, Ms. Ebadi and Jody Williams, a human rights activist from the United States who won the Nobel Peace Prize in 1997, visited Colombia to meet with women survivors of sexual violence in a conflict which has lasted more than 50 years. The visit was organized by Colombian journalist Jineth Bedoya and the Colombian newspaper El Tiempo, with support from UN Women, as well as UNDP, the Spanish Cooperation Agency (AECID), Oxfam, Colombia’s Integrated Support Unit for Victims; and the Government of the Department of Bolívar.

The principal aim was to raise the visibility of sexual and gender-based violence and demand that increased attention to be given to these crimes throughout the historic peace process now underway between the Government of Colombia and the Revolutionary Armed Forces of Colombia—People's Army (FARC-EP).

The Nobel women, accompanied by journalist Jineth Bedoya, UN Women Representative Belén Sanz, as well as women survivors and other supporters, met with Colombian President Juan Manuel Santos to discuss the importance of addressing sexual and gender-based violence within the current peace talks in Havana. At the end of the meeting, President Santos agreed that the peace process takes in consideration “the victims of sexual violence, women as the solution of this conflict, their voices, their hopes.”

As part of their trip to Colombia, the Nobel women, along with 100 national and international women who had also experienced sexual violence, visited the “City of Women” project in a village near the city of Cartagena. Women displaced by conflict there are survivors of violence who dream of living in peace. They have lost husbands, sons and loved ones. This meeting was also attended by women from other regions of the country, who shared their experiences and coping strategies.

“Despite everything, it did not detract me from what I have to do because I have a calling, I carry the flame and I am the light of my community,” said another women, who travelled from the Pacific coast, highlighting the power of women to mobilize themselves as peacebuilders.

Ms. Bedoya, a survivor of sexual violence herself, began the three-day visit by emphasizing the courage of these women is “much stronger than all the guns”.

The Nobel Peace laureates and UN Women Representative in Colombia listened carefully to women’s stories and their demands for justice, and pledged to represent them before national institutions and the international community.

The three-day visit also included a forum in Cartagena, where survivors of sexual violence voiced their support for the increasing consideration of sexual violence as a crime, and the responsibility of the State and civil society to jointly eradicate such violence.

Ms. Ebadi stressed the need to address the role of gender in impunity: “in a patriarchal society, men easily escape liability”.

Female survivors of sexual violence who took part in the forum included Hania Moheeb, an Egyptian survivor of abuse in Cairo’s Tahrir Square and Mayerlis Angarita, activist and founder of the Colombian organization Narrar para Vivir (“Telling is living”).

“We are living, walking, breathing mourners of this tragedy, and we live with our pain; however, we will never give in to impunity,” said Ms. Angarita.

UN Women Representative in Colombia, Belén Sanz, highlighted the fundamental progress in recognizing sexual violence as a crime for both peacebuilding and for the nation’s development. She concluded: “the Colombian peace process could be exemplary of how to effectively include women’s voices in peace processes.”

Related News
17/12/2015
Joint Statement by Phumzile Mlambo-Ngcuka and Zainab Hawa Bangura on the signing on 15 December 2015 of the agreement on conflict victims between the Government of Colombia and FARC-EP
28/05/2015
Women take the reins to build peace in Colombia
30/10/2018
Take five: “A successful peace process simply demands the active and meaningful participation of women at all levels”
10/07/2017
Feminism in Times of War and Peace
25/07/2016
Changing the narrative on women’s role in peacebuilding in Colombia
END_OF_DOCUMENT_TOKEN_TO_BE_REPLACED