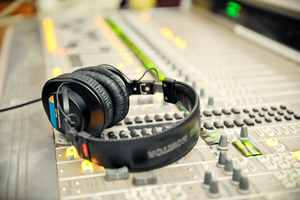 Radio broadcasters and other journalists are in the unique position to use media as an instrument for peace. Photo credit: UN Women/ Catianne Tijerina

Darfur has known conflict and tragedy for years. Sounds of gunfire and heavy shelling fill the air, with both sides killing and displacing many thousands of women and children. But for Intisar Ginded, a mother of one, the pursuit of peace in Darfur is an ideal worth highlighting.

“As a young girl, I had a burning ambition to work as a broadcaster. I knew it was the only profession that would allow me to directly talk to my community, said Intisar. “It would allow me to exchange information and ideas. Nothing was going to stop me from realizing my dream.

For Intisar, whose name means “triumph in Arabic, working as a broadcaster helps her to shed light on the issues that affect Darfurians, especially women and children, who bear the brunt of the perennial conflicts.

Intisar graduated from the University of Koran in Khartoum with a Bachelor's Degree in Media in 2004. She also holds a diploma in media with a specialization in TV and Radio programming and is currently pursuing a Master's degree at the National Ribat University.

Armed with her degrees and a passion to find lasting solutions for her community, Intisar joined the state-owned Elfasher Radio and Television Station. The dedicated broadcast journalist pioneered a radio and TV programme called Women and Society, which runs twice daily.

“Women are always isolated from the national development agenda, yet they are the majority of the population and contribute immensely to our economy. When war breaks out, they are the most affected, often fleeing to far-flung areas in search of peace and stability. I initiated this programme to cater to their needs, said Intisar. “We spread messages of peace and hope in the refugee camps.

Intisar was among a group of 20 journalists drawn from the print, broadcast and electronic media attended a two-day strategic communications training course in Khartoum on 10 and 11 October, 2012. Participants were trained to incorporate gender perspectives in their work and internalize their role as agents of peace. They were urged to write stories that consider women not only as those primarily affected by conflicts, but as crucial players in peace processes.

“Media are important players in the field of development and cannot be ignored. Media can be important actors in the promotion of gender equality, UN Women Sudan Country Director Jebbeh Forster told participants.

UN Women's office in Sudan has been supporting the participation of women in the Darfur peace process. They have also worked with media to advance women's inclusion as peace negotiators and to promote peaceful co-existence.

For Intisar, media are positive instruments for change and working for women is a calling. “Women are not only half of the population just in numbers. Their involvement in development issues also counts. We are not just figures!'' said Intisar.

“During conflict, we share messages of peace and hope over mayhem and fear, she added, proud of what her radio programme has accomplished. It provides women with factual information on food security and on the stability of Darfur.

Related News
28/06/2021
Winners of the comic and cartoon competition, “Generation Equality: Picture It!”
10/03/2021
This is what leadership looks like: Meet Mzuri Issa, breaking down social barriers to women’s leadership in Tanzania, using the media
07/11/2019
From Sudan to the Security Council: Sudanese women lead drive for change
29/10/2019
Statement by Alaa Salah at the UN Security Council Open Debate on Women, Peace and Security
03/05/2019
From where I stand: “Every journalist must be aware of the power they have to help change things”
END_OF_DOCUMENT_TOKEN_TO_BE_REPLACED