I too am a woman: Uruguayan women with disabilities speak out for their rights

Lourdes Figueroa is a woman like any other: she has plans, hopes and aspirations. At 36, she likes to live life to the fullest, but like all of us, sometimes finds herself both laughing and crying at times. Lourdes also has a physical disability and, as is the case with other women in this situation, finds herself marginalized by society, often to the point of complete exclusion. But Lourdes has risen to the challenge, and is now a grassroots activist with a housing co-operative for people with disabilities. 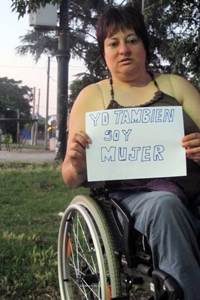 Lourdes Figueroa, 36, wants people to see beyond her wheelchair and accept her for the person that she is. Photo credit: UN Women/Cecilia Lucas

“There are so many of us, so if we all join forces, we have the power to change our situation, says Lourdes, incentivizing many other women with disabilities who have participated in a series of workshops, organized by UN Women, and held in Montevideo.

According to Lourdes, these meetings involving approximately a hundred women with disabilities, auditory, mental, visual or physical- “were a milestone for those involved to share their thoughts on the rights we have as women, and all that is due to us.

It is thanks to these workshops that participants have begun to say in no uncertain terms: We too are women! Furthermore they have become keenly aware of the importance of promoting, the right to lead lives that are free of violence and enjoying their sexual and reproductive rights.

Statistical information relating to the disabled population in Uruguay is hard to come by. However, the current estimate of the number of disabled people living in urban centres is approximately 210,400, of which more than half are women. Despite the limited data at hand, there is nonetheless sufficient evidence of the exclusion which people with disabilities are facing.

In light of these facts, in 2011 UN Women developed a number of initiatives to improve the quality of life of women with disabilities. Such initiatives include technical support for the inclusion of a gender, with particular attention given to the situation of those women with disabilities, within the national care system (currently under development) to the development of research that demonstrates the need to overcome the barriers that these women were facing when attempting to gain access to health services, in particular those services relating sexual and reproductive health.

Some of these studies have led to specific public commitments, such as a protocol by the Ministry of Health on how to address sexual and reproductive health of people with disabilities.

UN Women also encouraged the creation of the first network of women with disabilities with a view to empowerment their situation in the workplace.

Lourdes believes that all of this work will have beneficial long-term effects: “These are tools for paving the way for future generations so that they too can reap the benefits of our achievements that we worked so hard for.

[i]Data collated from the National Survey of People with Disabilities 2004 of the National Honorary Committee for the Disabled and the National Institute of Statistics ENHA.
Related News
03/08/2020
Shining a Spotlight on Mexico’s pandemic heroines
01/04/2020
From where I stand: “I am fearful for smaller countries that have limited resources during COVID-19”
16/07/2019
From where I stand: “There are things for which life doesn’t prepare you”
28/02/2017
In Uruguay, care law catalyzes change, ushering services and breaking stereotypes
13/06/2013
Domestic workers in the Southern Cone push for rights with ILO Convention on their side
END_OF_DOCUMENT_TOKEN_TO_BE_REPLACED