In Northern Tajikistan, in the village of Qal'achai Mazor in Isfara district, the story of Savrukhon Kholmatova is all too common. A mother of four children, she is also the primary care provider for her three disabled nieces and nephew. For Savrukhon, life is a daily struggle to provide for her children and her orphaned dependents, who lost their mother at a young age to disease, and a father in a rail yard accident. Adding to the problems was the absence of the birth certificates of the nieces and nephews, which made claiming disability benefits impossible. 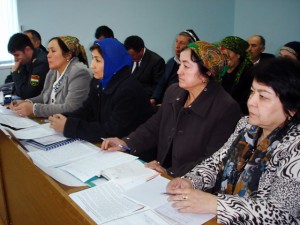 Women's Watch Groups, such as this one in Sughd Oblast, Tajikistan, bring together women leaders in rural communities to advocate for their needs. (Photo: UN Women/Mavjuda Nazirova.)

A new programme on improving access to social protection in rural areas of Kulkent, Navgilem, Shahrak, and Chorkuh jamoats(local councils) is starting a change. Supported by UN Women and bringing together rural women, the initiative works on the establishment of Women's Watch Groups, which monitor the situation of the most vulnerable households and identify ways to improve access to social protection. During the first phase of the programme, the Watch Groups visited more than 499 households, to speak to different families and do needs assessment studies.

When she joined the Women's Watch Group, Bashorat Rahimova liked the idea of being part of an association that brought together women leaders in the rural community to advocate for their needs. Having previously been active in local affairs, she knew well the harsh circumstances that many families in her rural district lived in. Bashorat and the Women's Watch Group decided to support Savrukhon Kholmatova's family to find the birth records of the disabled children, which would enable proper documentation and facilitate social protection benefits.

Through great persistence, the birth records of the children were found in the archives of the district's civic registration department and have since been reissued, free of cost. With the lack of public transport in rural areas' being a big deterrent to mobility and access to medical services, the Watch Group lobbied with district authorities to begin conducting medical examinations in residences, for authorization of disability benefits and pensions. The efforts paid off, and Savrukhon Kholmatova's nieces and nephews were also issued with medical certificates confirming their disability status and right to benefits. The Watch Group also mobilized the local community to support the household of nine persons financially, to meet some of their basic needs.

With many such changes underway in rural Tajikistan, the Women's Watch Groups are slowly being recognized in several districts as important platforms for women's leadership, with potential to have a very concrete impact on communities. In total, seven Watch Groups have been formed in Tajikistan with the support of UN Women's Programme on Gender and Democratic Governance. By working with the local governments who provide services, today the Women's Watch Groups are playing a critical role in helping service providers understand the needs of rural areas and how the design of social protection services needs to be reformed to meet these needs better.

Related News
09/07/2012
Better services opening new doors for women in Tajikistan
11/04/2012
One-stop-shop service delivery in Tajikistan
23/06/2020
Gulbahor Majidova: Overcoming loss with a determination to help others in Tajikistan
08/06/2020
Tajik businesses run by women living with HIV supply key protective gear for COVID-19 response
30/01/2020
From where I stand: “Expanding economic opportunities of women is key to ensure safety and prosperity”
END_OF_DOCUMENT_TOKEN_TO_BE_REPLACED