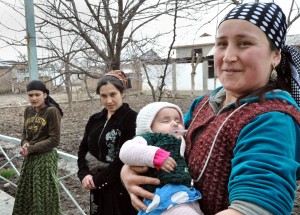 Makhfirat Dadaboeva was forced to drop out of university when her first of three children was born, but is now determined to finish her education and get a job with the support of the District Task Force in Hissar District in central Tajikistan. Photo: UN Women /Ana Lukatela

Makhfirat Dadaboeva, a young mother, cradles the youngest of her three children as she waits in front of the Municipal office in Hissar District in central Tajikistan. Forced to drop out of university when her first child was born a few years back, she is now determined to change her future by finishing her education and getting a job. Bolstering her confidence is the local District Task Force, a legal aid centre supported by UN Women, which provides much needed services to underserved community members, many of them women.

The District Task Force provides legal aid, counseling on rights, referrals and assistance with official paperwork for those with low levels of literacy. They also provide legal representation for women, when needed, for court cases.

The task forces, initiated in six districts over the past year by the Government of Tajikistan with UN Women's support, have become a key resource in helping vulnerable citizens, particularly rural women who now comprise of more than 70 per cent of their clientele. A testament to their success came in 2011, when the government decided to expand the service and fully fund it to create 72 District Task Forces across the country. And today more and more people are using the services of the task forces.

In 2011 in Sugdh province alone, the 18 task forces there serviced over 5000 clients, covering a range of issues from social protection to land registration. Each helps up to ten clients per day, mostly vulnerable and lower income women. Women hear about the services through the radio, newspaper and posters at the local colleges. They come with complex problems related to citizenship, civil and land registration or access to social protection, such as disability pensions. Records show that over 70 per cent of them go home happy with successful results.

Working three days a week, and an extra day through a mobile arrangement, the District Task Forces cover different rural communities through a well publicized schedule. During mobile consultations they also conduct informational trainings on issues such as financial resources and family budgeting. In Hissar district where the young mother Makhfirat Dadaboeva lives, the local Hukumat (Municipality) have come to recognize the results and importance of the initiatives. In this district they play a critical role in assisting people to access social protection services, including support for their children in the ace of a 40 per cent malnutrition rate.

In recent months, the municipal authorities decided to use their own budget to expand the services by setting up two additional task forces at the community level. UN Women provided the operations with computers, to help better track and evaluate the population's issues and concerns through a database, and to ensure their follow up. The analysis of the cases from the database is being used to identify service gaps and address them with the provincial government.

Results are already evident. Through joint advocacy efforts the task forces and the local Women's Watch Groups recently managed to facilitate a formal agreement that waives late fines for vulnerable clients in certain service areas, such as obtaining a passport. In previous years, late fees were one of the biggest obstacles to accessing a passport, which is critical in turn for many low income women to access other services. But today their future looks a little better, and they are able to achieve much more.