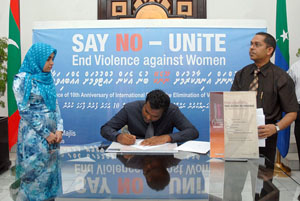 The United Nations has welcomed the passage of a bill to address domestic violence in the Maldives. The successful vote is a testament to the passion, optimism and dedication of those in the political parties, ministries, and non-government and community organizations who have worked to reach this goal.

UN Women, which provided detailed inputs on the draft bill with other UN agencies, welcomed the passage of the bill. “This is a remarkable gain for the women of Maldives, said Anne F. Stenhammer, the Regional Programme Director of UN Women in South Asia. “We hope to work together with the government and other UN agencies to raise awareness of the bill and help in its implementation.

As noted by the UN Resident Coordinator, Mr. Andrew Cox, the enactment of the Domestic Violence Bill was urgently needed in the Maldives, which suffers from a high rate of gender-related violence, particularly against women and girls. “The passing of the bill is a good example of how dialogue among different groups and cross-party cooperation can yield beneficial results to the country, he said.

In a national survey on “Women's Health and Life Experiences, conducted with the support of UNFPA, UNICEF and the WHO, one in every three Maldivian women aged between 15 and 49 reported experiencing some form of physical or sexual violence at least once. Information from Family Protection Units confirm such a prevalence, and indicate that 87 per cent of perpetrators are known to the survivors.

The passing of the bill is in line with Maldives' international obligations under the Convention on the Elimination of Discrimination Against Women (CEDAW). The last CEDAW Report on the Maldives underscored the urgent need to address gender-based violence in the country, to put in place the appropriate legislative frameworks for prevention and protection, and to build stronger protective services for women and children.

UN Women supports the implementation of the CEDAW Convention in the Maldives, with a particular focus on trainings and workshops about its use for government and non-governmental agencies; participants have learned how to raise awareness of the rights and the spirit of the convention among women and girls across the country. UN Women is also supporting the national government as it compiles a report on milestones achieved in relation to CEDAW, among other activities.

UN Women has also conducted a number of interventions aimed at addressing violence against women in the Maldives. In 2012, the Thinakun Ekeh Campaign promoted awareness on gender-based violence. A 500 km run in Male City during activities for the annual international 16 Days of Activism against Gender Violence initiative in 2011 also helped further the cause.

In 2009 all 77 Members of the Maldives Parliament committed to addressing gender-based violence by signing on to Say NO-UNiTE, a global advocacy initiative under the UN Secretary-General's UNiTE to End Violence against Women campaign. Concurrently, the country's main legislative body adopted a resolution on eliminating violence against women. UN Women also supports the implementation of the United Nations Development Assistance Framework 2011 -2015, specifically addressing Outcome 15, which focuses on gender equality and women's empowerment.