Allies against violence: a fatherhood training to end discrimination against women in Turkey 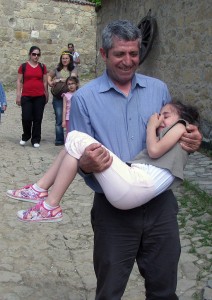 Unal Kurtal, one of the fathers participating at ACEV's training, with his youngest daughter during a trip organized by the participants of his father's support group in Turkey in 2012. Photo: Mother Child Foundation (ACEV).

In a primary school in Istanbul, a group of men sit on small wooden chairs, holding a lively discussion. Some have their hands raised, waiting for their turn to speak; others look deep in thought as they take down notes.

This is not the first time that the men have occupied the room, and yet their presence continues to raise eyebrows. “It is really an experience to see 15 men in a room talking about their wives and children, and not football, says Izzet Sengel, a training specialist at the Mother Child Foundation (ACEV), with a smile.

ACEV is a Turkey-based organization that has seen and pursued a promise of positive change in men through their roles as fathers. Its ‘fatherhood programme', in partnership with the UN Trust Fund to End Violence against Women, currently supports a group of 210 activists as they conduct discussion-based men-only assemblies in schools across six provinces. It aims to prevent domestic violence by involving men as allies in the issue, and promoting gender sensitivity and equity among fathers. Through a three month curriculum of weekly meetings, members share their experiences as fathers and discuss often unfamiliar topics, from how to improve listening skills and manage anger, to the way that violence is often rooted in gender stereotypes.

The approach is an innovative response to a problem that has caused unprecedented damage in wider society.

In Turkey nearly 45 per cent of married women have been subject to violence by their partners - whether physical (39 per cent), sexual (15 per cent) and/or emotional (44 per cent) - according to a 2009 report from the Ministry of Family and Social Affairs, 2009. According to the women surveyed, causes range from disputes related to husbands' families or to children; economic problems; or male anger borne of jealousy. On a scale of taboo issues in Turkey, this is among the highest. And yet violence against women and girls is a violation of human rights, and carries significant costs to the health, and social and economic well-being of Turkish society as a whole.

It seems ambitious to alter life-long behaviours and entrenched social norms in just thirteen weeks, as Sengel and other ACEV members are aware. And yet their work has shown results. By engaging trainers such as teachers and social workers, who are already respected in the community, they have made a valuable difference to the mindsets of men in the communities they work with.

“When I see the change, I think every father should take this course, says Unal Kartal, a forty-nine year old father of three, and a group member in Istanbul. “I was always proud to be a good father, however, now I realize I was too protective. I used to easily get angry before. I learned to control my anger during this course.

Through the discussions, trainers aim to question traditional parenting schemes and the perception of men's roles within families. However they also engage the whole family. Two sessions offer wives an insight into the topics covered during the programme, and a booklet on institutions, laws, women's rights national action plans and information on referral and support services for women and girls subject to violence.

At the conclusion of each programme - a ceremony. Organised by the groups at a provincial level, each is attended by children and wives, and is a chance for graduating fathers - 1951 of them since the programme started in September 2011 - to have their progress and achievements recognised by their peers.

And the change does radiate. As Unal's wife, Ozge, explains: “After my husband started the courses I learned that emotional violence could harm as much as physical violence. It made me pay attention to how I behaved with my daughters. I decided to join the struggle against violence against women and girls.

In a positive step, Turkey's Ministries of National Education, Family and Social Affairs recently began to support the programme, and have requested for it to be upscaled. The Kartal family approves. “This certificate should be necessary before getting married, says Unal, with a smile.

Related News
09/12/2015
Fathers in Turkey foster violence-free families and gender equality
20/03/2021
Statement by UN Women on Turkey’s withdrawal from the Istanbul Convention
16/11/2020
Hand over the mic to: Aras Kocaoğlan, Turkey
27/05/2020
On the front lines of COVID-19, women’s organizations provide vital services as first responders as violence against women spikes
18/05/2020
Take five: COVID-19 will pass, but will anything change in the protection system?
END_OF_DOCUMENT_TOKEN_TO_BE_REPLACED