A key milestone toward gender equality is passed in Albania, bringing hope to many

In the Southeastern nation of Albania, girls in the villages often tell the same story. For Albana, and other ten-year old girls like her, the first day of school is exciting. She runs down the street in her village of Kukes to make it on time, afraid she will be late. But her school is not just around the corner, it across the border in Kosovo and she has to walk nearly an hour to get there.

There is no bus and no companion for her to walk with. The one friend she did have who would accompany her on the long trek, dropped out of school as her parents said the trip was too dangerous for girls. So, now Albana is alone and afraid she won't be able to make the walk when the snow comes and fearful that her parents too may stop her education. She fiercely hopes for a change.

To bring that change to young girls like Albana, Albania took a key step towards gender equality in July. The national Council of Ministers approved a gender mainstreaming budget directive - an important milestone in the road toward gender equality in the country.

Gender mainstreaming is a globally accepted strategy to promote gender equality. It ensures gender perspectives and the goal of gender equality are central to all government planning such as budget allocations, policy development, research, advocacy, legislation, and monitoring of a country's programmes and projects. 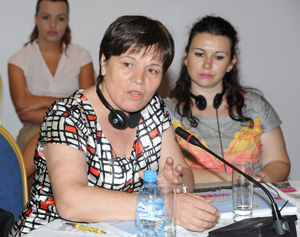 One participant speaks up in a discussion on financing for gender equality held in Tirana, Albania in July 2012 just as the country's National Council of Ministers approved a gender mainstreaming budget plan. Photo credit: UN Women

The decision of Albania's Council of Ministers on gender-mainstreaming the budget is expected to lead to more investment in special programmes in developmental sectors such as agriculture, health, education, and transport.

The plan makes it compulsory for ministries to at least include one gender objective in the budgetary programme. In order for the gender objective to be marked, a detailed gender analysis and the definition of suitable gender indicators are needed to set budgetary lines to give strategic directions and aims of gender equality.

This is one of the many steps Albania has taken to advancing gender equality. Over the last few years the country has built a good legal and policy basis for achieving gender equality. The National Strategy on Gender Equality, Reduction of Gender Based Violence and of Domestic Violence and its Action Plan for 2011-2015 was approved in June 2011. The strategy is a cross-sector policy document seeking to ensure gender mainstreaming and setting the objectives to be implemented by the line ministries and the other institutions.

UN Women has provided technical expertise, and supported conferences on best practices and study tours for senior officials to strengthen local capacities to use gender budgeting in practice, since 2008.

Now that the ministries have to take into account the needs of girls and boys, women and men while planning their budgets for education, transport, health and agriculture, Albana's dream of becoming a nurse and being able to help others could just become a reality.

Related News
15/11/2021
Empowering students in Albanian schools through self-defense training
21/07/2020
Gender assessments in Europe and Central Asia reveal pandemic’s devastating impact on women
07/03/2018
One room, her only home
26/10/2016
In Albania, football and a mobile app get men to commit to gender equality
30/06/2016
“Gender mainstreaming is no longer an option, it is an imperative” — Lakshmi Puri
END_OF_DOCUMENT_TOKEN_TO_BE_REPLACED