Building the leaders of tomorrow: preparing young women in Latin America and the Caribbean

“For us, taking part in the ‘Young Women, Leadership and Governance’ Regional Forum is key. Being here means sharing our experiences of work and our agendas, which are no different from those of other women throughout the world,” says Tania Pariona, a 27-year-old indigenous activist from Peru and member of the Continental Network of Indigenous Women of the Americas. “We may differ on certain details, but there are points on which we all agree, for example condemnation and rejection of all forms of violence against women.”

Tania is one of 80 young women leaders, who attended a regional meeting in Panama from 23 to 25 November 2012. Organized by UN Women, UNDP and UNFPA, the meeting brought together young leaders from 25 countries of Latin America and the Caribbean and provided a space for discussion and exchange of ideas, where the participants could make their voices heard among their peers and other organizations. In order to share experiences beyond their region, young women from Cameroon, Tanzania, Cambodia and the Maldives also took part.

The participants brought with them their experiences in working on issues such as the environment, culture, health and youth entrepreneurship in their countries. Some are full time gender advocates, while others are students, lawyers, artists, journalists, parliamentarians or entrepreneurs. 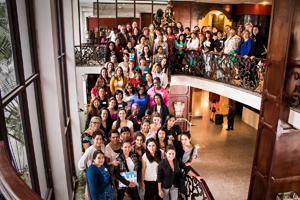 In the picture are some of the 80 young women leaders, from 25 countries of Latin America and the Caribbean, who attended a regional forum in Panama, organized by UN Women, UNDP and UNFPA. Photo: Cronos Films

For 25-year-old Jennifer Delgado, from Panama, youth leaders are becoming more and more influential in building the future of their communities and their countries. “Without the concerns and fears of young women, in other words, without our agenda, it will be impossible to make changes to achieve an equal society, one which respects human rights,” says Jennifer, who runs the Panamanian Observatory against Gender Violence, an institution that depends on the Ombudsman’s office and which undertakes research, evaluates programmes and initiatives and prepares recommendations on the evolution of violence in all its dimensions.

“They are the leaders of today and, especially, of tomorrow. They can count on our support and our commitment to ensure their involvement in processes that will be key in creating their own future – processes like Cairo+20, Beijing+20, the post-2015 Development Agenda, and the Commission on the Status of Women,” said Moni Pizani, Director of UN Women for Latin America and the Caribbean, during her inauguration of the forum. “For UN Women, it is vital to work towards the full and equal participation of young women in Latin American and Caribbean countries.”

Recognizing that women have rights and fundamental roles in national development, the delegates issued statements on the questions they considered key for the future they want, such as sexual and reproductive rights, participation, education, violence, economic empowerment, information and communications technologies, art and culture as well as sustainable development.

The forum concluded with the participants calling on leaders to: guarantee young women a life free from violence, create activities for economic empowerment, reduce the digital divide and create spaces for their involvement. The young women presented their Final Declaration and submitted it to parliamentarians from across Latin America, who had gathered in Panama for a meeting organized by UN Women, UNFPA, UNDP, PARLATINO and the Inter-American Parliamentary Group.