Young Uruguayan women aim to boost their role in politics

“Being a women and being in politics is unusual,” says Lorena Teijeira, 30, a young member of the National Party. “The time dedicated to the party, time that you spend in meeting after meeting, with your weekends devoted to activism – it’s incomprehensible for many of my friends and family. And it’s tough.”

Lorena is an exception in the political landscape. Uruguay ranks 103rd out of 189 countries in terms of representation of women in Parliament, according to the Inter-Parliamentary Union (IPU) [1] . According to the same 2012 IPU study, only 12 per cent of the current members of the Chamber of Senators and Chamber of Deputies in Uruguay are women.

There is also a generational gap in the Parliament. Out of a total of 99 parliamentarians, there are only three elected members under the age of 30. All three are men.

In order to change this situation, during 2012 UN Women, together with UNDP and UNFPA, conducted an unique tutorials programme aimed at young women politicians between the ages of 18 and 30. 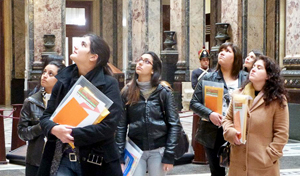 Six of the 25 young women leaders who took part in the tutorials visit the Legislative Palace in Montevideo. Photo: UN Women / Mónica Álvarez

For a period of approximately three months, 25 young women leaders from the four political parties with legislative representation in Uruguay spent time with their political leaders. Acting as tutors, male and female political leaders took part in various training activities, workshops and gatherings. It was a cross-party effort with a spirit of co-operation.

“In discussions, the women with the longest experience told us that they had had to adopt masculine ways in order to be heard and taken seriously,” explains Lucía Rodríguez, 25, of the governing Frente Amplio party. However, the younger women feel that times have changed. They are not prepared to pretend to be something they are not in order to be heard.

Lucía, Lorena, Patricia and Juliana are amongst the young women leaders – four young women who have opted for the political route in order to create a future based on equality. From different parties and ideologies, the four women are working to have a place at the political table and took part in the tutorials programme. For many years, they have been dedicating much of their time, energy and thought to this. They are well aware of the bitter experience of a space that resists the presence of women and young people. They are learning the value of uniting and fighting side by side to open more spaces to more women in politics. Gender solidarity is the tie that binds them.

“Personally, I gradually built up courage. When I moved into the party’s decision-making circles, during those first conventions no women spoke until I made myself do it,” says Patricia Soria, 24. She feels that many people are now used to her presence in the Colorado Party. “The first time was odd: I stood up in front of 500 people. Some of them were listening to me and some were more interested in what I was wearing.”

During the tutorials, Patricia and the other young women participants extended their formal and informal political networks. They increased their self-confidence by gaining communications and debating skills and enhanced their understanding of the ground rules of politics. The experience encouraged them to consider their future and imagine themselves in a political career, as well as deepening their interest in gender equality. Furthermore, they attempted to bring home to the parties the conviction that, by involving women, parties and politics stand to gain.

Juliana Morales, 28, of the Independent Party, knows that women’s rights have never come easily. She sees the forthcoming elections as a great opportunity. For the first time, a law will be in force which obliges all parties to have at least 30 per cent women among their candidates for election.

The law was passed in March 2009. It establishes the obligation to include people of both genders in each three-person shortlist of candidates, both as first choice and running mate, in the electoral lists presented in the three elections: local, national and departmental. These three form the five-year electoral cycle in Uruguay. The law also applies to elections of leaders from the political parties. This law was first applied to the local elections of 2009 and will apply for the first time in the national and departmental elections of 2014 and 2015, respectively.

For Juliana, the opportunity is clear: “Now we must be united and take a leading role in elections that we hope will go down in history as the moment when Uruguay went full speed ahead to equality.”