A new series of commercials featuring public figures, as well as workshops and support for women politicians from all parties, and a project to broaden the current quota law are all stimulating the participation of women in decision-making in Uruguay. 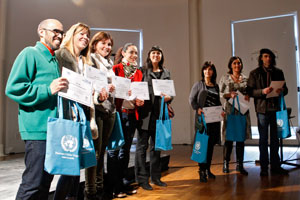 “Recently, Uruguay has made headlines around the world by passing laws and measures considered progressive. However, on some basic issues we are still a long way from the headlines. We are more likely in the sidebars,” starts the ad starring well-known Uruguayan actor and journalist Christian Font. “The participation of women in the spheres of decision-making and management of our country is not a politically correct demand,” he continues. “It is absolutely necessary. We still have a long way to go, to achieve a democracy with equality of men and women in parliament. Do your bit for the quotas.”

In this South American country, which passed a gender quota electoral law in 2009 that will come into force for the first time in the general elections in October 2014, this is one of a series of 11 video commercials featuring public figures that raise awareness of the importance of having more women in decision-making in Uruguay.

The ads feature well-known Uruguayan actors, journalists and artists and the Resident Coordinator of the United Nations system in Uruguay, Denise Cook. All those featured wrote their own messages and the ads started airing in June on various TV channels across the country, as well as via social networks.

They were officially launched on 16 July in the capital city of Montevideo as part of the "Do your bit for the quota" campaign, as a result of the "Political participation and empowerment of women" project supported by UN Women’s Fund for Gender Equality. Three civil society organizations spearheaded the high-profile campaign: "Cotidiano Mujer" [Daily Women], the National Monitoring Committee (CNS) and Women Citizens' Network (CIRE).

The three feminist organizations saw the need to create spaces across the country for women to meet and discuss, to encourage trust and strengthen links between those aspiring to be candidates in the upcoming elections, those seeking leadership roles, and those active in civil society.

In the current legislature, women account for only 13.1 per cent of the Uruguayan parliament. This figure places Uruguay in 103rd place in the world ranking of women in parliament by the Inter-Parliamentary Union and UN Women, much below the world average (21.8 per cent) – which is all the more noteworthy in a region recognized for relatively high levels of female political representation.

“We Uruguayan women have to come to the 2014 elections united, organized and active. Democracy owes us an historic debt and it is vital, as the song says, for us to be strong and united, like a wall,” says Milka Sorribas, one of the coordinators of the three-year-long project that began in early 2013. It has already mobilized more than 600 women across the country in support of parity. 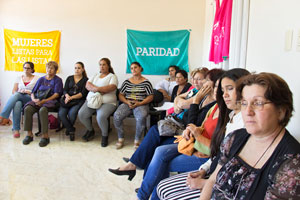 The project efforts are translated through workshops to build a common agenda for women from civil society and women politicians from all parties; supporting female politicians; and drafting a bill to broaden the law on quotas, collecting at least 5,000 signatures in support of the text. Called "Women ready for the lists", this component of the FGE project seeks to expand the boundaries of the current quota law, and bring it to the goal of full parity (50-50 gender representation).

In the initial phase of this project, workshops were conducted in all the government departments of the country, including with the Assembly of Women of Montevideo, which convened more than 150 women.

“Personally, by taking part in this project, I've found myself again,” says Marta Piñeiro, who attended the workshops as a political and social activist from the Department of Rivera, in the north of Uruguay. “And it was the same for all of us… we were reminded that we are realistic, but not pessimistic; that a better life for women also depends on our commitment and obstinacy; that this change is playing out on every street and every corner, and that we want to be part of this change, so we can look our mothers, our grandmothers and our daughters in the eye. The future depends on us, women.”

These workshops galvanized sustained participation from all political parties and from civil society, creating a foundation of local support and a lobbying network which is advocating for an equality agenda during the next general elections in October.

Cotidiano Mujer coordinator Lilián Celiberti says an important impact of this project was that, “The organization and visibility of the country's female politicians have been strengthened and it has encouraged them to submit their nominations for the next elections. With their "READY for the LISTS" banners, they are challenging the patriarchy in every one of the political parties and civil society forums.”

Collection of commercials, "Do your bit for the quotas. Women on a par"

Young Uruguayan women aim to boost their role in politics

For more information, check out the In Focus editorial package on Women in Power and Decision-making on the new Beijing+20 campaign website.