Progress for women in politics, but glass ceiling remains firm

The Women in Politics Map 2014 launched by the Inter-Parliamentary Union (IPU) and UN Women today shows that while progress on women’s political participation continues to be largely positive across the world, glass ceilings remain firmly in place for women at the highest levels.

The Map, which presents the latest data on women in executive government and in parliament, reveals similar regional trends in women’s representation in both spheres with the Americas, Europe and Africa outperforming the Arab, Asia and Pacific regions.

“Every election is a critical opportunity to make progress towards the increased participation of women as voters and as candidates,” says UN Women Deputy Executive Director John Hendra. “This map shows the value of having data, of being able to measure and track women’s political participation over time. It’s a great tool for benchmarking progress and for ensuring accountability."

In executive government, the percentage of women in ministerial posts has now reached 17.2 per cent, up from 16.1 per cent in 2008.

By 1 January 2014, there were 36 countries with 30 per cent or more women ministers, a jump from 26 in 2012. With 14 women in such posts, Nicaragua heads the global table of women in executive government, followed by Sweden, Finland, France, Cabo Verde and Norway.

Apart from the Nordic countries, it is the Americas and Africa regions which have the highest numbers of women ministers, although figures for Africa have stagnated at 20.4 per cent since 2010. Nevertheless, the Arab, Europe and Pacific regions also witnessed some growth.

Political commitment and policies are pre-requisites for women’s progress in political representation. Albania and France are strong examples of this. In 2012, Albania ranked 84th in the world for women ministers. It now ranks 27th with 30 per cent of women ministers following the decision of new Prime Minister Edi Rama to give more responsibility to women and youth.

The data on women in politics also sheds light on the progress made on women in parliament. IPU data shows that the percentage of women MPs is now at a record high of 21.8 per cent globally with numbers growing every year. There are also 46 countries with more than 30 per cent of women MPs in at least one chamber, up from 42 in January 2013. The trend, if it continues, would bode well for women’s political participation in the future.

“More women are now in politics and influencing the political agenda at higher levels. That is clear. But not at the very highest level,” says Anders B. Johnsson, IPU Secretary General. “Some leaders have broken the glass ceiling for women through their own personal vision and political will. They have shown the critical importance of political leadership in effecting change. We now need more leaders to show the same political courage.

Another positive trend highlighted in the IPU-UN Women Map is that while the traditionally “soft” portfolios such as Social Affairs, Education or Women’s Affairs continue to be the most common among women ministers, more women are now holding some of the so-called “hard” ministerial portfolios such as Defence, Foreign Affairs and the Environment.

In sharp contrast to these more positive figures and trends is the slight decline or stagnation of figures on women Heads of State/Heads of Government and women Speakers of Parliament.

Since 2012, the number of women Heads of State or Heads of Government has decreased slightly from 19 to 18.

The Americas is the region with the largest number of women at the highest political level with six Heads of State or Heads of Government. The Pacific is the only region without women in these positions.

Women in the executive

Every country in Africa and the Americas has at least one woman in a ministerial position.

In 2014, there are eight countries that have no women at all in government, a decrease from 14 in 2012 – Lebanon, Saudi Arabia (Arab region), Pakistan and Brunei Darussalam (Asia), San Marino and Bosnia and Herzegovina (Europe) and the Solomon Islands and Vanuatu (Pacific).

The number of women leading a Ministry of Defence has doubled from seven to 14 since 2012, the highest ever.

The number of women in charge of foreign affairs and international cooperation has risen to 45, the highest number since 2008.

Sweden is the only country in the top five nations for the number of women ministers and women in parliament.

The global average of women in parliament has registered a record annual increase of 1.5 percentage points, reaching 21.8 per cent on 1 January 2014.

The Americas maintains its lead as the region with the highest average of women MPs at 25.2 per cent, while the Arab world has witnessed the biggest regional increase from 13.2 per cent to 16 per cent.

The Women in Politics Map 2014 can be found here: http://www.ipu.org/pdf/publications/wmnmap14_en.pdf 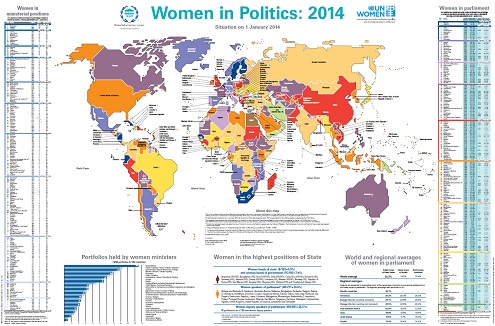 Watch an archived version of the webcast of the IPU-UN Women press conference to launch the Women in Politics Map 2014, 11 March, 11 a.m., UN Secretariat, New York.