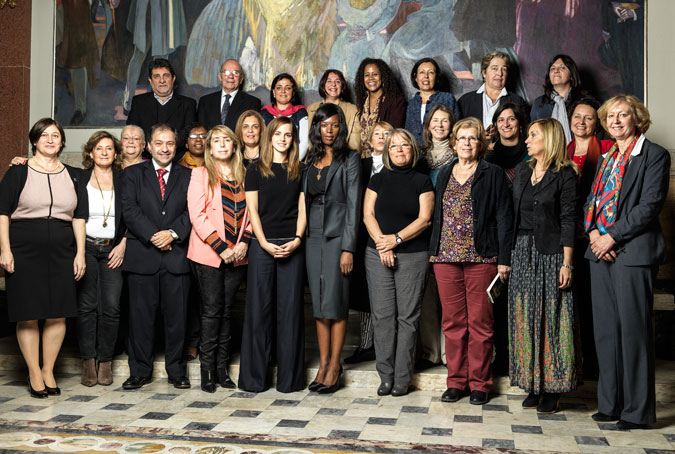 Emma Watson met with women's advocates and parliamentarians at an event in Uruguay on 17 September. Photo: UN Women

(Montevideo) On her first country visit as UN Women’s Goodwill Ambassador, acclaimed British actor Emma Watson today highlighted the need for women’s political participation and leadership at all levels. Ms. Watson’s visit to Uruguay comes at an opportune moment as the country gears up for national elections, and where a one-time quota law guaranteeing 30 per cent women’s political representation will be applied for the first time.

At a meeting hosted by the organization Cotidiano Mujer, a grantee of UN Women’s Fund for Gender Equality, together with partner organizations CIRE (Ciudadanías en Red) y CNS Mujeres, Ms. Watson met with women’s advocates from around the country, and listened to their strategies for increasing women’s voice and agency across all political platforms.

“Women’s rights are personal to me, especially on political participation and leadership. I am delighted to be here today as a Goodwill Ambassador for UN Women and learn about the work on the ground, hear from the people at the frontlines, and to understand what is working and what is not. I am here to support and to amplify these voices and share this work with a global audience,” said Ms. Watson.

“Emma is a strong voice for young people worldwide. Her commitment to the issues that we work on at UN Women multiplies our ability to reach and engage more young people — who are key to advancing gender equality. This visit calls attention to the importance of women’s full and equal participation in the decisions that affect their lives,” said UN Women Executive Director Phumzile Mlambo-Ngcuka.

Globally, women’s political participation remains low, with only one in five parliamentarians being a woman. In Uruguay, in spite of efforts, women’s representation in Parliament stands at 13.1 per cent, placing the country at 103rd position in the world ranking of women in Parliament by the Inter-Parliamentary Union and UN Women, below the world average (21.8 per cent).

To bring a historic change, women’s groups are galvanizing support by leveraging the quota law, and by strengthening alliances between the women's social movement and political parties, across the country’s 19 departments.

“Women must have a say in matters that affect their countries, communities and families. After all, they are half of the population, so women’s equal participation in decision-making is a question of justice and democracy,” said Ms. Watson. “I have learned that it is also a question of priorities, as women are more likely to focus on issues such as education, health, unpaid care economy and the environment. These are important issues that affect all of us.”

During her stay, Ms. Watson will meet with top ministers and government officials and participate in a youth dialogue with young women politicians and activists. She will also be part of an event with parliamentarians, where women’s rights activists will submit signatures calling for an extension of the national quota law and gender parity in the electoral lists of political parties. The event is the culmination of a high-profile “Do your bit for the quota” campaign, which was launched in July.