With support from UN Women’s Fund for Gender Equality, the Network of NGOs in Trinidad and Tobago is training women to be more effective in running for election. They seek to learn the rules, use the rules and change the system. 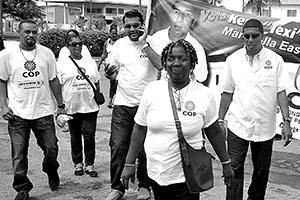 Like a DJ, she stands aboard the campaign truck, microphone in hand, singing along “we’re ready” and dancing to soca, calypso and dancehall rhythms, popular even during elections in Trinidad and Tobago.

Campaigning isn’t always so much fun. “We go to every single house. Sometimes we meet up with unfriendly dogs; sometimes we have to cross ditches and have boots on to make sure we don’t slip in the mud,” says 51-year-old dentist and now local councillor Hilary Bernard.

All the hard work paid off last October, in her second bid for public office, when she handily won the local election to represent the Arima northeast electoral district (population 4,028), in the central northern part of Trinidad.

Having grown up in what she describes as a strict and traditional “chauvinistic” household, Hilary is used to shattering expectations. She went against her parents’ wishes and struggled financially to pursue her goal of attending dentistry school in the United States. “The worst thing that you can tell me is that I can’t do something,” she chuckles.

With her dentistry degree in-hand, she returned to Trinidad and Tobago and opened a private practice. She got involved in her local church, and through helping others and seeking justice, she started seeing local politics as the means to make needed changes. After losing her first election in 2010, she decided to try again, but be better-prepared.

Hilary is among the more than 100 women candidates who have been trained by The Network of NGOs of Trinidad & Tobago for the Advancement of Women, a national “umbrella” organization for all women’s organizations in the country, and a grantee of UN Women’s Fund for Gender Equality. Potential candidates from across party lines go through a rigorous eight-module training course, called “Train, Run, Win and Lead”. They learn about the basic functions and responsibilities of government, communications, leadership and gender-responsive budgeting.

Arlene Ramdeo, 41, says the training gave her the confidence to speak in public spontaneously and in any setting. She also ran unsuccessfully in 2010 but was elected shortly after being trained in 2013, beating out three male contenders for the district of Erin, in the southwestern part of Trinidad.

“Before, I could not speak to the public but when I finished that training, I was well versed,” says Arlene. “They also showed us how to budget, how to listen to people first before you make a decision. That was very useful advice.”

Hilary also describes the training as an eye-opener. “It helped me see that it was quite OK and acceptable for a woman to put herself forward. Before that it seemed that to be a woman and aspire to leadership was being ‘pushy’.” Since the training involved women from all the political parties, she says they learned that women could be rivals without being enemies. “We learned to run a campaign without smearing anyone, no poison darts, or throwing stones. I was able to focus on the positive, what I could offer, and be sympathetic to what I saw as failings of my predecessor.”

Since January 2013, there have already been 40 training sessions, and the network keeps in touch with all its participantss thereafter, constantly offering specific sessions, such as a forum on financing for women in political parties that Hilary says she plans to attend.

The project aims to train and support at least 700 women by December 2014, including current and prospective women candidates in 14 municipalities and the Tobago House of Assembly (THA), general elections candidates, and youth and activists.

It seeks to bring about a process of change towards inclusive and participatory local and national governance with expanded capacity in the municipalities and THA for gender-sensitive planning.

The ultimate goal is to develop women’s political capacity to learn the rules, use the rules and change the system. It seeks to raise awareness among women about their right to equal access to, and full participation in, power structures and decision-making, as guaranteed in conventions and declarations subscribed to by Caribbean governments, such as the Beijing Declaration and Platform for Action, which the Network witnessed take shape at the Fourth World Conference in Beijing in 1995.

“The training, forums, workshops and networking opportunities not only build individual capacities in participants but foster an atmosphere for collaboration that allows for solutions to be identified that is beneficial to all,” says Terry Ince, Project Manager of the Network’s Women's Leadership in Local Government Project.

Results are already visible. Half the training participants who opted to run in the 2013 local elections won seats, almost all formerly held by men. The overall portion of women winning seats as local councillors edged up from 29 to 33 per cent, and women have captured a significant number of leadership positions, including 21 aldermen and nine women leading statutory committees. There has also been an unprecedented challenge by women for the leadership of all four national parties.

The Network has also offered technical assistance to women candidates vying for national party leadership, as well as to their campaign teams, and will run training programmes leading up to the 2015 parliamentary elections.

For more information on Women in power and decision-making, check out the In Focus editorial package on the new Beijing+20 campaign website.

Related News
16/07/2014
‘Ready for the lists’, say Uruguayan women
27/06/2014
Women in power and decision-making: Strengthening voices for democracy
18/03/2021
Mexico joins Bolivia in efforts to stop violence against women in politics
09/11/2018
Take five: “Legal reform did not change patriarchal systems or machismo culture overnight”
09/04/2018
In the words of Blessing Ihauku Daru: “Women need to be in the corridors of power and politics”
END_OF_DOCUMENT_TOKEN_TO_BE_REPLACED