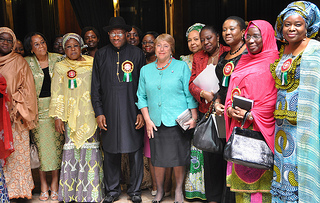 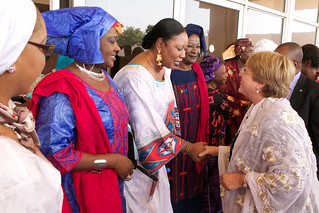 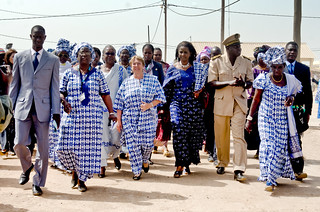 New York, 4 January — Under-Secretary-General and Executive Director of UN Women Michelle Bachelet will highlight the urgent need for increasing women's participation as the foundation for nation building and economic progress during her forthcoming trip to West Africa.

During the visit from 7- 11 January Ms. Bachelet will visit projects which advance women's economic empowerment and rights on the ground, and meet with the Heads of State and other high-ranking Government officials in the three countries. Starting the weeklong visit in Senegal, and then travelling to Mali and Nigeria, Ms. Bachelet will also hold discussions with civil society leaders, academics, private sector and UN System colleagues.

During her day long visit to Mali, the Executive Director will meet with women who have been displaced and affected by the escalating violence in the Northern regions, as well as activists who have been providing assistance, often at the risk of their own lives. She will underline the critical need for inclusiveness in peace processes and that broad social engagement in conflict resolution is imperative for long-term stability and democracy. In her meetings, she will reiterate the message that she delivered to the UN Security Council in November calling upon the international community to adopt specific measures to protect women's rights and prevent violence against women and children, and emphasizing that it is time to dedicate funding to reparations, care and the empowerment of survivors.

In Senegal and Nigeria, Ms. Bachelet will call for robust and effective policies that can ensure women's full participation in the economy and in political decision-making across the board, from the urban to the rural areas.

The visit comes soon after the UN General Assembly approved banning the practice of Female Genital Mutilation (FGM), which is prevalent in many of the West African countries. Ms. Bachelet will strongly urge African leaders to ensure ending FGM and all forms of violence against women, which affects seven in ten women in many countries worldwide. She will ask them to COMMIT—through a newly-launched UN Women initiative which calls on Governments to implement international agreements on ending violence against women and commit to new, concrete steps to end this scourge that affects women worldwide.