“In Mali as well as in the Sahel, women are among the most affected by the crisis. They are also those with the strongest understanding of conflict dynamics. But yet, we remain confined at home and excluded from decision-making,” said Aziza Mint Mohamed, former Deputy Mayor of the historical city of Timbuktu in Mali as she shared her story with regional and international experts.

Fleeing her town when it was taken by the rebel forces in mid-2012, Aziza soon became an active mediator and an advocate for women affected by conflict. She encouraged rebel leaders to engage in peaceful dialogues and guided fact-finding missions to review the situation of refugee camps. 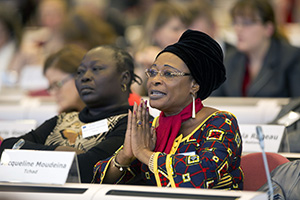 Ms. Mint Mohamed’s story was echoed by many of the participants at the High-Level Conference on Women’s Leadership in the Sahel region held on 9 April who shared their own experiences of conflict and recovery. At the meeting, women from the Sahel region called for greater participation in all international forums and peace talks to resolve the crises in the Sahel. They also urged the international community to dedicate more funds to advance women’s rights and empowerment in the region.

“I was deeply moved by the accounts I heard from women about the exceptional physical and human insecurity women experienced during the recent conflict in northern Mali, and about the problems of chronic poverty and marginalization elsewhere. As they pointed out, there are political, environmental, developmental, and humanitarian crises in the Sahel that demand urgent remedy all with a marked impact on women, often worsening the inequalities between women and men,” said Ms. Lakshmi Puri Acting Head of UN Women and Assistant Secretary-General. “In addition, women spoke of an increasingly restrictive social environment limiting their mobility, productivity, and ultimately, their capacities to function as effective leaders and defenders of women’s rights,” she added.

Organized by the European Union, the Office of the Secretary-General’s Special Envoy for the Sahel and UN Women, the Conference gathered some 40 women ministers, activists and experts from Algeria, Burkina Faso, Chad, Mali, Mauritania, Niger, Senegal, as well as representatives from the African Union and the Economic Community of West African States (ECOWAS) in Brussels, Belgium.

Aminata Diallo, who stood as the first woman candidate for the last presidential elections in Mali and who plans to stand again this year if elections are held as planned, stressed that the participation of women is fundamental to development. “If half the Sahel population is marginalized, it will never achieve development. Peace has to enable development and the end of women’s suffering,” she said.

The key recommendations put forth by the women from Sahel at the Conference included: inclusion of women in all national, regional and international forums convened to resolve the Sahel crisis while ensuring that at least 30 per cent of participants in decision-making and politics are women. Secondly, the women called for allocating a minimum level of 15 per cent of all national and international budgets for development and peacebuilding on promoting gender quality and advancing women’s rights in the Sahel. And third, they called for increased visibility and respect for women’s roles as leaders and resolvers of crises – including in the media and among traditional communities.

Additional recommendations included the implementation of regional solutions involving all regional and international entities and most importantly to ensure a participatory process with people from the Sahel. The establishment of Truth and Reconciliation Commissions and mechanisms of transitional justice to end impunity for perpetrators of gender-based violence was also prioritized.

During the Conference, women interacted with Catherine Ashton, High Representative from the European Union for Foreign Affairs and Security Policy and Vice-President of the European Commission, Romano Prodi, Secretary-General’s Special Envoy for the Sahel and Lakshmi Puri, Acting Head of UN Women and Assistant Secretary-General.

Welcoming the decision by Special Envoy Prodi to establish a women’s advisory group, Ms. Puri said: “I cannot imagine a more valuable source of guidance for the Envoy, and I know that the EU and the UN stand ready to support viable solutions that promote inclusivity, resilience, and peace. Women of the Sahel have tremendous capacities to bring solutions in situations of instability.”

She noted that UN Women is offering technical and financial support to a range of initiatives intended to build women’s influence on crisis response processes in the region. These range from support to regional women’s peace networks, such as the Network on Peace and Security for Women in the ECOWAS Region, to support for important national initiatives to ensure peaceful political processes, such as the Women’s Election Situation Room in Senegal that ensured fair and peaceful participation for women in the 2012 presidential elections.

In Mali alone, UN Women has supported training for women leaders in mediation skills and has ensured their access to visiting mediators and envoys, brought gender and women’s rights training to the Malian military, supported market engagement by internally displaced women, and conducted some of the very first studies of the extent of conflict-related sexual violence in the North of the country. As one woman participant noted, UN Women “est toujours prêt et toujours là” (is always ready and always there) for women from the Sahel.

The recommendations of the Conference will contribute to the High-Level Conference of Donors for the development of Mali, to be held in May in Brussels.