Changing the landscape with all-women worksites in India

Rural women are now able to demand work, manage worksites and ensure wages are paid, largely due to a project that has reached over 30,000 women in 69 villages in northern India.

Hari Bai is a woman from the Scheduled Caste community, from the lowest rung of India’s caste system and traditionally excluded in society. Having also recently learned how to read, she fought against all odds to become a “mate” or a worksite supervisor under the world’s largest pay-for-work programme, the Mahatma Gandhi National Rural Employment Act (MGNREGA). 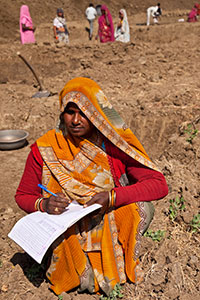 Now, she basks in the newfound respect she has gained from having attained a supervisory position.

“When I started going for the training, my husband was quite suspicious. But when he came to know about the benefits and its positive impact on our lives, he became more understanding,” says Hari Bai, who now works in Satavasa village of Lalitpur district, in the state of Uttar Pradesh.

The Government of India’s MGNREGA programme guarantees at least 100 days of employment a year for every adult member of a rural household willing to do unskilled manual work for the minimum wage of 120 Indian rupees (USD 2.00) per day. UN Women provides technical support for the popular programme, which mandates that one-third of those employed be women, and ensures their equal pay.

However, in many Indian states women’s participation in the programme is still low. In Uttar Pradesh, it is a mere 19 per cent (nationally, female participation is 56 per cent).

To spur women’s participation and to ensure accountability for the most marginalized, in 69 villages across five districts of Uttar Pradesh and four districts of Andhra Pradesh, UN Women’s Fund for Gender Equality supported a project called the Dalit Women’s Livelihood Accountability Initiative (DWLAI) that reached over 30,000 women. This project was implemented in partnership with the non-profit Gender at Work, and its local partner NGOs – Sahajani Shiksha Kendra (SSK), Vanangana, Parmarth and Lok Samiti. The project raised awareness about the MGNREGA programme, organized women into collectives, trained women to be worksite supervisors and run all-women worksites.

Results are already evident. In Chitrakoot district of Uttar Pradesh, a pond was constructed entirely by women, a majority of them from Scheduled castes. The project also aimed to help the women, many of whom were treated as “bonded labourers” by powerful feudal landlords, to assert and demand their right to employment. 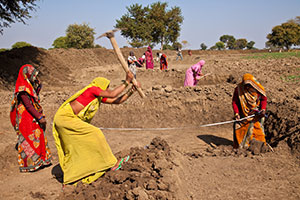 “The pond was managed and built entirely by women, with 100 women working together in constructing it, and the supervision of the work done by women mates,” said Chunni Lal Verma, head of the Basila village council, in Chitrakoot.

The efforts initially faced opposition from the male-dominated community. “Village people started saying that women who only know how to run a kitchen will never be able to use heavy tools used for digging,” says Kamala of Manikpur block in Chitrakoot. “We took this as a challenge.”

The project developed a module to train women ‘mates’ across all the project sites in Uttar Pradesh. The trainings provided information about MGNREGA, complemented by adult literacy programmes.

As a result of the training, which included information about workers’ rights under the programme, newly trained women workers and other women across Uttar Pradesh started demanding work under the government scheme. A 2012 evaluation commissioned by UN Women showed a steep five-fold increase in the number of Scheduled Caste women accessing work under the Act in 102 selected villages between 2009 and 2011. The numbers increased from 2,811 Scheduled Caste women in 2009 to 14,174 in 2011, due to the intervention.

In Lalitpur, Hari Bai and 9,000 other Scheduled Caste women were also able to open bank accounts to control their wages. The women went on to ask for worksite entitlements, such as drinking water, work shelters and first-aid boxes. And they demand accountability if wages are delayed, for the Act guarantees full wage payment within 15 days of work.

“If the Pradhan [head of the village council] doesn’t give money to the labourers on time, we tell him that we will come to his house and put pressure on him every day until the payment is made,” says Paan Bai, from Mahroni block in Lalitpur, smiling at her newfound assertiveness.

UN Women continues to scale-up the efforts and results that emerged from this FGE project, to other states in India, and is working closely with governments and partners for women’s empowerment through MGNREGA.

Related News
14/06/2012
Expanding jobs for rural women in India
08/08/2013
International Day of the World's Indigenous Peoples
08/06/2022
A comprehensive approach to ending violence against women in rural spaces in India
12/09/2019
From Tanzania to Algeria, rural women are taking charge of their lives and livelihoods
22/05/2018
From where I stand: “Women have the solutions”
END_OF_DOCUMENT_TOKEN_TO_BE_REPLACED