Officers from 16 countries, including, Cyprus, Ghana, India and Tajikistan received training on how to respond to sexual violence in conflict areas.

“If you were a UN peacekeeper in a conflict country, what would you do if you came across a badly wounded teenage girl who had been gang-raped? Which UN rules and regulations would you follow? What would be your responsibility?”

These were just some of the questions that 56 UN peacekeepers considered during a two-day training workshop organized by the Centre for United Nations Peacekeeping (CUNPK) and UN Women in September 2013. It was part of a series of innovative modules designed by UN Women and the UN Department of Peacekeeping Operations (DPKO) that use videos, photos, stories and real examples to help peacekeepers respond to similar situations of sexual violence during their missions.

Participants are presented with hypothetical scenarios based on real-life cases. They are given detailed information about potential threats, national and international assistance agencies involved, the geography of the area, etc., and asked how each actor should respond. 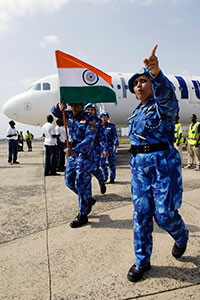 Marking a first in the history of UN peacekeeping, an all-female Formed Police Unit arrived in Liberia on 30 January to strengthen the rule of law and maintain peace in the war-torn country as part of the United Nations Mission in Liberia(UNMIL). The 103-strong operational unit from India will receive logisitics support from 22 men. UN Photo/Eric Kanalstein

“Through the training, we help the peacekeepers to understand their mandate and rules of engagement in line with the obligations of the United Nations. These modules also introduce the officers to the prevailing conditions in the countries where they are to be deployed,” said Rebecca Tavares, Representative of UN Women for India, Bhutan, Maldives and Sri Lanka.

“The presence of female peacekeepers … positively impacts the confidence of the local population; the reporting of gender-based violence increases; and in fact, my troops become role models for the local girls,” says Seema Dhundia, Deputy Inspector General of the Central Reserve Police Force in Chandigarh Union Territory, north of New Delhi. She was the commander of the world’s first all-female UN peacekeeping force that was dispatched to Liberia in 2007.

UN Women in India has facilitated more than 20 training sessions on gender and sexual or gender-based violence prevention and response over the last two years, in collaboration with CUNPK, in both international and national courses.

They also jointly organized a summit on “Women in Peacebuilding” in New Delhi in February 2013, which included the participation of 100 women peacekeepers, peace mediators, political authorities, senior government officials, academia, and civil and military personnel from UN Missions. It generated momentum and political will to advocate for more women in peacekeeping, and resulted in an Outcome Declaration endorsed by the Chief of the Indian Army, Indian Permanent Mission and DPKO.

“Sexual violence is not just a women’s issue, it is a security issue and concerns men because in 99.9 per cent of the cases, men are the perpetrators of sexual violence. It is important that a male, a military officer is talking about this subject. That makes an impact on audiences,” said retired Major General Patrick Cammaert, instructor of the scenario-based training module. He served as Force Commander in Eritrea and Ethiopia for several years, and was appointed Military Advisor in the United Nations Department for Peacekeeping Operations in 2002.

With the adoption of resolution 1325 in 2000, the UN Security Council recognized the importance of women’s full involvement in peacekeeping and peacebuilding processes as well as the crucial input they have to offer.

“Women are different from men in peacekeeping situations because they are able to see events with a more humanitarian perspective,” said Flt Lt Kristie Winters, from the Australian Air Force, who attended the multi-country training in September.

Cammaert agrees: “Women peacekeepers do it differently and see the issues from a different angle. There is no doubt that we need more specialized female military officers trained in sexual violence.”