In Fiji, communities mobilize ground-up to end violence against women and girls

Because they are always present on the street and in markets, homeless people and those who work in public spaces witness a lot of violence in Fiji, including against women and girls. While often neglected in outreach initiatives, a new UN Women-sponsored project is actively educating and engaging this male-dominated group in violence-prevention efforts.

A national survey of women in Fiji in 2012 by the Fiji Women’s Crisis Centre found that 64 per cent of women had experienced physical or sexual violence or both at the hands of an intimate partner.

As part of the Streetwize Project, over the past two years, nine workshops on gender-based violence and human rights conducted by the Foundation of the Peoples of the South Pacific International (FSPI) has been working to change the behaviour and attitudes of street workers and the homeless in Fiji’s capital, Suva (total population 175,000). So-called street dwellers in Suva include “shoeshine boys” and “wheelbarrow boys”, who can be seen daily shining the shoes of passers-by or carting goods to and from markets and shops.

“We saw a great potential in developing the group as agents for change in the protection of women and girls and the promotion of gender equality,” explains Streetwize Project coordinator, Juita Korovulavula. 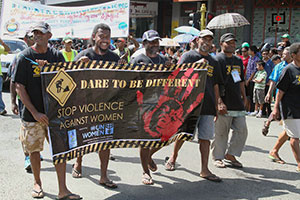 Street dwellers march for an end to violence against women as part of the Hibiscus Festival parade, August 2013. Photo: Foundation of the Peoples of the South Pacific International

Sakiusa Cama, who participated in the workshops, said he has changed how he speaks to women and he has witnessed a transformation in fellow street dwellers, being much more courteous and respectful.

The informal Wheelbarrow Association has also instituted a deterrent for their own members: to strip the licenses of members found guilty of committing any form of violence against women.

In August, the wheelbarrow and shoeshine boys took part in the Hibiscus Festival parade and marched through Suva city with banners raising awareness to end to violence against women and girls. An estimated 300,000 people watched the parade, on the street and television.

Meanwhile, the Ministry of Education’s National Substance Abuse Advisory Council (NSAAC) is educating students and teachers alike to change negative social norms and attitudes about gender and violence. Since 2011, NSAAC has trained 417 Peer Educators and 302 Support Teachers, who have collectively reached close to 8,000 students throughout Fiji.

“The education sector has the responsibility to not only educate but also transform attitudes and behaviours early about this issue,” said Misaele Driubalavu, of the NSAAC, a grantee of the UN Women’s Pacific Regional Ending Violence against Women Facility Fund. In addition to financial support, UN Women provides a range of capacity development and technical training on ending violence against women.

In 2013, efforts focused on eight schools located on the remote islands of Kadavu, Vanuabalavu, Ovalau and Lakeba in Fiji’s Central Division. “We targeted these islands because the data collected from schools in this region showed an increase in violence and sexual misdemeanors among students,” explained Driubalavu.

Early results are evident. Students have been sharing information with their peers on violence against women and girls, its impacts upon survivors and their families and ways to recognize healthy and unhealthy relationships. The Peer Educators with more awareness on the issue are referring students in need to counsellors and support teachers. 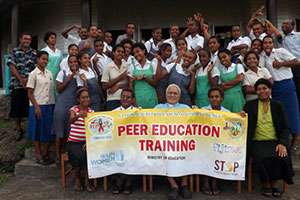 “A student who was a survivor of an attempted rape informed me of what had happened. I was shocked and thought maybe it was her fault,” said a 19-year-old male student who attended the programme, admitting to his narrow-minded perception prior to the training. “After attending the Peer Education Training programme, I learned that it is never a girl’s fault if she is raped or sexually assaulted. I learned to consult those who can offer appropriate services and through the programme I was able to help my friend in her hardship.”

The Peer Educators are disseminating information in their classes, school festivals and other events, such as inter-school sports tournaments.

“I’m seeing an improvement in knowledge of violence and attitudes towards women and girls,” said Taniela, a Support Teacher from Kadavu Island. “I’m hopeful that positive behavioural changes that we are instilling now, like respect for women and girls, can be sustained as these students start families of their own.”