On occasion of the International Day for the Elimination of Violence against Women, the European Commission and UN Women today announced a new joint programme on Preventing and Addressing Violence against Women and Girls. The programme, which will support initiatives by national institutions and civil society organizations in Albania, Timor-Leste and Mexico, was announced by EuropeAid Director General Fernando Fructuoso de Melo and UN Women Assistant Secretary-General and Deputy Executive Director for Policy and Programme, John Hendra. 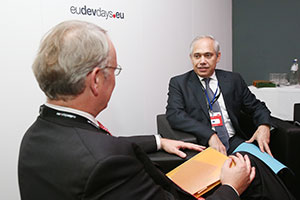 Violence against women is the most unacceptable expression of gender inequality. It can take many forms, from domestic violence, to trafficking and can even lead to death. All our efforts must be joined as long as these kinds of practices remain. That is why the European Commission is particularly welcoming this new project.

“Violence against women and girls is a pandemic that affects one in three women worldwide, and it’s rooted in gender inequality. As the post-2015 development agenda is being formulated, UN Women is urging world leaders to focus on tackling this scourge. This new EU- UN Women programme that is being announced today represents an important contribution to raising awareness and triggering action to end many forms of violence against women and girls in multiple settings, through ground-up efforts.” said Mr. Hendra.

The new programme “Preventing and Addressing Violence against Women and Girls (VAWG) in Albania, Mexico, and Timor Leste” is financed through a contribution of EUR 1 million from the European Instrument for Democracy and Human Rights (EIDHR). The programme will address different forms of violence against women and girls in different contexts: trafficking in Albania, domestic violence in Timor-Leste and femicide in Mexico. The programme will support legislative changes, preventive measures and service provision for survivors.

According to a global study conducted by the World Health Organization (WHO) in 2013, 35 per cent of women worldwide have experienced either physical and/or sexual violence. UN Women research also shows 603 million women live in countries where domestic violence is not yet considered a crime. Approximately 125 million girls and women in the world have suffered female genital mutilation. Trafficking ensnares millions of women and girls in modern-day slavery. Women and girls comprise 80 per cent of the estimated 800,000 people trafficked annually. And femicide, the murder of women because they are women, is taking an increasingly brutal toll.

The announcement of this new programme follows a strategic partnership agreement between UN Women and the European Union in April 2012. The EU and UN Women regularly work together in areas of gender-responsive budgeting, peace and security and political participation of women, in several regions around the globe.

Mr. Fructuoso de Melo and Mr. Hendra announced this new partnership effort at the European Development Days, where Mr. Hendra is participating in a High-Level Panel on Gender Equality and Women’s Empowerment in Post 2015.

Website of the DG Development and Cooperation - EuropeAid:
www.ec.europa.eu/europeaid

On the European Instrument for democracy and Human Rights (EIDHR):
www.eidhr.eu

UN Women’s In Focus on Ending Violence against Women and Girls:
https://www.unwomen.org/en/news/in-focus/end-violence-against-women