Across the world, many women tell a similar tale: they till the land, produce the food, yet lack secure rights to land, including being denied equal rights to inheritance. These women say they are vulnerable and constantly face the risk of losing their only source of food, shelter and income. But in situations where they are guaranteed their land rights, they are better able to provide for themselves and their family’s needs, from food security to income, nutrition and education.

Women’s access, use and control over land are directly linked to the protection of their human rights, such as the rights to life, housing, food and health. While several existing international human rights and policy instruments support this principle, there is an urgent need to adopt laws, policies and programmes to implement it effectively. 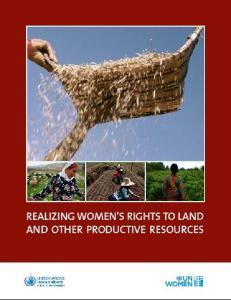 A new publication, Realizing Women’s Rights to Land and Other Productive Resources, highlights the urgent need to move the discussion on land towards a human rights-based perspective, with a stress on gender equality, and provides concrete guidance for lawmakers and policymakers.

The report argues that women’s rights to land are directly linked to global food security and sustainable development.  There are also gender-specific problems that can be addressed through secure land rights, such as protection against violence and HIV. Studies suggest that the threat of poverty often forces women to remain in violent relationships, with their access to food, housing, land and other productive resources tied to their relationship with a violent partner. Research also shows that such insecurity forces women to engage in behaviours such as unprotected sex, which puts them at an increased risk of contracting HIV. On the other hand, women who have secure land rights acquire more independence and power in their families and communities, as well as in their economic and political relationships, experiencing lower levels of violence and reduced vulnerability to HIV.

While at least 115 countries recognize equal land rights for women and men, effective implementation remains a major challenge. In some countries, cultural norms pose restrictions, limiting women’s rights to land and also affecting enjoyment of other rights, such as food, housing, work and education.

Another challenge for policymakers is the phenomenon of land grabbing and the increasing commodification of land. Because of increasing land pressures around the world, including climate change, there has been a rise in land grabbing, causing growing concern that women’s access to land could become an even bigger problem in the future.

The report provides several policy guidelines for realizing women’s land rights. Some of the key recommendations include:

The report urges prohibiting forced evictions of women, challenging discriminatory laws, and abolishing the concept of ‘head of household’ to allow women equal property rights in the event of marriage and divorce.
It adds that several international instruments guarantee human rights norms and should be at the centre of the debate on women’s land rights. These include the Universal Declaration of Human Rights, International Covenant on Economic, Social and Cultural Rights and the Convention on the Elimination of All Forms of Discrimination against Women.

The report is based on the results of an expert group meeting held in June 2012, convened by UN Women and the Office of the United Nations High Commissioner for Human Rights (OHCHR).

Related News
12/09/2019
From Tanzania to Algeria, rural women are taking charge of their lives and livelihoods
10/09/2019
In the Bolivian Amazon, women are protecting the forest and empowering themselves
01/02/2019
From where I stand: “I want to get involved in decision making in my community”
29/08/2018
Land rights at last for Sulaliyyate women in Morocco
07/03/2018
One room, her only home
END_OF_DOCUMENT_TOKEN_TO_BE_REPLACED