In the spring of 2012 the Moroccan Government granted men and women equal rights to benefit from incomes and profits gained from their land in a new order from the Ministry of the Interior. In the past, discriminatory laws had long deprived rural women of the Sulaliyyate ethnic group of land ownership and benefits in Morocco. 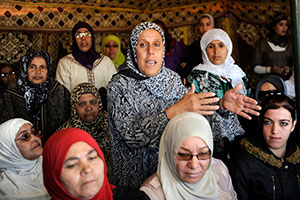 On the last day of her trip to Morocco to commemorate International Women’s Day, UN Women Executive Director Michelle Bachelet, met with rural women of the Sulaliyyate ethnic group, who have been striving for inheritance and property rights. Photo Credit: UN Women/Karim Selmaoui

Women had campaigned hard with the support of UN Women for their inheritance and property rights, so the new ruling was a historic victory.

The 2012 ruling underlines the need for national laws and policies to be in line with the Convention on the Elimination of Discrimination against Women. Article 2, in particular, requires States “to take all appropriate measures, including legislation, to modify or abolish existing laws, regulations, customs and practices which constitute discrimination against women.”

Morocco’s Ministry of the Interior is now boosting efforts to disseminate information on the ruling. They have launched a web portal (www.terrescollectives.ma) to provide users with information and data on collective lands, the laws and regulatory instruments governing land management, and information on the institutions that oversee the process. People’s response to the website has been positive.

“It is an initiative that answers, along with the 2009, 2011, 2012 rulings, to the commitments demanded by our association, as well as Constitutional dispositions regarding the right to access information. We are hoping that this will facilitate access to data and current affairs and allow civil society to follow-up on such issues,” said Khadija Oueldemmou, a member of the Democratic Association of Moroccan Women.

Collective lands represent the highest concentration of available land and natural resource reserves in Morocco. The collective lands historically belonged to certain ethnic groups and are governed by a law issued in 1919 regulating these groups’ customary practices. These lands were traditionally used collectively, though were later distributed to family groups, and more recently to male heads of households.

In recent years, the sale of collective lands to public and private real estate agencies has made people uneasy, and contributed hundreds of thousands of women feeling insecure, since compensation (money or plots of land located elsewhere) has traditionally only benefited men, regardless of age or marital status.

As lands around Sulaliyyate women are privatized, threatening their homes and livelihoods, UN Women along with the Democratic Association of Moroccan Women, are supporting their work and mobilization efforts. Training sessions on economic empowerment and leadership, community engagement and public speaking, have allowed the indigenous women to take their campaign to the broader public.

They made significant legal gains. In 2009 and 2010, following lobbying and high-profile press conferences held by Sulaliyyate women, Morocco’s Ministry of the Interior issued two rulings on the issue. These urged local authorities to ensure that gender equality principles are observed in sales, inheritances and property rights; and then expanded the recognition of women’s rights to sell and inherit communal land across the kingdom.

The latest 2012 ruling is a new step in the advancement of women’s rights in Morocco, allowing women not only to inherit or sell land but also to benefit from income from the land. However, these developments are limited to the extent that the rulings remain ministerial guidelines with a relatively limited legal status. These orders of the Ministry of the Interior are directives and can easily be removed by the Government.

Therefore, Sulaliyyate women are now advocating for a law that will institutionally ensure that the provisions in the three ministerial rulings are implemented. A law would ensure permanence. A petition, launched by the Democratic Association of Moroccan Women, calls for the law to affirm the equality between men and women on collective lands and property as well as incomes and compensation. Khadija says her Association is also identifying and training a small group of 25 Sulaliyyate women from all regions to improve on their communications and leadership skills.

“Our added value, our expertise, consists in training these women to become the leaders and spokespeople for this movement so that they can engage more directly in advocacy and learn to better position their demands,” she concludes.