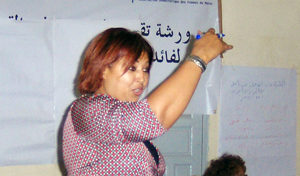 In your opinion, what are the benefits of the website on collective lands set up by the Ministry of the Interior?

The information available on the website describes the unique situation of the Soulalyates women. We believe that this is an important and very positive initiative. Especially when we remember that the Soulalyates case was originally a minor case. It was launched in 2007 when those women turned to our organization, ADFM, for support in claiming their rights. Today, it’s a matter of genuine social debate.

It’s being discussed in the newspapers, on television, on the Internet. It’s a subject of interest to the media. We believe that it was this advocacy that spurred the Ministry of the Interior into setting up the website. It is also considering a new organizational structure for the administration of collective land through regional management, under the supervision and control of the Directorate of Rural Affairs (DAR). The purpose will be to facilitate the management of complaints and people’s access to services for rural affairs.

Is the 2012 ruling from the Ministry enough to ensure that Soulalyates women enjoy the same rights of access to land as men?

We see this latest ruling as a great step forward. It is progress for the Soulalyates women as it refers to the universal rights of the person, the Committee on the Elimination of All Forms of Discrimination against Women, and the new Constitution. The circular also mentions the struggle of these women and the non-governmental organizations that support them.

Does this ruling have a practical application in all the provinces and regions affected by these issues? What are the obstacles that women face?

Tribal representatives reject these rulings or circulars. They do not recognize the right of women to benefit from these lands and their revenues on equal terms with men. Furthermore, there are some who do recognize this right but think that only certain women can benefit from it, depending on established criteria, for example women who are widows, handicapped, older, unmarried or who have no family.

Meanwhile, other tribes believe that only men or women with a national identity card can appear on a list of beneficiaries. There is also a lack of publicity for these circulars. There is a huge need for efforts at awareness-raising among men and women. There are still some women who do not know their rights or who believe that only men may inherit. These days, the Ministry of the Interior no longer allows lists of beneficiaries that do not include women.

What is the added value of the provisions of the new Constitution on access to collective lands?

The new Constitution gives firm backing and even greater legitimacy to the Soulalyates women’s movement. In all our correspondence and surveys, we now mention the provisions of the new Moroccan Constitution. This might be with reference to gender equality, citizens’ access to information, when rights are violated, etc.

What are the next stages in this struggle? How will the ADFM continue supporting the Soulalyates movement?

We cannot strengthen the capacities of all the Soulalyates women throughout Morocco. However, our added value and our expertise in the ADFM lie in training these people to become leaders and spokespersons for this movement. They will be able to engage in advocacy and in demanding their rights. I have personally witnessed this since we started supporting them. The Soulalyates women have an incredible internal strength. That’s what motivated us to teach them to channel that strength and organize themselves in order to demand their rights.

We use a strategy based on two principal areas: advocacy and capacity-strengthening – the latter involving training in communications, public speaking, leadership, etc. In addition, these women are also informed about their rights.

The next strategic phase in our support for the Soulalyates movement will involve identifying a special group of 20 to 25 Soulalyates women leaders, from across all the regions. They will receive more intensive training, especially in communications, public speaking and on new initiatives in the circulars. The aim is to prepare them to take part in the national discussion and debate on these issues.

Check out our interview with Ms. Khadija Ouldemmou from the Democratic Association of #Moroccan Women (ADFM)! owl.li/hCW5o

Related News
08/02/2013
In Morocco, encouraged by success, Sulaliyyate women make strides in land rights
09/03/2012
Remarks of UN Women Executive Director Michelle Bachelet at the “Soulaliyat Women Entitled to Land Property Rights” event.
12/09/2019
From Tanzania to Algeria, rural women are taking charge of their lives and livelihoods
29/08/2018
Land rights at last for Sulaliyyate women in Morocco
23/02/2012
Rural Women, Their Contributions and Challenges, to Be Highlighted at UN Commisssion on the Status of Women, 27 February – 9 March
END_OF_DOCUMENT_TOKEN_TO_BE_REPLACED