“Violence puts women behind […] and creates a situation that does not allow women to use their full potential,” said a woman, sitting in an airy, green park, after watching a gripping interactive theatrical performance on violence against women in Khulna, Southern Bangladesh in November last year. “The ultimate loser is society. 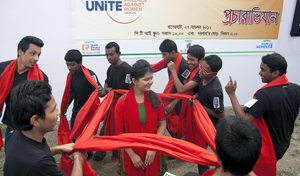 At the PTI School in the Bagerhat district of southwestern Bangladesh, youth perform interactive theatre on violence against women. Photo: Shaikat Mojumder

Starting in July of 2012, as part of the Secretary-General’s UNiTE to End Violence against Women Campaign, eight groups of children and youth began efforts to engage their communities through a series of interactive theatre performances. In eight districts across two provinces of southern Bangladesh, community-based civil society organizations selected a total of close to 200 young people aged 8-17to be part of the project, which has directly reached more than 9,000 community members.

Together with UN Women Bangladesh, the organizations trained the young people on age-old an popular street theatre techniques and facilitated in-depth discussions about the prevalence and forms of violence against women that occur in Bangladesh. The groups each then chose a theme related to gender violence that they identified with and developed it into a short dramatic piece for members of their own communities. The goal: to engage more young people in programmes to eliminate violence against women and to change the mindset that such violence is a private or “personal matter” but rather a societal problem. 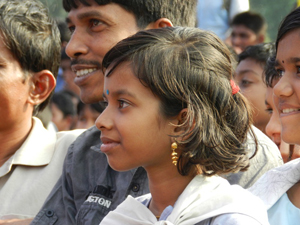 A father and daughter watch an interactive theatre performance in the field at her school in Satkhira, Bangladesh. Photo: UN Women/Mahtabul Hakim

The performances were originally designed to be conventional plays, but then evolved into interactive dramas. After the actors would perform a story representing acts of gender violence, the entire cast would start engaging the audience in a conversation about the events that took place on stage, as well as the acts of violence that regularly take place in the community. The audience is asked: What went wrong here? What would you have done differently? What should have been done? What actions are not acceptable for the peace and progress of society?

After the discussions, the performers then portray a new version of the story with a positive outcome, reflecting the feedback they get from the audience.

The theatre programme tries to bring a shift in attitude that an act of violence against a woman is not only an attack on a woman, but rather as an attack on the entire community in the eight communities it has reached, through urging the audience that they personally have a role to play in preventing violence against women. 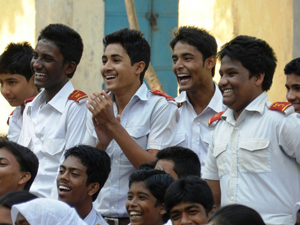 At a theatrical performance in Jessore, Bangladesh, in November 2012, a group of young men applaud as male characters are challenged for committing domestic violence. Photo: UN Women/Mahtabul Hakim

In addition to the performances, the UNiTE campaign has organized several contests to engage young people, such as a nation-wide poster competition for young artists on the theme of ending violence against women. The competition culminated in a three-day exhibition in December, highlighting 30 of the best submissions chosen by a panel of artists and human rights activists. Additionally, there were student debates and essay-writing competitions on the same theme.

The programme in Bangladesh represents one of many creative outreach initiatives designed to engage communities within the Asia-Pacific Region. Other similar projects under the UNiTE campaign include the creation of a music video in the Philippines, a talk show in Indonesia, an art contest in Viet Nam, and a photo contest in India.