Half of men report using violence and a quarter perpetrate rape according to UN survey of 10,000 men in Asia-Pacific

An unprecedented UN study of 10,000 men in Asia and the Pacific, released today, found that, on average, half of those interviewed reported using physical and/or sexual violence against a female partner, ranging from 26 per cent to 80 per cent across nine sites studied in six countries (Bangladesh, Cambodia, China, Indonesia, Sri Lanka and Papua New Guinea). Nearly a quarter of the men interviewed reported raping a woman or girl.

The study, entitled Why Do Some Men Use Violence against Women and How Can We Prevent It? Quantitative Findings from the UN Multi-country Study on Men and Violence in Asia and the Pacific was conducted by Partners for Prevention, a regional joint programme of the UN Development Programme (UNDP), the UN Population Fund (UNFPA), UN Women and United Nations Volunteers (UNV) programme in Asia and the Pacific. It asked men about their use and experiences of violence, gendered attitudes and practices, childhood, sexuality, family life and health. 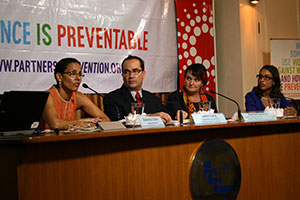 “This study reaffirms that violence against women is preventable, not inevitable,” says James Lang, Programme Coordinator, Partners for Prevention. “Prevention is crucial because of the high prevalence of men’s use of violence found across the study sites and it is achievable because the majority of the factors associated with men’s use of violence can be changed.”

Regarding rape, the study’s key findings were:

To read more, click here for the full press release.

Related News
12/03/2013
Study reveals shocking new evidence of men’s use of violence against women and girls in Asia Pacific
26/03/2013
Bringing drama into the streets: interactive theatre performances counter violence against women in Bangladesh
18/02/2013
Governments, rights advocates and experts from across Asia and the Pacific gather to unify efforts to end violence against women ahead of CSW57
14/11/2018
Young educators in China are questioning gender norms and preventing violence
11/12/2014
Around the world, women and men of all ages “orange their hoods” to end violence
END_OF_DOCUMENT_TOKEN_TO_BE_REPLACED