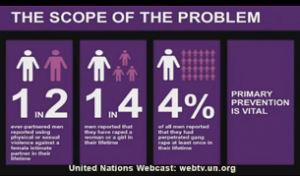 One in two men said they had used physical or sexual violence against an intimate partner, one in four reported having raped a woman and one in 25 admitted to having participated in gang rape.

These are among the shocking preliminary results of a study by a joint UN programme that surveyed more than 10,000 men on their use and experiences of violence against women and girls in nine selected sites across six Asia Pacific countries (Bangladesh, Cambodia, China, Indonesia, Papua New Guinea and Sri Lanka).

The new research was presented at a side event for the 57th Commission on the Status of Women (CSW57) on 8 March, titled “Why do men use violence and how do we stop it? New evidence on men’s use of violence against women and girls and its uses for enhanced prevention,” which was co-sponsored by the Australian Government, Government of Sweden and World Health Organization (WHO).

The preliminary findings stem from a study to be released in July, which will represent the largest cross-country comparable data set on men’s use of violence in Asia-Pacific to date. The men surveyed were asked about their childhoods, relationships, health, sexual practices, gender attitudes and use of violence against women and girls.

A preview of the research was presented by James Lang, the Regional Programme Coordinator of Partners for Prevention, which is administered jointly by four United Nations agencies – UN Women, the UN Development Programme (UNDP), UN Population Fund (UNFPA) and UN Volunteers – all of which presented statements at the side event. In addition to working with national partners on engaging men and boys in programmes that address gender-based violence, the programme seeks to understand the underlying drivers of violence and point to more effective ways to prevent violence from happening in the future.

“To stop violence before it starts we need to understand the root causes of men’s use of violence, why some men are more likely to use different types of violence and also why some men oppose it,” said Lang. He said many of the men who used violence had a sense of entitlement to engage in sex without consent and men who experienced violence or abuse, particularly as children, were twice as likely to perpetuate it themselves.

The study’s preliminary findings also reinforce the need to address gender inequality as an underlying cause of violence. Overall, rates of violence tend to be higher in places where gender inequality is high, where there has been recent or ongoing violent conflict and where families are vulnerable to hunger and other forms of poverty.

Lang noted however that violence is preventable, highlighting the great variation in the percentage of men reporting physical and/or sexual partner violence across the nine study sites, which ranged from 25 per cent to 80 per cent.

“We have evidence that interventions are working,” he said, adding that the key is for governments to use this knowledge to tailor their responses to the pandemic of intimate partner violence.

Following the presentation of the preliminary research findings, a panel of experts discussed the implications and how this knowledge can be applied to enhance prevention programmes and policies.

In his statement for the side event, UN Women Deputy Executive Director John Hendra said that as the report states, although 99 countries today are collecting data on women’s experience of physical and sexual violence, less data is collected from men and boys.

“Such data is imperative for informing interventions related to social norms and behaviour change, and addressing the underlying causes of gender-based violence,” said Mr. Hendra.

Webcast of the CSW side event: Why do men use violence and how do we stop it: new evidence on men’s use of violence against women and girls and its uses for enhanced prevention

The joint UN Women, UNDP, UNFPA and UNV statement is available at: https://www.unwomen.org/2013/03/joint-remarks-from-panel-on-new-evidence-on-mens-use-of-violence-against-women-and-girls-and-its-uses-for-enhanced-prevention/

A recent and unrelated UN Women study in India surveyed more than 1000 men, 51 per cent of which reported having perpetrated sexual harassment or violence against women and girls in public spaces in New Delhi, with 25 per cent saying they had done so in the last six months: https://www.unwomen.org/2013/02/un-women-supported-survey-in-delhi-shows-95-per-cent-of-women-and-girls-feel-unsafe-in-public-spaces/