On the opening day of the two-week long Commission on the Status of Women— the annual gathering where countries agree on frameworks to address critical issues related to gender equality and women’s rights — UN Women Executive Director Michelle Bachelet urged world leaders to live up to their commitments. 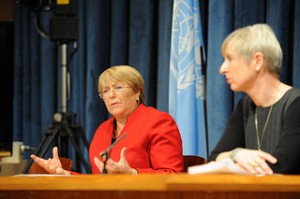 The meeting’s focus this year is on one of the biggest global challenges, ending violence against women and girls, which affects up to seven in 10 women worldwide. Occurring in multiple forms in all countries and settings, it impacts millions of women, and their communities, hampering development, and also costing countries billions of dollars annually in healthcare costs and lost productivity.

“During the past decades, we have made progress in the articulation of international norms and standards, and in national laws and policies,” said Ms. Bachelet, UN Women Executive Director. “But violence against women and girls remains widespread, and impunity is still the norm rather than the exception. Now we must take on the challenge of implementation and accountability,” she added, in her statement at the opening session in the General Assembly Hall.

Political leadership is key to negotiate a global roadmap of actions to prevent and end this violence. Therefore, in the lead-up to the Commission, UN Women in November launched its COMMIT initiative which calls on Governments to commit to new, concrete national actions to end this scourge. Some 41 Governments have pledged new commitments as of now, with more expected in the next weeks.

Commitments range from efforts for prevention, protection and justice, such as more effective laws and national strategies, stronger prosecution of violence cases, advocacy campaigns targeted to young people and men, training of civil servants to detect violence cases, and expanded public services, such as shelters.

All these efforts are essential. Ending violence against women requires multi-pronged strategies including: implementing laws and policy reforms; ensuring women and girls can fully exercise their human rights, including their right to sexual and reproductive health and reproductive rights. It needs changes in attitude and behaviours that endorse violence through community mobilization and educational programmes. It needs building the capacity of institutions and service providers and the involvement of men and boys in building violence-free communities.

Expectations are high for the Commission on the Status of Women, which follows recent world events and protests that testify to the growing awareness and momentum to comprehensively address the pandemic. An unprecedented 6,000 representatives of civil society are registered to attend the UN meeting this year.

Today, 187 countries have ratified the Convention on the Elimination of all Forms of Discrimination against Women. The UN Security Council now recognizes sexual violence as a deliberate tactic of war. More than 125 countries have specific laws that penalize domestic violence, a historic number compared to a decade ago. Yet 603 million women still live in countries where domestic violence is still not a crime. Implementation and enforcement of laws, in countries where they do exist, are uneven.

At the Commission, UN Women urges Member States to strengthen global norms and standards; and increase political commitment and action to end the pandemic, believing strongly that violence against women is not inevitable. It is possible to end this pandemic through determined leadership for prevention, protection and provision of services for survivors.

During the first week of the Commission on the Status of Women, International Women’s Day will also be commemorated at an event on 8 March at UN Headquarters.