In Ethiopia, impoverished women are earning an income, developing new skills, and starting collective savings thanks to a nation-wide economic empowerment programme benefitting approximately 10,000 women in the Ethiopian countryside.

“I didn’t know whether I would have work from day-to-day. In a good week I earned 20 Ethiopian Birr (around 1 USD). It was not even enough to buy food for my son,” Mentamer says, watching over her seven-year-old boy, Abraham, as he plays with a toy car, home-made out of wire. 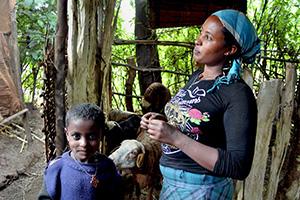 Mentamer and her son Abraham care for their sheep.

When Mentamer’s mother died, she was left homeless and lived on the streets of Tilili, a small town in northern Ethiopia, not far from Lake Tana, the source of the Blue Nile. After giving birth to her son, she took up work as a day labourer in order to feed him. She was making injera, the traditional Ethiopian bread and local alcoholic beverages that she sold on the street. Balancing insecure employment, variable daily income, and the demands of life as a single mother with no one to help her was “difficult,” to say the least.

Mentamer was one of the estimated 25 million people living in poverty in Ethiopia. Of the 187 countries profiled by the United Nations Development Programme’s Human Development Index, Ethiopia ranks 174th[1]. Despite strong economic growth, ranging from 8.8 to 12.6 per cent over the past three years[2], almost a third of the rural population face poverty[3].

In 2011, the Ethiopia Joint Programme on Gender Equality and Women’s Empowerment, led by UN Women and the UN Population Fund, was initiated in the town of Tilili. The country-wide programme has four components: women’s economic empowerment, supporting women’s leadership, mainstreaming gender in federal and local level governments and ending violence against women and girls.

As one of the most impoverished members of her community, Mentamer qualified for the programme, and in March 2012, she successfully applied for a loan of 4,000 Ethiopian Birr (215 USD). The programme provided a six-day training course in business administration, vegetable farming, and livestock care.

Mentamer used the money she borrowed to buy two lambs, and the course gave her the skills she needed to grow and process food and raise healthy animals. After three months, she sold the lambs and made a profit of 800 Ethiopian birr (43 USD). Mentamer has continued to develop her business, and today, one year on, she has six sheep in the backyard of her hut, and has made a profit every three months since she first bought the lambs.

She now earns a regular income, but that isn’t the only way Mentamer’s life has changed over the past twelve months. She has also joined a women’s group that practises collective savings, discusses social issues and problems within the community, and cultivates potatoes collectively on a shared plot provided by the Government. She is the chairperson of the group and at their monthly meetings is in charge of collecting contributions from all the members and keeping the records. Mentamer and the other women in the group take turns using the savings for their businesses. 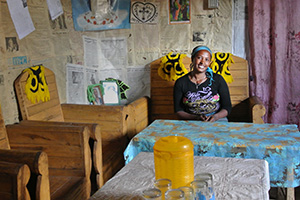 Mentamer sits in her home, on her newly bought furniture.

“The benefit of working together in a group is that we share experiences with each other. If one member is successful in her business, she helps others,” says Mentamer, with great pride.

Twelve months into the programme, Mentamer is a respected member of the community, has a newly built hut and also something she could only dream of a year ago: furniture. It took many months of saving and she is now proud to show her home to guests.

“But the biggest change … is that my son and I can now afford to eat all our meals,” Mentamer says.

[1]UNDP in Ethiopia, 2012
[2]According to the UN’s World Economic Situation and Prospects 2013, Ethiopia’s GDP was 8.8% in 2009, 12.6% in 2010 and 11.2% in 2011.
[3]Ministry of Finance and Economic Development, Federal Democratic Republic of Ethiopia
Related News
08/03/2013
The Knowledge Gateway to help entrepreneurs, workers and experts network and share information
01/08/2018
Women’s cooperatives boost agriculture and savings in rural Ethiopia
30/08/2017
Women entrepreneurs in Ethiopia lead the way from poverty to empowerment
13/10/2016
Stepping out of the Boma: Maasai women of Tanzania take charge of their own lives and livelihood
23/09/2013
Global Knowledge platform launched to galvanize women’s economic empowerment
END_OF_DOCUMENT_TOKEN_TO_BE_REPLACED