Stepping out of the Boma: Maasai women of Tanzania take charge of their own lives and livelihood

Villages at the foothills of Mt. Longido, one hour north of Arusha, Tanzania, have been the home of the Maasai for generations. The Maasai are semi-nomadic ethnic group that live in northern Tanzania and have the highest rates of child marriage, female genital mutilation (FGM), illiteracy and poverty among women in the country. Most women are self-employed in the informal sector, and have seasonal sources of income. 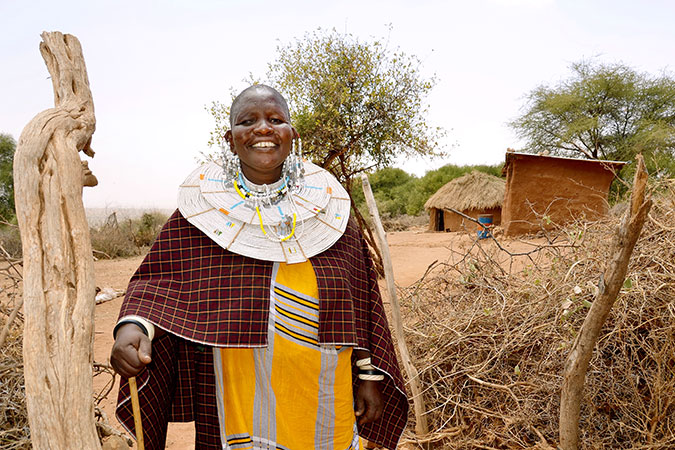 Mama Neema stands at the entrance of her traditional boma (homestead) where she built three houses for her family in Kimokouwa village in Arusha, Tanzania. Photo: UN Women/Deepika Nath

“Many Maasai women had never left their villages before our trainings,” says Ndinini Kimesera Sikar, the co-founder and director of Maasai Women’s Development Organization (MWEDO), an organization providing trainings on entrepreneurship, business formalization and land rights, with the support of UN Women. “Now they have passports and all the legal paperwork to travel and trade across the border,” she continues. “It’s a huge achievement for women who were never allowed to even go to school.”

In the small village of Mamura, over 50 Maasai women and girls have gathered under an acacia tree for their monthly savings group meeting. Mama Nalepo Olesein, 48, is one of the chairpersons of the village savings group.

In 2007, Mama Nalepo enrolled in an adult literacy programme, where she first learnt foundational skills like reading, writing, and arithmetic. Most recently, she took part in UN Women-supported trainings on managing accounts, record-keeping and business development, which helped her take over her husband’s shop and revamp the business model. Through cross-border trading, she made a profit of over US$ 500 per month, which allowed her to expand her business, send her last four children to school and purchase 12 plots of land. 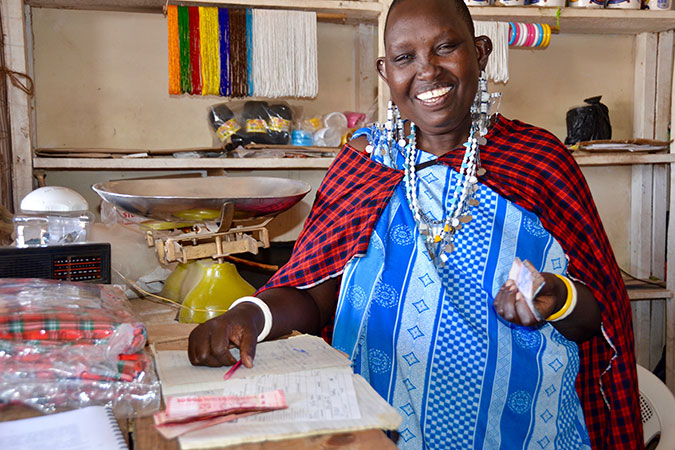 Mama Nalepo in her shop in the local market of Mamura village in Arusha, Tanzania. Photo: UN Women/Deepika Nath

“The trainings gave our women the confidence to step out of their boma (homestead) and earn like men,” says Mama Nalepo. “The future of my children and grandchildren is secure, because I received the knowledge I needed to make profit from my business.” Mama Nalepo now encourages other women in nearby villages to participate in the trainings.

Deeper into the savannah, in the village of Kimokouwa, another group of women gathered to share their stories of empowerment. Mama Neema Olenriya, 42, chairperson of the village council, speaks of her 20-year struggle to acquire land.

“For generations, only men were allowed to own and inherit land, so they question whether women are fit to be land owners,” says Mama Neema. “But I am also Maasai—I can also fight for my rights,” she adds.

Mama Neema received trainings on land and property rights, which gave her the confidence to demand village authorities for a plot of land that was rightfully hers.

“This is my land now; I can show you all the paperwork,” says Mama Neema as she points to her plot, where she has built three houses for her family of seven. She uses her knowledge from the trainings and personal experience to help other women acquire land, and is also working with a smaller group of women to set up a shop to sell vegetables, milk and ethnic jewelry at the local market. 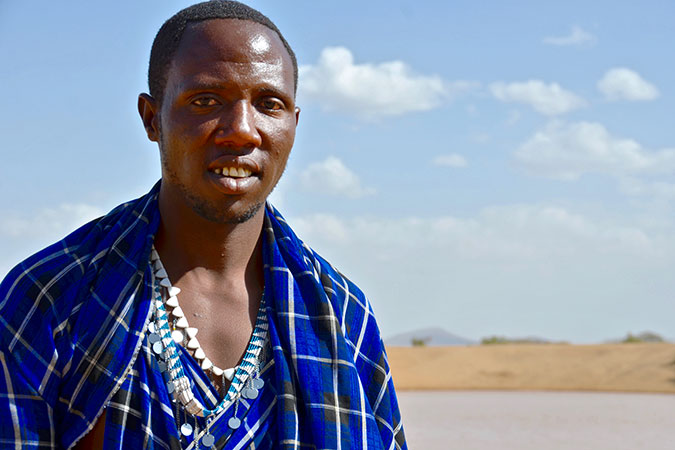 Coordinating these trainings are young men like Samwel Simanga, 27, who had the opportunity to attend primary school and are now working as facilitators and translators. Fearful of women advancing ahead of men, many of Simanga’s friends have discouraged him from helping women become financial independent. But he disagrees. “Women who know their rights and are educated don’t need men to financially support them,” says Simanga, who is the sole breadwinner of his extended family of thirteen. “When women have equal power in the household, we all benefit.”

While some men in his village still ridicule Simanga’s efforts to help women, others have confided in him that they appreciate the additional income from the women’s small businesses.

Between 2011 and 2016, the UN Women-MWEDO partnership has empowered hundreds of Maasai women to acquire land, find additional employment and diversify their economic activities to supplement their families’ income. The most recent trainings were provided as part of UN Women’s 2016 programme on “Women’s Access to Income, Land and Rights”, supported by the Government of Sweden through the One Fund in Tanzania.

Related News
12/09/2019
From Tanzania to Algeria, rural women are taking charge of their lives and livelihoods
11/07/2019
Ask an activist: Why are women lacking land rights in Tanzania and what can be done about it?
23/04/2013
New Horizons: Ethiopian women join efforts to escape poverty
01/02/2019
From where I stand: “I want to get involved in decision making in my community”
01/08/2018
Women’s cooperatives boost agriculture and savings in rural Ethiopia
END_OF_DOCUMENT_TOKEN_TO_BE_REPLACED