With some electoral gains in Iraq, women candidates work towards change

To run as a political candidate in Iraq demands courage and determination – even more so for a woman.

Fourteen candidates, including one woman, were murdered in the run-up to local elections held in April – the first elections to be run by the Iraqis themselves without any international help since 2003.

Maryam Abdulla, 31, was recently elected to the regional council in Kut, southern Iraq. She is proud of her success and pleased that training from UN Women helped her achieve more votes than predicted. 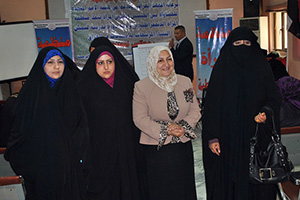 Women candidates and their election trainer following a recent training in Kut. Pictured from left to right: Sanaa Isaa, candidate from the Iraq of Wealth and Giving coalition; Radhiea Ali Salim, candidate of the Gathering of Loyal Hands party; Sanaa Al-Taai, trainer; and Sajida Nezer, Al-Ahraar coalition. Sajida Nezer won her seat with a total of 1,495 votes. Photo courtesy of the Iraq Foundation

“The training provided by UN Women to us as women candidates was a good and positive step to broaden the women’s culture. We as women need to work more, especially in the south of Iraq where we have to break through the tribal layer. We need more training to be able to change people’s attitudes,” said Maryam, sounding sprightly and positive despite the obstacles she faced.

Maryam is one of approximately 300 women candidates from five governorates who were trained by the Iraq Foundation and their local partners in the run-up to the local elections in Iraq on 20 April. Supported by UN Women, the three- to five-day sessions covered issues like dealing with the press, how to put together a campaign, presentation techniques and self-management. All political parties were asked to nominate their women candidates for training, but not all did.

“Today women face more challenges. I’m always asked by other women how did I break through the tribal layer, my answer to them is it was possible through dialogue and improving myself to convince them that I understand women issues and I can be a leader,” said Maryam.

According to the UN’s Women in Iraq factsheet, women “represent one of the most vulnerable segments of the population and are generally more exposed to poverty and food insecurity as a result of lower overall income levels.”

Despite the large peak in violence in the run up to the elections, election day itself passed off without incident; approximately 50 per cent of the population turned out to vote, of which 40 per cent were women. 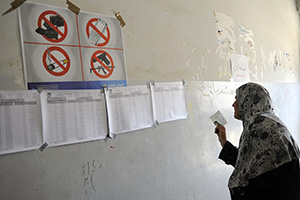 A voter searches for her polling station location during Iraq’s last parliamentary elections, on 7 March, 2010. Photo credit: UN Photo/Rick Bajornas
The initial results for women in Iraq are mixed. There will be two fewer women on the Wasit regional council than in 2009 and there will be fewer women in Baghdad too. However, other councils have seen an increase in women’s representation.

Zahra Al-Bajari was elected for a second time as a council member in Basra, southeastern Iraq. Nine women won seats out of 35, which is an increase in the number of women elected since the last elections.

“I recently observed a phenomenon where in some communities they only wanted to cast their votes to women because they believe that women take their work seriously and are usually characterized by integrity and want to prove their presence more through hard work,” said Zahra. “So they decided to cast their votes to women because according to their beliefs men don’t work but for their own interest.”

But she added that the elections in Iraq and in Basra in particular are challenging for women, especially since tribes are headed by men that represent clans, and a clan can’t be represented by a woman.

In Iraq, women are guaranteed a minimum of 25 per cent of seats in Parliament due to a quota law introduced in 2005. While the law does not apply at the local level, in the run-up to the recent regional elections, the Iraqi High Electoral Commission passed a decree ensuring that at least 25 per cent of the representatives on every regional council would be women. In 2009, approximately 25 per cent of seats in local councils were occupied by women. Initial results from the recent elections suggest there will be a slight increase to 26 per cent.

As recently as 2012, according to the Inter-Parliamentary Union (IPU), Arab States had the lowest average proportion of women in Parliament in any region of the world, with only 10.7 per cent of women in lower and upper houses combined. But representation of women is slowly improving, as recent election results in Algeria and Tunisia have helped change what was once a dismal picture. As of April 2013, female parliamentary representation in Arab States had reached 13.8 per cent, still the lowest in the world, but improving.

For the time being, the women elected to the regional councils in Iraq are rejoicing in their victories and looking forward to their new responsibilities.

“Political participation is an area where women can make a profound impact on decision-making in Iraq,” said Frances Guy, UN Women Representative in Iraq. “The power of 81 women MPs in Parliament is significant if they could find better ways of working together on key issues of concern to women. UN Women will continue to work with those recently elected and those who have been in power for longer to improve the role of women in politics in Iraq.”

She said UN Women Iraq will seek to mentor and coach all successful women candidates and fund further training through the Iraq Foundation for women running for seats in the Kurdish regional parliamentary elections to be held in September.