European Union Ministers of Justice agreed today at the Council of the European Union to pioneer a Europe-wide protection order for survivors of violence.

The new regulation complements the ‘European protection order’ adopted in December 2011, extending its application from criminal to civil matters. It will guarantee that victims and survivors of domestic violence can rely on restraint or protection orders issued against the perpetrator in their own country when they travel or move to another EU country. 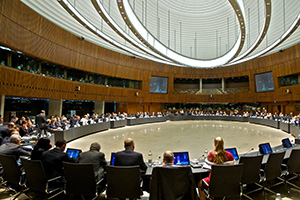 Regulations are the most direct form of EU law – as soon as they are passed, they have binding legal force throughout every Member State, on a par with national laws. This ‘European protection order’ will accompany the range of recent criminal and civil justice and legislative measures to crack down on human trafficking, sexual abuse and sexual exploitation of children, and to strengthen the rights, support and protection of victims of crime.

With the adoption of this regulation, the EU fulfills one of its pledges under the COMMIT initiative, launched by UN Women in 2013 in the lead up to the 57th Commission on the Status of Women as a call to Governments around the world to take concrete steps to end violence against women and girls. In addition to the European Union’s own commitment, to date, 57 countries have joined the initiative so far, 16 of them EU Member States.[1]

This European Protection Order is the result of the legislative package on victims’ rights adopted by the European Commission on 18 May 2011 and is also guided by the European Commission’s Strategy for Equality between Women and Men 2010-2015, which includes ending gender-based violence among its priorities. According to data quoted in this strategy, 20 to 25 per cent of women living in the EU have suffered physical violence at least once during their lives, with intimate partner violence as the most common form experienced.

UN Women is actively engaged in policy dialogue with the European Union and has supported a number of processes to address violence against women. This collaboration is cemented under a partnership agreement between the EU and UN Women, signed in 2012, to enhance gender equality and combat sexual and gender-based violence. Specifically, the partnership includes a commitment to provide more support and protection to survivors of violence, and increase access to justice and services for those women affected. The partnership also aims to fight impunity for perpetrators of gender-based violence.

Data from the Progress of the World’s Women 2011–2012: In Pursuit of Justice shows that , in a cross-section of European countries, only an average of 14 per cent of rape cases end in convictions of perpetrators.

In May 2011, the Council of Europe (comprising 47 countries in Europe) adopted the Istanbul Convention, which will enter into force when at least 10 Council of Europe Member States have ratified it. Four countries have done so to date [Turkey, Albania, Montenegro and Portugal] while another 14 have committed to do so in 2013, as part of the COMMIT initiative.[2]

The Istanbul Convention: Strengthening the response to ending violence against women