In Sub-Saharan Africa, AIDS widows strive to regain their rights after husbands are gone

“After the death of my husband, my neighbour harassed me through insults and threats to harm me and my family. But the worst was when he let his cows into my farm and destroyed all my crops. I was left with nothing to feed my children since I’m not employed and I have no other source of income,” recalls Florence*, a 34-year-old farmer and mother of three from Kitui Country which lies south-east of Kenya’s capital city, Nairobi. “I had lost everything and they kept telling me I had no ‘one’ (meaning a man) to fight for my rights.”

Florence’s story is a common one, a reality for many widowed women around the world, and especially those who have lost their husbands to AIDS. Many of them are living with HIV themselves but can’t disclose their status for fear of being blamed as the original carrier, and the cause of their husband’s death. Living with HIV also magnifies the violations they face in terms of property and inheritance rights, with profound implications for their safety and that of their children, as well as their ability to seek treatment, care and support.

Nearly half of all people living with HIV are women, and in affected regions such as sub-Saharan Africa, that proportion climbs to about 60 per cent. The impact of the AIDS epidemic on women and girls is intensified by their physiological susceptibility to HIV and unequal power relations between men and women. Rape and sexual assault also propel infections among women. 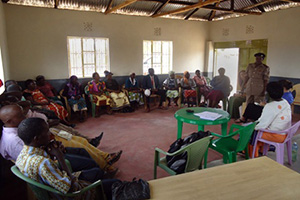 In responding to the HIV epidemic, UN Women, with support from the Canadian International Development Agency, works to empower women living with HIV as leaders and active agents of change, as well as to prevent violence against women (ranging from physical to economic violations). UN Women works with diverse community-based grassroots partners, such as the Coalition des Organisations Non Gouvernementales et des Organisations Communautaires de Base du Cameroun Œuvrant dans le Domaine des Établissements Humains (CONGEH) in Cameroon, and GROOTS International in Kenya, which are on the frontlines of safeguarding women’s property and inheritance rights in the context of HIV and AIDS.

Both organizations work with customary, local and traditional authorities who are influential leaders in many communities. They can also be the propellers of change and effective implementation of laws and lead in altering mind-sets and awareness levels of society.

“CONGEH was born from the need to support women in general, and those living with HIV, who were discriminated against and denied their rights to access land and housing. [HIV] makes it difficult for them to get medical and psychological support because of their economic insecurity, stigma and rejection, while impacting their economic situation, especially for women who derive their means of survival from the land,” says Eliane Sylvie Bouba, CONGEH Programme and Projects Coordinator since 2008. The organization works with women to strengthen and protect women’s property and inheritance rights, providing HIV-affected women with legal services and resources.

In Kenya, GROOTS works with “Watch Dog Groups” that monitor and guard against property-stripping, engaging traditional and customary leaders to address harmful cultural practices that deter access and ownership of land by widows and orphans. 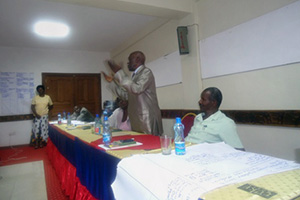 Tom Onyach, of the Luo Council of Elders, speaks at a workshop where community elders drafted a community cultural practice guidebook in an effort to emphasize the role of customary law in fighting disinheritance among widows. Photo courtesy of GROOTS International

“We have a mandate to go out to talk to families and communities, to tell them that the good cultural practices should remain as they are, but the culture which endangers the future of children in a home and harms widows is very wrong and we cannot maintain it,” says Tom Onyach, a member of the Luo Council of Elders, in Kenya.

The organization also builds the capacity of women living with HIV, especially on women’s rights to land and property rights under Kenya’s new Constitution and other legal provisions to build women’s capacity and legal awareness to pursue their rights.

“As the new constitution of Kenya states, every person has rights. In the case of married women, they have rights to inherit the properties of the husband. We [even] go as far as going to the administration in case some people are difficult and they don’t listen we take them to court” adds Onyach.

While efforts are ongoing, some battles are already being won.

“GROOTS helped me get my neighbour to stop destroying my crops,” says Florence. “His son and two village elders came to inspect my farm with a view of compensating me. I did not want to make him pay; I just wanted him to stop destroying my crops but the elders insisted that he pay me. GROOTS was really patient and kept encouraging me as I fought the case with my neighbour. I know they have helped other women, not just in my community, but also in neighbouring areas.”

Related News
30/05/2013
Lakshmi Puri: “Gender inequalities affect health outcomes and must be addressed accordingly”
30/11/2022
Statement: For HIV progress – listen, respect, and respond to young women and girls
21/02/2020
I am Generation Equality: Nicholas Niwagaba, young leader, human rights advocate
01/12/2015
Statement by UN Women Executive Director Phumzile Mlambo-Ngcuka for World AIDS Day
03/12/2013
“We must put women and their rights at the centre of the response to violence against women” – Phumzile Mlambo-Ngcuka
END_OF_DOCUMENT_TOKEN_TO_BE_REPLACED