UN Women is working with partners around the world on a variety of programmes to raise awareness of widows’ rights and legal entitlements, and provide skills and support for their economic empowerment.

In her message for International Widows’ Day, UN Women Acting Head and Deputy Executive Director Lakshmi Puri, calls on the international community to end discrimination against widows so they can live in dignity and fully participate in society. Ms. Puri draws attention to the estimated 115 million widows currently living under the poverty line, and the 81 million who are subjected to physical abuse, often by their own family members. Read more»

Speaking at the International Widows’ Day Conference at the House of Lords in London, England, on 24 June 2013, Acting Head Lakshmi Puri said UN Women works with widows to rebuild their lives and to demand equal rights, equal opportunities, and equal participation in society. Read more »

In Sub-Saharan Africa, AIDS widows strive to regain their rights after husbands are gone

AIDS widows face economic and social exclusion and, for many, living with HIV adds to their vulnerability and stigmatization. UN Women is working with community groups and traditional leaders to empower widows, protect their property and inheritance rights, and provide essential services. Read more »

Socially-excluded widows mobilize for their rights

Along with partners, UN Women is working on initiatives to support widows in Guatemala, India and Malawi. To mark International Widows Day, a look at the work that is currently underway. Read more » 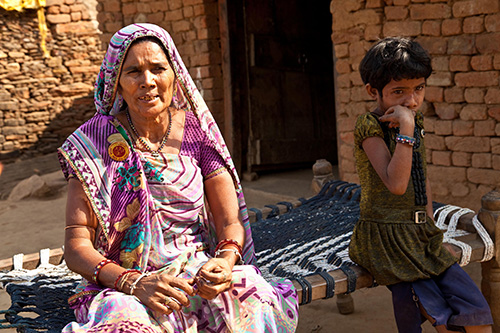 When Duli Bai sits outside her home in the rural Dungapur district of India’s northwest state of Rajasthan, she is acting in defiance of cultural expectations. She is a widow, and like other women who have lost their husbands – often because of staggering age gaps, since they were still girls when they were married to much older men – she faces a range of discrimination and stigma that can limit her personal choices and access to public services.

Married at 12, she has now been a widow for 14 years. She decided to take life into her own hands after she was locked in her house for nine months following her husband’s death. 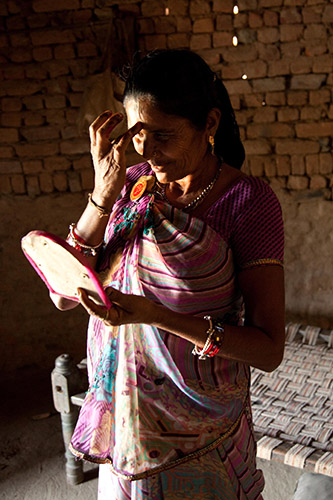 Among Duli Bai’s symbolic acts of rebellion against the social stereotypes that dictate how widows should live are dressing in coloured saris and wearing a bindi (decorative mark on forehead), both traditional signs of marriage. Through these choices, she hopes to show the world that widows can live a life with dignity and respect. 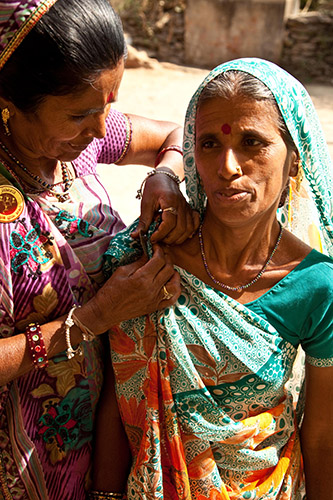 Today, Duli Bai works with local NGO and UN Women partner Aastha Sansthan (meaning Self-Help Group) to support other widows facing the same “triple burden” of cultural stigma, structural barriers in accessing resources and vulnerability to sexual abuse and exploitation. She helps Amir Yadav prepare to visit other widows in their community as part of their work to reduce social ostracism and encourage them to join support groups.

When Amir Yadav’s husband died 15 years ago, she was severely beaten up and abandoned by her in-laws. After working with Aastha Sansthan for the past 13 years, she now has her own house and lives a dignified life in the same village. 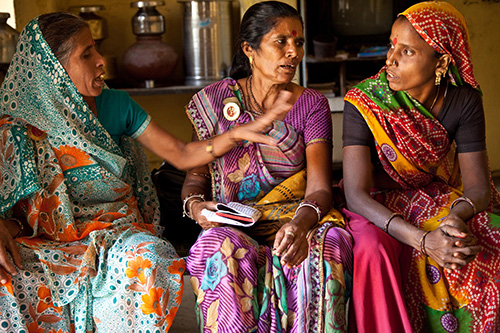 Amir Yadav and Duli Bai speak with other members of Ekal Nari Shakti Sangathan (meaning Empowered Single Women’s Organization), a network of single women that is part of Aastha Sansthan and works towards securing the right of widows to live with dignity and justice. The two women also meet with other widows in their community to encourage them to become members of Ekal Nari Shakti Sangathan. 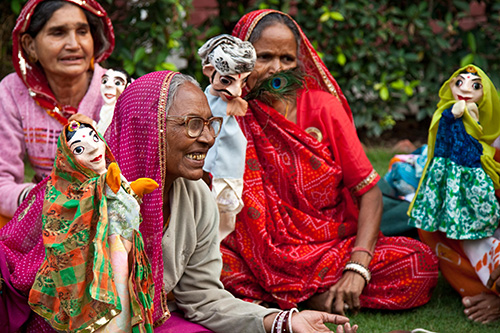 Supported by UN Women, Ekal Nari Shakti Sangathan organized a workshop for a group of 16 widows from Ajmer in Rajasthan who were trained in puppetry, a traditional stronghold of men. The puppetry has provided these women with a livelihood, and, to date, the group has performed eight times in a number of communities, using wood and papier-mâché puppets that they designed and made themselves. 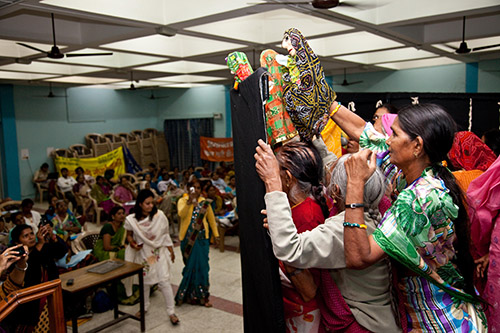 In addition to learning how to make their own puppets, all 16 widows were actively involved in writing the script for their first puppet shows, and performing it to raise awareness about domestic violence and the insensitivity of policemen towards victims at the National Forum for Single Women’s Rights in November 2012. 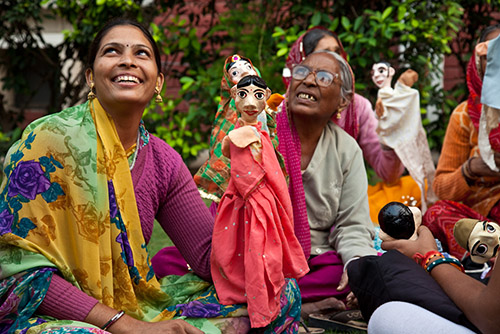 Sita, who at 30 is one of the group’s younger widows, recalled that after her husband died in an accident, her in-laws treated her badly. “When I decided to start work at the local school they called me a prostitute. They said that I was having an affair because I continued to wear a bindi,” she said. While participating in the puppetry training, she encouraged other women in similar situations: “Be strong!”

Through its “Empowerment of Widows and their Coalitions” programme, UN Women supports 1,500 widows in India, Nepal and Sri Lanka. Recently, with the help of the Loomba Foundation and the Swiss National Committee, special focus was given to empowering 500 widows in the town of Vrindavan and the Udaipur district.

All photos by Gaganjit Singh for UN Women

Join the conversation on Twitter through the hashtag #WidowsDay! Follow the live tweeting by @TheLoombaFndtn from the event organized by UN Women and The Loomba Foundation in London on Monday, 24 June at 10:30am-12:00pm (UK time) to commemorate the day. At the same time (4:30pm IST), follow our #AskUNWomenIndia Twitter chat with widow Savita Ma about the challenges faced by widows in India.