Socially-excluded widows mobilize for their rights

After 40-year-old Santosh Kumari lost her husband a year ago, life was never the same. A mother of three, Santosh was constantly being harassed by her in-laws and denied her share in the family farm in Vrindavan, northern India. Her elder son works as a labourer, but that income is not enough for the family as she struggles to send two children to school. 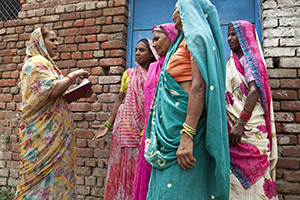 Savita Sharma, one of six human rights defenders trained by UN Women, speaks to widows on 17 June, 2013 in Vrindavan, India. Thanks to her work, 62 widows recently received their widows’ pension.

Things only started to look up when she was informed about a pension plan for widows by Savita Sharma, a widow herself who was trained as a human rights defender as part of a UN Women programme. Supported by the Guild for Service Foundation, Astha Sansthan (meaning Self-Helf Group), the Swiss National Committee and the Loomba Foundation, the two-year-old programme is reaching more than 500 widows in the town of Vrindavan and the district of Udaipur in northwestern India.

Today, Santosh is busy getting the paper-work ready to receive the pension, with assistance from Savita. At least 50 other widows are also applying for pensions.

“The defenders are part of the overall strategy for the programme that aims to reduce stigma, create awareness about their situation, increase their access to services, and provide them with better livelihoods. The programme has helped to bring coalitions of widows to the fore, so they can demand their rights,” says Sushma Kapoor, Officer-in-Charge, UN Women India.

In Udaipur, in the state of Rajasthan, over 1400 participants have been reached through 300 Gram Panchayat (village government councils) meetings as well as block-level meetings which gave widows an opportunity to raise issues that restrict their access to resources and services. More than 250 widows have attended also workshops on health services, HIV/AIDS, food security, laws concerning women, and on coalition-building and networking.

In western India’s city of Ajmer, widows have also been taught the art of puppetry – traditionally the stronghold of men – which has provided them with a livelihood.

“Before we learnt puppetry, we couldn’t express ourselves very well; but now we stand behind the curtain and say everything we have to say,” says 35-year-old puppeteer Mamta. “The discrimination between son and daughter, sarpanchs [village heads] who do not work, and violence against women are some of the themes that have been taken up by my team.”

Announcing support to UN Women, in November 2012, the Loomba Foundation (a UK-based charitable organization) decided to support the work with socially-excluded widows already underway in India by expanding it to promote the human rights and economic empowerment of widows through global advocacy and programmes in three countries: India, Guatemala and Malawi. 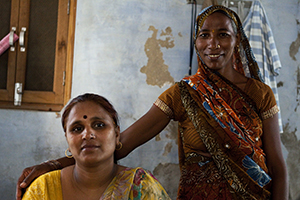 Through this collaboration, in India UN Women and the Loomba Foundation are implementing a three-year programme to empower widows and their coalitions. It fosters efforts to enable widows to become agents of change, to eliminate the stigma, discrimination and marginalisation they face, to be able to shape their own futures and to access their rights.

Loomba-sponsored programmes in Guatemala are working with widowed survivors of the country’s 36-year internal armed conflict, most of whom were abducted or forced into slavery to provide food and sexual services to the military. The project will collect data about the conditions and needs of these women, as well as provide psychosocial counselling and human rights training on the national penal law against femicide and international instruments, to help organize and mobilize widows to demand their rights.

The programme also aims to increase conflict-affected widows’ access to justice and their role in implementing peace agreements; achieve gender-sensitive reforms of Guatemala’s security and justice system; and implement prevention and protection mechanisms against systematic rape and violence against women (including recognition of the continuum of sexual violence from the internal armed conflict to the present post-conflict situation).

In Malawi, programmes include a partnership with the Malawi Red Cross Society, to improve the living conditions of widows in Dzaleka refugee camp and reduce gender-based violence by economically empowering households headed by widows, supporting them with business start-up funds, including the purchase and distribution of raw materials. Using theatre to raise awareness of gender-based violence in the camp is also part of the plans.

The Malawi project also includes business management training courses for widows and abandoned women recuperating from fistula; collaboration with the women’s rights NGO Women and Law in Southern Africa to raise awareness on the human rights of widows, especially those who have suffered property-grabbing or land dispossession; and national consultations on alternative economic livelihoods for widows.