On the occasion of World Refugee Day, UN Women today launched a new programme and released the findings of a new report on gender-based violence among Syrian refugees in Jordan. The report finds that rates of early marriage are strikingly high (more than one half of women were married as children), that restrictions on the mobility of women and girls limit their access to work and aid supplies, and that 83 per cent of Syrian refugees are unaware of services for survivors of violence, which are now limited.

The report, led by UN Women in partnership with the Jordanian Hashemite Fund for Human Development and The Queen Zein Al-Sharaf Institute for Development (JOHUD/ ZENID), was commissioned by a joint UN task force, which also includes the UN Refugee Agency (UNHCR), the United Nations Population Fund (UNFPA) and the United Nations Children’s Fund (UNICEF), in addition to partner organizations Save the Children International, the International Rescue Committee, the Jordanian Women’s Union, and Un Ponte Per (UPP). 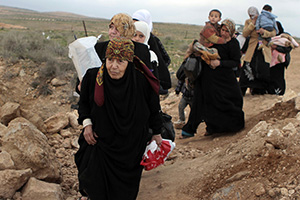 According to UNHCR, more than 1.6 million Syrians have fled the country’s civil unrest since March 2011 and sought shelter in neighbouring countries, including 472,764 in Jordan (as of 3 June 2013) – a number that is expected to double by year’s end.

Since humanitarian relief was initially directed towards refugees based in the Za’atri refugee camp (now home to more than 100,000), UN Women decided to focus the assessment on other communities, where two-thirds of Syrian refugees are currently residing. It targeted urban refugees living in 11 out of Jordan’s 12 governorates (provinces). The findings are based on data collected through questionnaires distributed to 613 refugees including women, girls, boys and men from different households; 34 focus group discussions held in all regions; and 45 in-depth interviews with key informants, community leaders and service providers from all regions.

The report finds widespread child marriage – more than 33 per cent of all participants (women and men) were married when they were still children – but the rate of early marriage among Syrian refugee women and girls is 51.3 per cent. Half of all respondents believed that the normal age of marriage for girls is under 18. Many also perceived that the marrying age has further decreased since their displacement to Jordan, as impoverished refugee families seek dowries and one less mouth to feed.

Findings indicate that Syrian refugee women also face major challenges in accessing basic resources and specialized services due to their restricted ability to leave home without a male family member. This makes it harder for women to engage in economic activities, receive education, participate in social activities, or receive aid supplies. One-fifth of girls never even go outside their homes in Syria and displacement has made it even less likely.

The report concludes that the longer the situation of displacement is prolonged, the greater the likelihood of higher rates of child labour for boys and early marriage for girls. 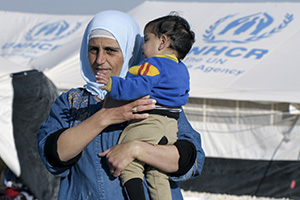 A woman and child at the Za’atri refugee camp, which hosts an estimated 100,000 Syrians displaced by conflict, near Mafraq, Jordan.

The study also reveals the lack of specialized and confidential services available to Syrian women and children who are survivors of gender-based violence, such as psychosocial counseling and legal support, and a lack of knowledge about such services even when available, with an overwhelming 83 per cent of Syrian refugees unaware of any services for survivors in their community.

“We both hope and believe that this [report] has revealed a 360-degree picture of where and why necessary services and information have failed to effectively reach their target audiences,” says Dr. Sameera Al-Tuwaijri, UN Women Regional Director for the Arab States, adding that she hopes it “will fuel our collaborative efforts towards meaningful gender equality in humanitarian action.”

To respond to the lack of services, a new joint programme is being launched today at an event in the refugee community of Zarqa, northeast of Amman. To be implemented by UN Women, UNFPA and UNICEF, in partnership with Jordan’s Ministry of Social Development (MOSD), Ministry of Health (MOH), Family Protection Department (FPD), and other relevant NGOs, the project aims to increase survivors’ access to comprehensive, life-saving protection including health, psychosocial and legal services in three areas in Jordan (Mafraq, Irbid and Zarqa). It will include access to shelters, legal aid and case management, as well as to quality health services, including reproductive health services adapted to age and gender.

The study and this new project build on UN Women’s work with Syrian refugees in Jordan, including economic empowerment and protection initiatives which began in January of this year and are already reaching some 3,000 women and children. They include sexual and gender-based violence protection, information and psycho-social activities such as an abuse hotline which has been used by at least 2009 Syrian refugees, health-awareness sessions attended by 216 women in Madaba, Al-Hussein and Hittin Camps, and recreational activities involving 276 children.

UN Women is also supporting vocational training and income-generating activities for urban Syrian refugee women in the Al-Hussein, Der-Allah, Hittin and Irbid camps, where at least 186 women have attended training courses in skills as diverse as computers, to soap-making and hair-dressing. Another 300 women at the Za’atari refugee camp have taken part in tailoring workshops and a cash-for-work programme to sew baby outfits for new mothers at camp hospitals.

Since September 2012, UN Women has also been part of a Regional Response Plan, which now involves 13 UN agencies and 17 NGO’s and international organizations in the region. UN Women is an active member of the Gender-Based Violence Working Group and has a dedicated Adviser working to ensure gender equality is mainstreamed across humanitarian sectors. 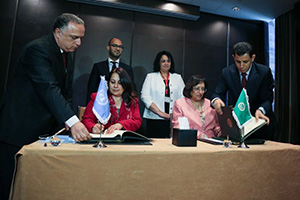 Dr. Sameera Al Tuwaijri, Regional Director of UN Women Regional Office for Arab States (left), and Ambassador Faeqa Al Saleh, on behalf of the Secretary General of the League of Arab States (right), sign the Memorandum of Understanding for a joint partnership in areas of common interest. Photo courtesy of wupy.org
vAs part of the UN Women Regional Office for Arab States’ cooperation with the League of Arab States, a strategy for women, peace and security was also recently developed and launched in May, in line with Security Council Resolution 1325, which calls for women’s engagement in conflict resolution and peacebuilding. The strategy will serve as both a protection and empowerment tool, focusing on prevention, participation, protection, relief and recovery.

Related News
16/04/2013
Syrian Women Refugees Stitch Together Trust and Hope
21/01/2019
In the words of Nur Omar: “I’ve healed the wounds of war and feel more confident about my future”
21/12/2017
Press release: European Union–UN Women partnership bolsters efforts in response to Syrian crisis
03/05/2016
A snapshot of UN Women’s work in response to the crisis in Syria
13/01/2016
UN Women assesses the needs of women migrants and refugees in Serbia and fYR Macedonia
END_OF_DOCUMENT_TOKEN_TO_BE_REPLACED