The sound of women laughing and making jokes are all one can hear standing outside the Tailoring Workshop container at the Women and Girls Oasis in Zaatari refugee camp located in the Jordanian Governorate of Mafraq, close to the Syrian border.

It is estimated that more than 70,000 people have been killed and more than three million displaced both within and outside of Syria since the uprising against President al-Assad began in March 2011[i]. This week, the heads of five United Nations agencies called on political leaders to meet their responsibility to the people of Syria and to the future of the region[ii]. According to the UN Refugee Agency (UNHCR), 432,263 Syrian refugees had fled to Jordan as of 15 April[iii]. Half of them are now living at the Zaatari camp[iv].

The Tailoring workshop takes place in an open area of the camp surrounded by nine large white port containers where women take part in various stages of clothing production. Opening the door of one of the containers, one enters a brightly lit space where some smiling women sit behind eight sewing machines working on colourful fabrics. There are four rows of sewing machines, two in each row. The remaining empty space is occupied by other women waiting for their turn to get behind the sewing machines and finish the pieces they are working on. 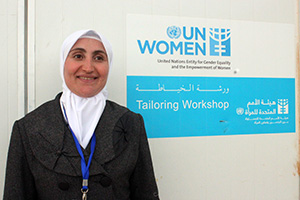 The Tailoring Workshop has brought a little joy back to the lives of Syrian Refugees at the Zaatari camp, such as for 36-year-old Fatima. Photo: UN Women/Yara Sharif

Two very eager women, Fatima (36) and Hajar (36), welcome visitors and are very open about sharing their work and stories.

“My husband is an injured military defector. He cannot work so I took it upon myself to help provide for him and my three kids. By mere chance, a woman told me about UN Women’s oasis and the tailoring workshop and here I am. It is the best thing that ever happened to me since we fled Syria three months ago,” says Fatima, beaming while Hajar nods her head in agreement.

At the Syrian refugee camp of Zaatari, UN Women Jordan is supporting the establishment of a “safe space” named “Women and Girls Oasis.” The “cash for work” programme enables Syrian women refugees who are professional tailors and hairdressers to work six hours a day in the workshops and earn a living. The tailors sew newborn outfits for babies that are delivered at the hospitals operating within the camp.

Hajar, another participant, opens up and speaks with incredible candor about the hardships she has faced: “I have been through a lot and did not expect my life to turn out the way it did. I fled Syria with my five children because I received threats on my son’s life. I left everything behind, my house, my husband and all my belongings and embarked on a trip to the unknown. I reached the camp already depressed with very few words to exchange with others. At some point, my words got stifled by sadness, the smile left my face and tears became a permanent companion.” 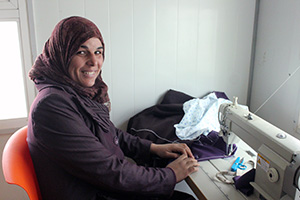 Hajar used to be a professional tailor in Syria and says doing this work again has helped her deal with the sadness of abandoning her country. Photo: UN Women/Yara Sharif

However, Hajar says her grief started to gradually dissipate after learning about the Tailoring Workshop. As a professional tailor, she became involved, in the activities taking place in the Oasis, along with some 300 women and teenage girls. They do tailoring, hairdressing, drawing, English classes, mosaic and handcrafts as well as learning gymnastics.

The impact of the Oasis goes far beyond a mere source of income for these women. The growing bonds and trust formed with the Oasis’ staff and other women have encouraged many to speak out about taboo subjects such as gender-based violence in the private sphere. They exchange stories, and no longer shy away from sharing their experiences about psychological and emotional violence they face in their homes.

The Oasis has allowed refugee women to take advantage of this safe haven and experience a different and unexpected role in the camp’s social life, as well as within their own family structure. They have become the breadwinners and their contribution to their households is well recognized by their husbands, as Fatima indicates. The Oasis is considered an intervention that has brought smiles back to the faces of Fatima and Hajar.

“We have hope now! We feel safe, and are looking forward to the day when we go back to a peaceful and stable Syria,” Hajar concludes.