Data collection on social and economic development has come a long way, particularly since the Millennium Development Goals (MDGs) — the eight anti-poverty goals internationally agreed upon more than a decade ago. Yet, much remains to be done, particularly in the area of gender statistics, which can help to illustrate the impact development policies have on women’s lives. For example, only a little over one-third of Governments regularly generate statistics on their citizens’ access to clean water, which directly impacts the women who spend hours collecting it; and while the figures are somewhat higher when it comes to measuring violence against women, only 41 per cent of States do so regularly. [1] But very little of this data can be compared between countries because of differences in how violence against women is currently being measured. 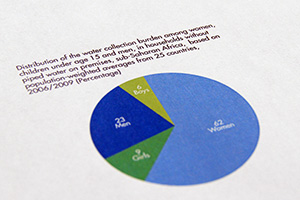 This situation is about to change due to a recent development of new gender indicators, which were agreed by the United Nations Statistical Commission as a guide for national and international data compilation. They include a new set of nine ground-breaking indicators specifically designed to measure violence against women in all its aspects, including physical, sexual, psychological and economic violence as well as a separate minimum set of 52 gender indicators developed by the Inter-Agency and Expert Group on Gender Statistics.

The minimum set covers economic structures, participation in productive activities and access to resources, education, health and related services, public life and decision-making, and human rights of women and girls — all of which were highlighted in the 1995 Beijing Platform for Action.

Accurate data is critical to inform policies such as women’s better access to healthcare and education, or to push for international attention to often-ignored issues such as unpaid domestic work and its impact on women’s rights and choices. The new indicators are also important as a guide to collect national data, which is crucial for planning and budgeting. At a global level, being able to measure and compare the progress made with reliable data provides an important basis for setting global norms and standards, as well as for effective policy and development assistance.

“Reaching agreement on these indicators represents a significant breakthrough after many years of lobbying by civil society and the international community,” said UN Women Acting Head Lakshmi Puri. “Efforts by the Inter-agency and Expert Group on Gender Statistics, particularly the UN Statistics Division, have been instrumental to develop this minimum set. UN Women has been fully engaged in this process. We especially applaud the first-ever agreement on indicators on violence against women as a crucial step to improve efforts for prevention, protection, prosecution and provision of services to survivors of violence.”

The nine specific gender violence indicators will measure the total number and age of women subjected to physical, sexual, psychological or economic violence, as well as to the practice of female genital mutilation. They will also measure the severity and frequency of the violence and the survivor’s relationship to the perpetrator.

The minimum set of 52 gender indicators will measure economic factors such as the gender gap in wages, the proportion of the population with access to credit, the average number of hours spent on unpaid domestic work (including separate information on housework and childcare), and the percentage of firms owned by women, to name just a few. In terms of education, health and other areas, measures include enrollment rates, the maternal mortality ratio, adolescent fertility rates, child marriage, etc. [2]

The minimum set of gender indicators is a testimony to the increased recognition of the importance of gender statistics in evidence-based policymaking. As the Millennium Development Goals have shown, having adequate statistics is critical for monitoring international agreements. Hence, with the MDGs’ 2015 deadline approaching and the need to devise a new global roadmap for development (known as the post-2015 agenda), it has become all the more pressing to get adequate indicators and baselines for future monitoring.

This was echoed by the global inequality consultations — conducted in 2012-13 and co-hosted by UN Women and UNICEF — which concluded that a new Post-2015 Development Agenda should “include not only a universal goal for gender equality and the empowerment and advancement of women and girls, but also ensure that gender and other dominant inequalities are mainstreamed in all relevant areas through disaggregated targets and indicators.”

In parallel and linked to the minimum set, the UN has been working with national statistical offices to develop common standards and improve how they collect official data. As an example, UN Women and the UN Statistics Division, in collaboration with the World Bank and OECD are now working on a new initiative called Evidence and Data for Gender Equality (EDGE) to accelerate existing efforts to generate comparable gender indicators on health, education, employment and develop standards to measure entrepreneurship and assets from a gender perspective. These standards will be developed and tested in several countries over the course of three years.

[1] Of the 126 countries surveyed by UN Regional Commissions, 45.2 per cent of States are not collecting statistics on access to clean water; 44.4 per cent do not gage their citizen’s access to sanitation; and while only 28.6 do not measure violence against women, of those that do, only 40.5 per cent do so regularly. Gender Statistics Report of the Secretary-General (p. 11)

[2] For a detailed list of the 52 indicators, see the Gender Statistics Report of the Secretary-General (p. 12-14)