“The power to stop even one woman or girl from being raped and take appropriate action when there is an incidence of sexual violence must be one of the most meaningful things that a peacekeeper can do,” said Clara Anyangwe, UN Women’s Deputy Representative in Rwanda, during her closing remarks to a two-day training course for peacekeepers. “Women and girls look up to peacekeepers for protection. It is not a privilege; it is their right.” 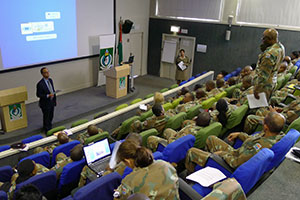 From 29-30 July at Pretoria’s Peace Mission Training Centre in South Africa and from 14-15 August at the Rwanda Peace Academy in Musanze, UN Women and the UN Department of Peacekeeping Operations (DPKO) trained 100 high-ranking military officers on how to prevent and respond to conflict-related sexual violence in peacekeeping missions.

The course was part of the UN’s scenario-based training modules developed by UN Women and DPKO, which use context-setting video clips, photos and other audiovisual tools to set the scene for troops and officers and trigger discussion on sexual violence in armed conflict. The training course is based on actual situations and role-playing exercises that help the trainees think through the appropriate course of action when faced with an incident or threat of sexual violence.

Since April 2011, when UN Women and DPKO piloted these new modules in Bangladesh, more than 500 military officers have been trained in seven of the top UN troop-contributing countries, as well as in two multi-country regional trainings. Hundreds more have been trained in over a dozen other countries, as these trainings have been incorporated into courses on gender and peace operations and protection of civilians, as well as regular courses for contingent commanders and mission leadership.

Rwanda and South Africa rank sixth and fourteenth respectively on the current list of troop-contributing countries. Both South Africa and Rwanda have taken important steps to integrate gender equality concerns into their security sectors and peace operations. The percentage of women employed in South Africa’s military, for example, is one of the highest in the world. During the course in Pretoria, 40 per cent of participants were female military officers.

Although in Rwanda only 14 per cent of participants were women, the percentage is still higher than the global average of women’s participation in the military component of current peace operations, which is only three per cent, and mostly as support staff. Furthermore, Rwanda recently deployed an all-female police unit to the UN Peacekeeping mission in Côte d’Ivoire. Its military contingent in Darfur has also been instrumental in conducting systematic patrols to escort women and girls when they collect firewood or water and reduce their vulnerability to sexual assaults.

According to Colonel Jill Rutaremara, Director of the Rwanda Peace Academy, the training intends “to arm uniformed peacekeepers with positive illustrative examples of how to effectively respond to sexual violence in conflict and post-conflict environments.” 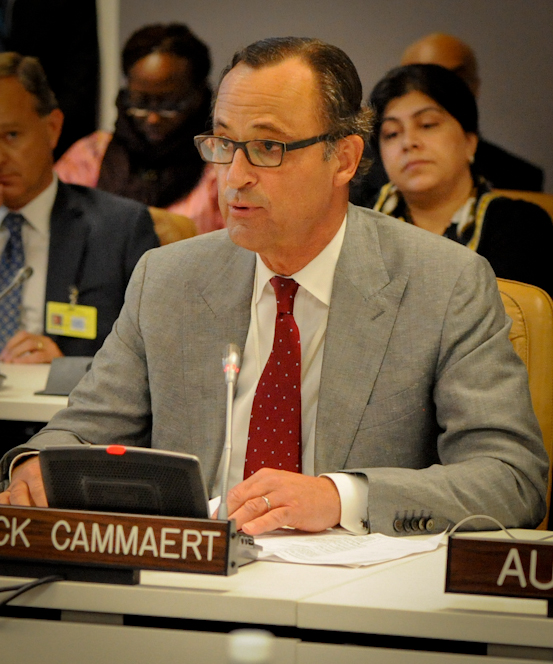 The lead instructor for the training was Major General Patrick Cammaert, who after retirement in 2007 has continuously collaborated with UN Women. He has during active service worked in Bosnia, Cambodia, Ethiopia and Eritrea, and the Democratic Republic of Congo, and as a UN Military Advisor.

In his closing remarks to the participants, UN Women’s Deputy Representative, Sadiq Syed, said: “Equipping peacekeepers, who are on the frontlines, with knowledge on women’s rights and gender will go a long way in prevention and effective response to Gender-Based Violence in conflict situations.”

Currently, peacekeepers rarely receive even one day of practical training on prevention and response to conflict-related sexual violence.

At the end of the courses, the majority of participants unanimously agreed that the two-day course should be longer and mandatory for every officer in pre-deployment training. Participants reported having a greater understanding of their mandate to protect civilians (based on the UN Charter), the rules of engagement, and ways of enhancing the protection of women and girls.

“There are many things I can do as a peacekeeper that would protect women and girls, from targeted patrols to community outreach, intelligence gathering and quick impact projects devoted to the urgent needs of women and girls,” said one participant in the feedback survey in Rwanda. “We need continuous training and sensitization of peacekeepers about these issues and more women in our troops.”

Related News
14/05/2013
In the words of Saran Keïta Diakité: Girls receive a visit from a different man every night, a ‘new husband’
28/11/2012
Setting the scene: using audio-visual tools to train peacekeepers to respond
27/05/2021
UN Women Executive Director visits Mozambique, calls for women’s leadership in peacebuilding and ongoing humanitarian efforts, and bold commitments for the Generation Equality Forum
05/12/2018
Joint UN-AU Statement on Conflict-Related Sexual Violence in South Sudan
14/06/2018
From where I stand: “We need men who will stand up for the rights of women and girls”
END_OF_DOCUMENT_TOKEN_TO_BE_REPLACED