Ms. Phumzile Mlambo-Ngcuka took the oath of office as the Executive Director of UN Women during a ceremony today at UN Headquarters presided over by Secretary-General Ban Ki-moon. 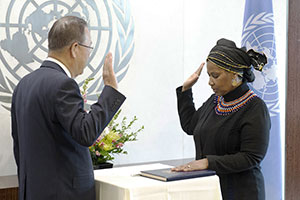 Phumzile Mlambo-Ngcuka was sworn in as Executive Director of UN Women by United Nations Secretary-General Ban Ki-moon at 8:45 am on 19 August 2013. Photo: UN Photo/Evan Schneider

She is the second Executive Director of the organization created in 2010 to lead the UN’s work on advancing gender equality and women’s empowerment. Ms. Mlambo-Ngcuka’s appointment was announced by the Secretary-General on 10 July 2013.

A South African national, Ms. Mlambo-Ngcuka brings to her new position a wealth of experience. She was the first woman to hold the position of Deputy President of South Africa from 2005 to 2008. She became a Member of Parliament in 1994, chairing the Public Service Portfolio Committee. She was Deputy Minister in the Department of Trade and Industry (1996-1999), Minister of Minerals and Energy (1999-2005) and briefly served as acting Minister of Arts, Culture, Science and Technology in 2004.

Ms. Mlambo-Ngcuka was Young Women’s Coordinator for the World Young Women’s Christian Organization in Geneva (1984 – 1986) and served as the first President of the Natal Organization of Women, an affiliate of the United Democratic Front, when it was formed in December 1983. She established the Umlambo Foundation in 2008 to provide support to schools in impoverished areas in South Africa through mentorship and coaching for teachers and in Malawi through school improvements with local partners. She holds a Master’s degree in Philosophy in Educational Planning and Policy from the University of Cape Town (2003) and a BA in Education from the University of Lesotho (1980). In 2003, she was awarded an Honorary Doctorate from the University of Western Cape.

Related News
26/03/2014
My Mother Always Told Me Inaction Is Not an Option
10/07/2013
Phumzile Mlambo-Ngcuka from South Africa appointed as new UN Women Executive Director
27/12/2022
Statement: The decree barring women in Afghanistan from working in non-governmental organizations is yet another stark violation of women’s rights
04/11/2022
UN Women at a time of change
14/09/2022
Speech: Working together for the world’s women and girls
END_OF_DOCUMENT_TOKEN_TO_BE_REPLACED