Tunisia’s new Constitution has captured international headlines. It enshrines many rights for women and is step in the right direction, according to many Tunisians.

Sana Ben Achour, women’s rights activist and law student, stresses that this Constitution is the first in the Arab world to give all Tunisians, women and men, the right to be presidential candidates. Similarly, she says that “Article 46 is proof of an impressive advance. From the outset, it safeguards the rights won by Tunisian women by referring to the Code du Statut Personnel (Personal Status Code) of 1959. Back then, the Code established a rights and freedoms panel unheard of in the Arab world. These included the right to divorce, to marriage by mutual consent and also the banning of polygamy.” 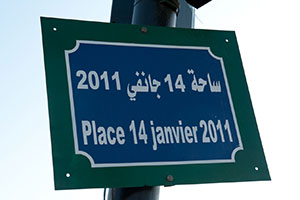 A plaque for Place de 14 janvier, 2011, a plaza in Tunis named after a meeting place during the revolution. Photo: Arne Hoel / World Bank

In addition, Ms. Ben Achour said that the State will ensure that there was gender equality in the workplace and it would encourage equality, notably through affirmative action measures.

“Article 46, on equality, guarantees parity between men and women in all elected assemblies, – which is even more progressive considering this has not even been included in the constitutions of the majority of western countries,” said Héla Skhiri, National Programme Officer for UN Women in Tunisia.

These advances are the result of many months of hard work and sustained advocacy. Led by civil society groups, with the support of UN Women and various other organizations, Article 20 guaranteeing equality of rights and responsibilities, was finally passed.

In the lead-up to the vote, UN Women partnered with the NGO Tunisian Association of Democratic Women (ATFD), as part of the project titled “Women’s March for a Constitution integrating Equality and Citizenship”, to ensure quality and targeted contributions of civil society organizations during Tunisia’s participatory constitution-drafting process. As a result, members of ATFD and other NGOs consulted and identified strong gender equality arguments that enabled them to carry out evidence-based outreach and advocacy within their respective communities and strengthen their effective participation in the constitution-making process.

To support the constitution-making process, in March 2013 UN Women also supported the Centre for Research, Studies, Documentation and Information on Women (CREDIF) in organizing advocacy events including a high-level debate on the integration of the principle of parity in the Constitution. The event gathered members of the National Constituent Assembly (NCA), government policymakers, and civil society representatives at a crucial moment in the drafting process.

UN Women, in partnership with the Ministry of Women and Family Affairs (MoWFA) and the Wilson Center (Global Women’s Leadership Initiative), also brought together diverse stakeholders at a roundtable on “women’s rights in the making of the Tunisian Constitution” in April 2013 in Tunis, aimed at an exchange of experiences and best practices between different countries of the region on integrating gender equality principles in national constitutions. During the event, 36 participants from governmental institutions and NGOs shared their countries’ experiences in the inclusion of principles of gender equality, human rights and non-discrimination in their respective constitutions.

Hafidha Chekir, lawyer, activist and founding member of the ATFD, took part in these processes. Speaking about UN Women’s important work on the ratification of CEDAW and other rights instruments, she says, “It is important that, in partnership with civil society, it continues to encourage the lifting of restrictions as stipulated in the Constitution. Indeed, it is formulating a positive text and confirming the superior legal force of international conventions. This means that the State is obliged to fulfil its international commitments."

While expectations are high regarding the new Constitution adopted in January, there are concerns.

Ms. Chekir underlined that "in terms of political rights, Article 34 sets out the representation of women in elected assemblies. However, it does not apply to the Government."

Furthermore, the majority of the rights stated refer to the public sphere and are associated with citizenship.

Last year, the Tunisian Government undertook to adopt specific measures to combat gender-based violence through its National Action Plan for the Elimination of Violence against Women, as part of UN Women's COMMIT initiative.

UN Women supports various organizations that fight violence against women in Tunisia and around the world. The organization's efforts for the rights of women include raising awareness on gender equality issues, which will be essential for cementing the new Constitutional guarantees.

"This effort will not be meaningful in practice unless all Tunisians together also participate in establishing this foundation," says Ms. Skhiri. "UN Women can make a real difference as it provides support for effective working and advocacy on the part of civil society in influencing strategies and policies through partnership with government bodies. In addition, and most importantly, it contributes to integrating principles of equality in people's minds."

Related News
25/07/2017
From where I stand: “Women have to be at the heart of the Africa of tomorrow”
13/09/2013
Strengthening Voices for Democracy
16/06/2011
Executive Director of UN Women to Focus on Central Role of Women in Democracy on First Official Visit to Tunisia
13/11/2019
I am Generation Equality: Racha Haffar, anti-trafficking activist
16/07/2019
Reforming the laws that forced women to marry their rapists
END_OF_DOCUMENT_TOKEN_TO_BE_REPLACED