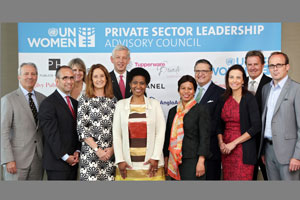 At a special event at United Nations Headquarters, the 10 founding corporate leaders were welcomed by the Under-Secretary-General and Executive Director of UN Women, Phumzile Mlambo-Ngcuka.

Under the Executive Director’s leadership, the influential Council will offer advice on three specific areas: accelerating women’s economic empowerment, ending violence against women and helping to close the funding gap for UN Women.

“This Council’s focus is to accelerate economic and social progress for women and girls worldwide by combining our expertise, reach and resources for greater results,” said Ms. Mlambo-Ngcuka. “The Council is being launched at just the right time, as UN Women mobilizes for the 20th anniversary of the Beijing Women’s Conference under the theme: Empowering Women, Empowering Humanity.”

The invitation-only Council is comprised of prominent private sector leaders, whose companies have a global footprint and identify as corporate citizens that already demonstrate a strong commitment to supporting women and girls.

“Given our mandate in advancing gender equality and the empowerment of women, we hope that the Council will provide the foundation necessary to further expand diversified representation in terms of company size, region, and increased female membership,” said Ms. Mlambo-Ngcuka.

“Empowering women is one of the most important ways we can accelerate growth across the global economy,” said Muhtar Kent, Chairman and Chief Executive Officer of The Coca-Cola Company and first Chair of the UN Women Private Sector Leadership Advisory Council. “By bringing together corporations, government and civil society through Golden Triangle partnerships, we can positively impact women, their families and their communities. I’m honoured to chair this new council and confident that we can make meaningful progress engaging with the private sector on this important work.”

The 10 founding members are (in alphabetical order):

Related News
18/09/2022
Speech: Breaking remaining barriers for women and girls in Africa
13/07/2022
Speech: Our ability to fulfil the SDG’s promises depends on our decision to put women and girls at the centre
24/05/2022
Speech: Women’s land rights are intrinsically and vitally linked to gender equality
08/03/2022
Speech: We must give peace a chance
14/10/2020
International Day of Rural Women theme: “Building rural women’s resilience in the wake of COVID-19”
END_OF_DOCUMENT_TOKEN_TO_BE_REPLACED