Through summer schools and special youth workshops, students and teachers across Kyrgyzstan are learning how to empower girls and become young gender activists in their own schools and communities.

By the shores of the deep blue Issyk-Kul Lake in the Tian Shan Mountains in north-eastern Kyrgyzstan, the sound of happy adolescent laughter echoes across the normally tranquil Sinegorye resort. In July 2014, more than 40 students and several teachers from seven regions of Kyrgyzstan gathered there to learn skills and deepen their knowledge of gender equality and the empowerment of girls.

Dilshat Mashanlo, 17, from Yusuf Hazret Secondary School, shared his reflections: “We had never thought that violence could affect a country’s economy; this information was shocking. We have changed a lot during the last four days. If you had compared us before and after training, you would see a huge difference in our perception of violence and our willingness to take action where we see or face it.” Dilshat is now planning to create an informal male club to promote gender equality in his community.

The trainings are part of a project funded by the UN Peacebuilding Fund at the specific request of Kyrgyzstani President Almazbek Atambayev, to foster respect and tolerance among youth, in response to inter-ethnic violence that swept the cities of Osh and Jalalabad and surrounding areas in June 2010.

Gaining an understanding of inequality, gender-based violence, violence against women and crimes such as bride kidnapping and forced early marriage, participants also learned about how the Kyrgyz Republic Constitution protects their rights in line with international conventions that States are obligated to guarantee. Students also learned about the duties of citizens. 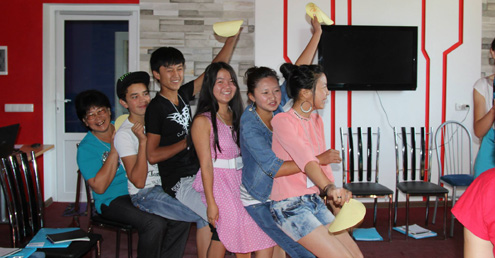 “We have heard that we are not alone and UN Women is dealing with these problems,” said Madina Dadaeva, an 11th grader from Pushkin School in the multi-ethnic Uch-Korgon village, Batken province. “Currently, I am working on a project which will bring about changes in my school in terms of gender justice. It is called ‘Stop Marriages That are Forced by Parents’. After discussing the problem with my teacher, we came to a conclusion that about 30 per cent of female classmates are forced into arranged marriages after graduating from our high school, losing their right to continue studies later on. But I believe that we will be able to decrease this number and this will become my own small contribution to improving society!”

From September onwards participants will act as peer-educators and recruit other students to work with them during the school year. Concretely, the group will identify gender inequality problems in their schools and communities, draft action plans to improve the situation, then implement and report on them.

Grade 11 students from Issyk-Kul province present an action plan for raising awareness among girls of the benefits of education. Photo: UN Women/Umutai Dauletova

Teachers will also play a catalytic role by teaching the course “My Safe and Peaceful School” that has been developed by UN Women with funding from the European Commission and the Peacebuilding Fund, with the support of the Ministry of Education and district education departments.

Yusupova Wunger, a teacher from the Yusuf Hazret school in Jeti Oguz district praisedthe training’s simple, relevant, and interactive approach. “For example, a play about bride kidnapping, performed by students, was very touching. Although we often do not witness these crimes, we were able to sympathize with victims of such an injustice and mobilize us to prevent it since this performance depicted their feelings and awful experience. The training tackled issues relevant to our community. I would like our school curriculum to include courses that will discuss questions introduced in civil law studies.” 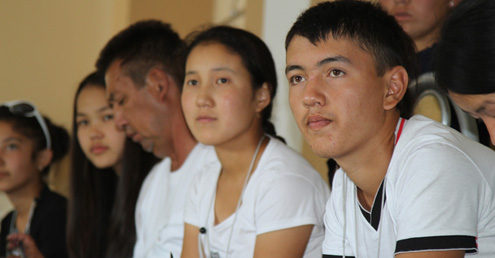 The first round of trainings is being held during summer vacations, with subsequent trainings planned for December and  March in their home provinces. The subsequent parts of the course will focus on preparing students to conduct conflict analysis and engage in prevention, participatory social research and other life-skills. In total this year there will be 15 sets of trainings for a total of about 200 peer educators and 80 teachers from 30 towns and villages throughout Kyrgyzstan.

Munira Noruzbaeva, a trainer with UN Women, said: “I have found every participant to have very inspiring ideas and unique skills. Children want to be active, and we will support them in their endeavors until the end.”

Students and teachers will spent the next several months developing actions plans and serving as gender champions in their schools and community. Photo: UN Women/Umutai Dauletova
Related News
14/11/2016
From where I stand: Aiturgan Djoldoshbekova and Aigul Alybaeva
11/04/2022
Speech: Women’s involvement is both a right and an opportunity for better outcomes
15/11/2017
From where I stand: “Ending violence against women and girls is hard work, but it’s not impossible“
09/08/2017
In Kyrgyzstan, youth are at the forefront of building peaceful communities
02/02/2017
Women forge peace along the Kyrgyz-Tajik border
END_OF_DOCUMENT_TOKEN_TO_BE_REPLACED