In Kyrgyzstan, youth are at the forefront of building peaceful communities

A UN Women supported programme in Kyrgyzstan has empowered 15,000 young people to prevent violence, promote gender equality and build tolerance of diversity in their communities. The initiatives are teaching about respectful relationships and livelihood skills to young people in remote villages. 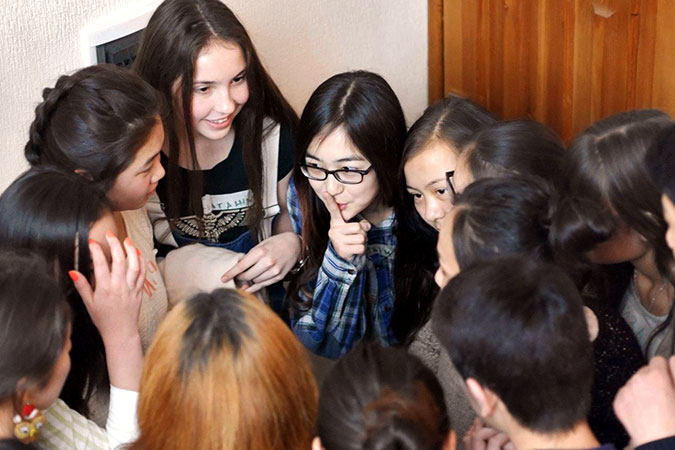 It’s Saturday morning in Asylbash village, located in the northernmost Chui region of Kyrgyzstan. Fifteen-year-old Diana Ruslan kyzy is preparing to go to school for a peer education session with her classmates. They will discuss about violence against women and girls in their community and organize local initiatives.

Ruslan kyzy is an “agent of change”. As part of UN Women’s “Building a Constituency for Peace” programme, funded by the UN Peacebuilding Fund, more than 15,000 of Kyrgyzstan’s young people aged between 14 and 17 years—two-thirds of them girls—are taking action in their communities to protect the rights of women and girls.. They lead education sessions with their peers in almost 100 schools; engage with local authorities to hold them accountable on implementing existing laws to protect women and girls; and partner with civil society organizations to steer local peacebuilding initiatives. 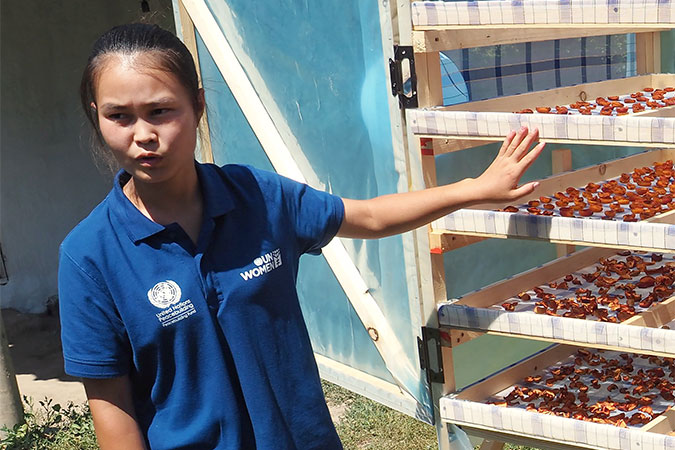 “With UN Women’s help, I have gained knowledge of human rights and entrepreneurship skills. We have learnt to build teams of girls and boys with different views, ethnic backgrounds and religious beliefs. Today we work together to tackle problems such as early marriage, bride kidnapping and domestic violence, and teach respect for diversity in our communities,” says Diana Ruslan kyzy.

Engaging youth across ethnic divides helps build social cohesion and inclusion. In rural Kyrgyzstan, this is an innovative concept.

“In Kyrgyzstan, young people were often side-lined from peace initiatives. Recognizing this, UN Women started empowering secondary school students so that they grow up to be agents of change in all walks of life, ensuring there is peace and justice for everyone,’’ explains Gerald Gunther, UN Women Representative in Kyrgyzstan.

Since 2012, UN Women has been working with local partners to build both life and livelihoods skills of youth in Kyrgyzstan through a number of initiatives, generously funded by the European Union, the UN Peacebuilding Fund and the Government of Finland. Girls are taught about their rights and provided with business skills, so that they can contribute towards their families’ income as they grow up. This also helps in delaying early marriages, which many girls face in the country. Similarly, boys gain livelihood skills, such as how to use limited natural resources effectively, while learning to appreciate gender equality.

One such initiative is a youth empowerment and tolerance course titled, “My Safe and Peaceful School”, which is delivered by peer-educators who have been trained by UN Women. The course prepares young people for responsible citizenship by teaching them teambuilding and advocacy skills, and about human rights and gender equality, which they then spread through their networks. For instance, often male peer-educators reach out to their teammates in soccer clubs to advocate for equal and respectful treatment of girls.

In parallel with the peer education initiative, UN Women supports a local partner, Rural Advisory Service, to train teachers to run another course titled, “My Prosperous Farm”, which engages students in kitchen gardening, processing and marketing of agricultural products.

Diana Ruslan kyzy and Aigul Bektemirova are both peer educators, and have also been trained in kitchen gardening and fruit processing skills. 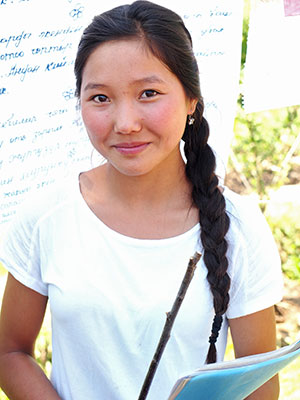 “I knew I had to do something to help stop early marriage. So, I started telling our villagers about the negative effects of child marriage,” explains Aigul Bektemirova. “I also do my best to persuade them to stop the practice of religious marriage with minors, where there is no civil registration.”

The girls, along with their peers, have organized various advocacy and awareness raising events on gender-based violence, involving their school administration, parents and representatives of the local authorities.

Aibek Muratov, a 15-year-old boy from Jumgal, a mountainous district with harsh winters, also participated in “My Prosperous Farm”. He proudly shows his compost heap, greenhouse and other innovations in the small plot of family land, which he tends after school.

“Before I got involved in this project, I thought that after graduation from school, I would kidnap a girl—which had become a common practice in our village—and make her stay at home and attend to all the chores while I work abroad,” says Aibek. “But now I want to court and marry a girl who is educated and wants to be with me. I will treat her as an equal and we can work on our land together.”

Aibek is a strong advocate for girls’ education and appeals to his male peers to reject bride kidnapping—the practice of abducting a girl for marriage—which often condemns girls to servitude and early pregnancy.

UN Women will continue to support “My Safe and Peaceful School” and “My Prosperous Farm” in 100 villages across Kyrgyzstan through 2020. Both courses have recently been approved by the Ministry of Education for nation-wide roll out. Healthier relationships, delayed pregnancy and less community disruption through migration are some early results of the initiatives.