What:
The first-ever global study on female characters in popular films was commissioned by the Geena Davis Institute on Gender in Media, with support from UN Women and The Rockefeller Foundation and conducted by Stacy L. Smith and her research team at the Annenberg School for Communication and Journalism at the University of Southern California. The investigation analyses popular films across the most profitable countries and territories internationally, including Australia, Brazil, China, France, Germany, India, Japan, Russia, South Korea, United States, United Kingdom, as well as UK-US collaborations. 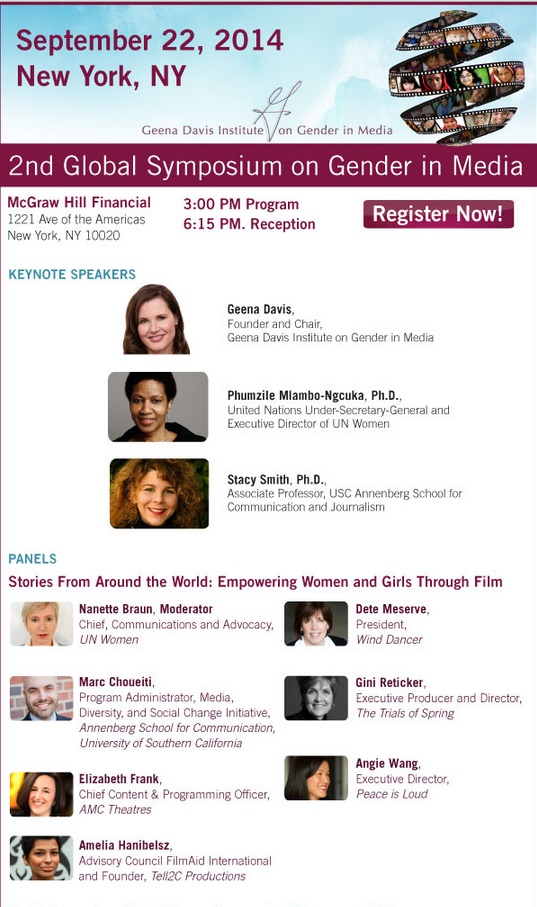 Click here to view the full invitation
Related News
01/07/2013
UN Women Partners with Geena Davis on First-ever Global Gender in Film Research Study
06/03/2013
Presentation by Michelle Bachelet and Julia Duncan Cassell at a side event on the COMMIT Initiative
22/02/2013
One Woman song to be released on International Womens Day
14/12/2012
Press Release: Countries from every region announce new initiatives to end violence against women
18/02/2013
Governments, rights advocates and experts from across Asia and the Pacific gather to unify efforts to end violence against women ahead of CSW57
END_OF_DOCUMENT_TOKEN_TO_BE_REPLACED