Voices of indigenous women and girls in the post-2015 agenda 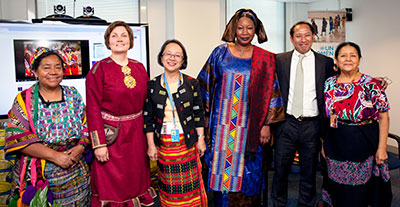 As world leaders gather for the sixty-ninth session of the General Assembly in New York, all sights are set on the development of the post-2015 agenda. A high-level panel discussion today, against the backdrop of the first-ever World Conference on Indigenous Peoples (22-23 September), reaffirmed the need to include indigenous women in these international processes and renew commitment to achieving the Beijing Declaration and Lima Plan of Action.*

“Sadly, we have not achieved all those rights we have committed ourselves to in Beijing. We have to recommit to them today,” said UN Women Executive Director Phumzile Mlambo-Ngcuka, in her opening remarks at the panel hosted by the International Forum on Indigenous Women (FIMI) and UN Women.

During the panel, entitled “Affirming the Beijing and Lima Plans of Action for Indigenous Women and Girls”, speakers addressed issues of violence against indigenous women, economic justice and political representation during a question-and-answer period, followed by a lively discussion with audience members.

In Guatemala, where indigenous women and girls often face brutal sexual violence, women are looking for allies in their fight for basic rights, said Rosalina Tuyuc Velásquez, a Mayan human rights activist who spoke in the panel.

“For many indigenous women, it still feels like we’re at war, because it didn’t just trample our dignity, it also took away our voice,” she said. “It’s not enough to have an organization, to participate in decision-making. We need to form alliances and have allies that will support us.”

Soyata Maiga, Special Rapporteur on Women’s Rights and Chairperson of the Working Group on Indigenous Populations/Communities of the African Commission on Human and Peoples Rights highlighted the lack of access to education, health services, economic opportunities and decision-making roles that indigenous women face, particularly in Africa. 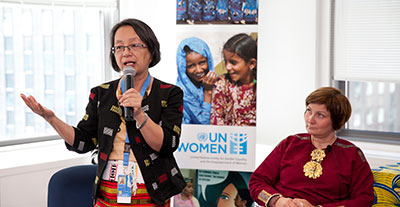 Bringing another perspective to the discussions, Vicky Tauli-Corpuz, Special Rapporteur on the Rights of Indigenous Peoples and veteran activist, said such issues also affect indigenous peoples in Asia and around the world and that we must work with grass-roots women to effect change. The sentiment was echoed by Raja Devasish Roy, a Traditional Chief from Bangladesh and Member of the UN Permanent Forum on Indigenous Issues.

Other speakers shared personal stories of discrimination in the political sphere. The first Mayan woman to serve as Guatemala’s Minister of Culture and Sports from 2000-2004, Otilia Lux de Coti faced smear campaigns by journalists who argued she could not properly run a ministry because she was an indigenous woman.  “But I challenged all of that,” she said.

The Executive Director of FIMI, Ms. de Coti underlined that this kind of harassment and violence against women is exactly what the Beijing and Lima declarations seek to address.

On a positive note, Aili Keskitalo, President of the Sami Parliament of Norway, who spoke about Sami women’s process of achieving gender equality in parliament, relayed her hope that their experiences might serve as an example and offer assistance to other indigenous women who are working to achieve the same ideals.

Ms. Mlambo-Ngcuka reiterated the crucial role indigenous women played in developing the 1995 Beijing Declaration, and the success they had in making their voices heard. With the development of the post-2015 agenda underway, she stressed that this is a formative time for women’s rights and that the next 15 years should be seen as “the last mile” to resolve the challenges that all women face.

*The Beijing Declaration makes commitments to 12 areas of critical concern for women’s rights, while the Lima Plan of Action addresses indigenous women’s issues, including their involvement in decision-making processes.